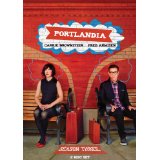 Oregon may have been the 33rd state to join our union — and Portland may be its most populous city — but Portlandia is a (dog-dressing, raw milk-drinking, Seattle-hating) state of mind. And after three seasons of lovingly mocking upper middle class indulgence along with the denizens of the Pacific Northwest, Portlandia — created by stars Fred Armisen, Carrie Brownstein and director Jonathan Krisel — feels more like a fully-realized destination than ever.

Armisen and Brownstein still star in almost every sketch, and the versatile duo has created a solid stable of recurring oddballs to anchor the show. The Portlandia “Winter Special” — which aired a few weeks before the season 3 premiere on IFC — features some of their most popular creations: feminist bookstore owners Toni and Candace try to get Candace’s son to accept (another) vagina pillow, while a Peter and Nance sketch finds ineffectual Peter deciding to cut pasta from his diet to hilariously disastrous results.

But the most surprisingly rewarding part of watching the show at this point is the familiarity the audience has developed with this kooky version of Portland, not to mention the non-actors who populate the rest of the cast. It’s a difficult trick for a sketch comedy series — which, by nature, tends to rapidly hop from one wildly different character or setting to another — to pull off. As a result, we get moments like Ronald D. Moore (not the one who created the new Battlestar Galactica) and his wife resurfacing from their fantastic season 2 outing “One Moore Episode” to try out Peter and Nance’s bed & breakfast during this season’s Ep. 7/“Soft Opening.” It’s also good to see returning weirdos like the persuasive shop owner played by guest Jeff Goldblum (this time selling doilies instead of knots) and the deeply infuriating customer service stylings of comedian/Portlandia favorite Kumail Nanjiani.

Although most episodes remain a series of sketches that aren’t necessarily connected to one another, season 3 of Portlandia experimented more with single-story structure and serialized plots than ever before. Previously, the only episode I remember that had a single, unifying storyline was season 2 finale “Brunch Village”; this season featured two such episodes: Ep. 3/“Nina’s Birthday” and the season finale “Blackout.” Ep. 2/“Missionaires” introduced Alexandra (guest star Chloe Sevigny), a Seattle resident who Fred and Carrie — the “Bert & Ernie”-like platonic best friends that most closely resemble Armisen and Brownstein — recruit as a Portland citizen. Sevigny pops up briefly in subsequent episodes, but watching Alexandra come between Fred and Carrie in the season’s final three episodes is mostly a drag. The somewhat serialized storyline involving the Mayor of Portland (an effortlessly funny Kyle MacLachlan) being named the city’s #1 electricity hog and going “Off the Grid” (Ep. 5) was more successful.

In fact, there’s plenty of funny stuff sprinkled throughout the entire season. Armisen, Brownstein and Co. continue to take aim at hyper-specific comedic targets. That means there are moments when the humor can sail right over a segment of the audience’s head. (I’m thinking of guest star Patton Oswalt playing a guy who specializes in funny Evite replies.) The upside is that when the Portlandia crew hits your satirical sweet spot, the results are flat-out genius. For me, these included a Winston Wolf-esque fixer who helps a huge dinner party figure out how to split their bill, a financially-strapped couple dismayed at the number of friends who are having birthdays in a single month, and the observation that “everyone on the Internet…they’re not having as great a time as you think they’re having…they crop out all the sadness.” I also appreciated that there was a sequel of sorts to the great “Bad Arts/Good Walls” skit from season 2 (even if it was the somewhat inferior “Japanese Toys/Cool Offices”), and I totally sympathized with the character who sadly/succinctly pointed out the problem with tapas: “they’re small plates, but they cost as much as normal plates.”

Other standout moments included the ill-conceived attempt to “Take Back MTV” (sounds great in theory, but really…people have moved on) featuring past VJ’s Kurt Loder, Tabitha Soren and Matt Pinfield. Portlandia also takes on annoying people who ban you from talking about movies or TV shows (sometimes for years) because they haven’t watched them yet in “Spoiler Alert.” Besides cleverly and obliquely spoiling every major movie and TV show — if you’ve never seen the show they’re talking about, the reveals won’t mean anything to you— the skit showcases the percussive storytelling sensibility favored by the creative team. (Armisen and Brownstein each have musical backgrounds.) I was also amused by the bit involving a true nerd’s rant against hot girls who throw on glasses and call themselves nerds, as well as guest star Roseanne Barr’s turn as a temporary mayor who attempts to make Portland into more of a “real city.” (Her plans include increasing the number of honking car horns and making the commute to the airport considerably less convenient.)

Besides Barr, the eclectic guest cast includes Rose Byrne, Jim Gaffigan, Juliette Lewis, No Doubt, Bill Hader and Martina Navratilova. (Not in the same episode; though I wouldn’t put it past this show.) Special Features on this DVD set include two deleted scenes and “Portland Tours”, featuring Nanjiani taking us through some of the locations and meeting with a few of the characters that inspired several skits. The tours make the city seem completely inviting, and — thanks to IFC’s decision to renew the show for a fourth and fifth season — I’m already looking forward to my return trip to Portlandia.