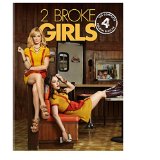 Everyone on TV has nicer clothes and a bigger home than you do. And I’m not just talking about fictional doctors or lawyers. Even small-screen characters with relatively modest incomes manage to live in palatial apartments. Need proof? The 2 Broke Girls in CBS’s hit sitcom have an apartment that is literally big enough to fit a horse. (Hi, Chestnut.) Season 4 even manages to squeeze in a gaggle of Victoria’s Secret models (Ep. 6/“And the Model Apartment”), and the girls’ building gets a new tenant when lewd line cook Oleg (Jonathan Kite) moves in with larger-than-life upstairs neighbor Sophie (Jennifer Coolidge), leading to the one-liner “the booty call is coming from inside the house.”

“You two are a combination of sugar and spice…and things not so nice.”

In case you don’t know by now, the Girls are Max Black (Kat Dennings) and Caroline Channing (Beth Behrs), who are best friends despite the fact that they appear to be polar opposites. Caroline — the disgraced daughter of a jailed Ponzi schemer — is blonde, skinny and chipper. Max — the street smart survivor who seems to have a million jokes about her deadbeat mom and hard-luck childhood — is dark haired, busty and sour. The two are surrounded by their wacky, warped surrogate family at the Williamsburg Diner in Brooklyn.

In addition to Oleg and Sophie (who is also a diner regular), there’s diminutive diner owner Han (Matthew Moy), who continues to be the never-ending butt of jokes about his (lack of) height and masculinity, and paternal cashier/lovable ex-drug addict Earl (Garrett Morris), who is gradually going blind. Before you feel too bad for Earl, you should know the stakes on this bawdy, breezy sitcom remain comically low. For example, the most traumatic thing that happens to the Girls this season probably occurs when Caroline is forced to cut her hair after getting it stuck in her Murphy bed. (The solution, naturally, involves cinnamon-flavored lube makeup remover.) Even then, the result is that Behrs gets to unveil a chic, shorter cut.

Season 4 finds the girls still struggling to get their cupcake business off the ground, even after getting a social media boost from guest star Kim Kardashian (Ep. 1/“And the Reality Problem”). But it’s not just Max and Caroline who have stumbled onto hard times. When they realize some of their local competition has closed down, the girls find other ways to generate income. (Insert about a few dozen Max/Oleg zingers about what the girls could do to, ahem, generate income.) Max comes up with a T-shirt design that becomes trendy and a viable side business for a while thanks to Caroline’s relentless hustle. The girls also end up working at a fashionable pastry shop called The High under a demanding, lesbian owner named Joe (Sandra Berndhard). I only mention that she’s a lesbian because, in typical 2 Broke Girls fashion, it’s one of the two traits that serves as the source for the character’s comedy.

The show is largely populated by one-liners that are either groan-inducing (“Always knew we’d dye together” as Max and Caroline go undercover in a dyeing plant), centered around sex (“I feel like a bull in a vagina shop”), or both. Creators Michael Patrick King and Whitney Cummings also continue to take merciless aim at self-involved hipsters and trends like Airbnb and vaping. Many of the jokes are as stale as the food in the Williamsburg Diner, but the cast delivers them with familiar gusto.

Dennings gets most of the best one-liners, which she alternately fires off with sarcastic, sadistic glee and intense disinterest. You might have to squint to see “growth” in any of these characters — except for Han, who stopped growing at age 8 — but we see Max slowly overcoming her insecurities about having good things happen to her when the T-shirt idea (temporarily) takes off. Behrs has the more thankless part, as Caroline endures an endless string of indignities. Season 4 has seems to particularly have it in for Caroline as the character endures an endless string of jokes about her lack of bust, how little sex she has, how bad she is at sex when she does have it, and how annoying and self-involved she is. But the actress soldiers on with impressive aplomb. The easy chemistry between Dennings and Behrs remains terrific.

It’s a tight race between Behrs and Moy in terms of who is the most popular comedic target on this show, but even Han seems to be fighting back more frequently in season 4 with jokes about how Max and Caroline are terrible, lazy employees. Coolidge continues to be a valuable scene-stealer; she’s the one performer who totally embodies (and owns) the show’s loudness and crassness. She and Kite have what comes closest to an arc on this show as Sophie and Oleg get engaged and go through a lot of speed bumps on their way to their wacky, Polish season finale wedding (“And the Disappointing Unit”).

2 Broke Girls: The Complete Fourth Season features all 22 episodes on three discs. The special features, unaired scenes and a gag reel, can be found on Disc 3. The finale also sees Max and Caroline treat themselves with a trip to Paris. (No wonder the episode-by-episode counter that updates us on their finances actually dipped into the negatives a few times this season). The show has been renewed for a fifth season, so I wouldn’t be surprised to see the new campaign kick off with the girls in Europe. (My head is spinning with all the easy jokes Max could make at the expense of the French.) As always, if you’re interested in this show, you can either pick up this set or start watching the new season when it premieres this fall. For better and worse, 2 Broke Girls is not terribly complicated. But every time I sit down to watch a new season, the same though occurs to me. “I can’t believe I’m saying this, but I miss this place.”

The Dovekeepers (Blu-ray) The Killing: The Complete Fourth Season