Posted in: Disc Reviews by John Delia on February 9th, 2017 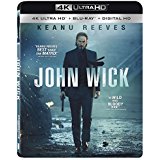 Taking a shot as a hitman in his latest film John Wick, Keanu Reeves delivers his character with authority in this explosive crime drama.  The film turns out to be an ideal fit for the star and his former stunt double turned director as they move to one perfectly choreographed fight scene after another. It’s a fast-action gauntlet that lasts nearly the whole 96 minutes.

Retired killer for the mob John Wick (Reeves), also known in gang circles as the Boogeyman, has just lost his wife after a long illness.  A day following the funeral he receives a beagle puppy delivered by a service to his home.  It’s from his deceased wife who sent the pet to give him comfort after her death. The next morning he pulls into a local gas station where he’s approached by a young Russian gangster Iosef Tarasov (Alfie Allen), who offers to buy his classic Mustang.  Refusing, Wick starts to leave, but Iosef tells him he really wants his car.  Ignoring him, he drives off and returns to his home.

That night Iosef invades Wick’s house with several of his henchmen, killing the dog in the process. Wick kills almost all of the home invaders, but Iosef escapes with the Mustang.  Soon after Wick gets a call from Russian mob boss Viggo Tarasov (Michael Nyqvist) who tries to placate him with money for his son’s behavior.  Wick refuses the powerful man, wanting his son’s life for the death of his dog.  When Viggo rebuffs Wick, a war begins with the Boogeyman going on a rampage far greater than the mob boss could ever imagine.

Former Stuntman Chad Stahelski, who doubled for Reeves in The Matrix, puts on his directorial hat, creating this awesome nonstop crime action film.  Knowing just how the stunt process works to make a film look realistic and action-packed, Stahelski winds his way through the script choreographing shootouts, fistfights, and martial arts battles.  Keanu Reeves does almost all of his stunts in the film, showing that he’s still on top of his game.

Reeves gives his all as Wick, overshadowing the ferocity of his fight-acting ability in any previous film.  He mirrors many of the mixed martial arts actors who are a large part of the cast that go up against John Wick.  Most adrenaline-boost seekers will get a charge out of Reeves’s vengeance with realistic pinpoint roundhouse kicks, swift damaging punches, and brutal karate attacks.  He’s swift and lethal with a handgun, shotgun, and knife.  And something I’ve not seen much of in movies: he reloads his weapon on the run after maximum delivered gunshots.

Incredible cinematography with seamless panning from one fight to the next, the camera shoot during many sequences throughout the film is remarkably continual. Moving in for close-ups of the action and then pulling back to show the whole picture during long sequences, the ‘one-shots’ are very cool. One battle takes a lot of screen time, but not once could I distinguish the same character being killed. In all there’s 84 kills by the lead character. The movie John Wick must surely now hold the record for the number of kills by one character in a crime film. The most creative kill comes midway through the film…um, sorry can’t give that away, but it’s a wicked hit.

John Wick is presented in its original aspect ratio of 2.40:1. The Ultra-high-definition  image is arrived at by an HEVC codec with an average bitrate of 70 mbps. It’s a good thing that the people who worked on this transfer didn’t succumb to the oversaturation temptation. The movie relies quite heavily on a very desaturated image presentation that is almost monochromatic at times. It’s only in the few flashback scenes that the color becomes quite warm. It’s all part of a carefully-crafted style that works well for this material. When there are splashes of color, they are dynamic and allow for some nice stark contrast. You get plenty of detail and a sharpness that rivals anything else I’ve seen to date in the UHD format. Motion is quite good. Black levels are a bit murky, but again, that’s part of the film’s unique style.

The Dolby Atmos presentation defaults to a solid 7.1. There’s a lot of action and violence here, and the audio presentation sucks you completely into these atmospheric environments. The surrounds are usually quite aggressive, and the action will truly surround you. The score goes from subtle to biting and never steps on the action or dialog. The subs are what really perform here. A good system will shake, rattle, and roll just as was intended.

There is an Audio Commentary with directors Chad Stahelski and David Leitch.

The extras are on both the UHD and HD Blu-ray copies of the film.

Don’t F*#% With John Wick: (15:17) Of course, there must be a big behind-the-scenes look at the action and stunts here. They are larger than life. Cast and crew take you through the training that Reeves went through to prepare for the stunts. We get a good look at the choreography and plenty of the heart-pumping clips.

Calling In The Cavalry: (11:58) This feature looks at the material from the point of view of the first-time directors.

Destiny Of A Collective: (6:19) This feature is a profile of 8711, the stunt team company that worked on the film.

Assassin’s Code: (5:18) This feature looks at the style and atmosphere of the underworld that Wick travels in during the film. Cast and crew offer their takes on the various ways that look was attained.

NYC Noir: (6:00) Another feature on style looks at the locations used to present this unique take on New York City.

The only downside I could see is the many similar films that have come out over the years.  If you have watched the relentless-kill films such as The Raid: Redemption (all-time most crime carnage), Taken (plus several other films with Liam Neeson) , Contraband (many others starring Mark Wahlberg), 2 Guns (most of Denzel Washington’s movies), Fast 5 (a lot of movies with Vin Diesel), Jack Reacher (most anything with Tom Cruise), Transporter (anything that has Jason Statham), etc. you may get a sense of deja vu, but go see this one anyway; it’s worth the price of admission.

John Delia has been on all sides of the movie business from publicity, writing for publications and on line blogs, script writing, to film making. Writer, critic, film editor he has worked as a film critic on this second go around for 14 years. He earned his Bachelor’s degree at the college of Journalism and Communications at the University of Florida in Gainesville, Florida. John is an active member of the Southeastern Film Critics Association (SEFCA) . Favorite Films: Lord of the Rings/Hobbit trilogies, The Godfather trilogy, the Indiana Jones trilogy (I didn't like the 4th), The Avengers and for TV it's Game of Thrones. As for animation it's a tie between anything Pixar and everything Hayao Miyazaki.
Frankenstein: The Real Story/The Real Wolfman From Dusk Till Dawn: Season 3