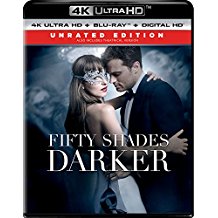 From the suggestion of the title, you would think that we would be diving deeper into the world of BDSM, but after watching, the only thing that I can say about Fifty Shades Darker is that it’s a love story. Yes, I know that it was always a love story, but the first film possessed an edge and intensity which no longer exist in the sequel. Disappointing is too pale a word for the film. From its failure to properly capture the essence of the source material, less than engaging performance of the leads, and the vanilla nature of the sex scenes, the movie does not live up to the hype. If 50 Shades of Grey pushed the envelope with its sexuality, 50 Shades Darker embraces the commercialism of a sequel for profit rather than effect.

When last we saw Christian Grey (Jaime Dornan) and Anastasia Steele (Dakota Johnson) they had just learned that Ana may not be compatible for the kind of relationship that Christian needs, and they broke up. Their separation is temporary as both parties notice the absence of the other quickly, resulting in Christian seeking Ana out and attempting to renegotiate the terms of their relationship. Ana is all but willing to reconcile, but as soon as it seems that they are about to embrace their happily ever after, complications in the form of an ex-sub Leila and the reemergence of Christian’s original temptress, Elena Lincoln (Kim Basinger) threaten to tear the couple apart.

That is just one example of where slight tweaks might have improved the overall quality of the film. Another issue is the storyline, which I found to be rushed and without structure. It felt like the story was just going through the motions, following the script of the book in not the most effective way and glossing over areas where more time should have been spent, such as Leila. Not to keep comparing it to the book, but the search to find and help Leila is a big portion of the story, adding necessary complication to the love story. They started out nicely with her addition; she was just this girl in the shadows who appeared in the most random and unexpected areas, which built a decent level of intrigue, at least that’s how it was for me. Then towards the midpoint she was relegated to the background to make way for the love story. In fact, many aspects become relegated with the focal point of the dynamic of the leads. The film basically turned into a romantic comedy with nudity.

There was no real conflict or struggle between Johnson and Dornan where there were situations that should have sparked confrontations, such as the reemergence of Elena Lincoln (Kim Basinger) aka Miss Robinson.  Honestly, that whole situation was bungled. Johnson never conveyed the right level of outrage at Basinger’s presence in my opinion.  There needed to be more venom spitting on both ends. The love triangle just felt incomplete and unfinished, like a vital part of it was left untold. Dornan’s approach to everything was also extremely tame in comparison with his literary counterpart. He was basically a yes man, succumbing and bowing down (one time literally) in every situation. There needed to be more inner turmoil as he struggled to overcome the demons of his past and evolve. His only true sign of depth came from the scene involving lipstick and was missing during another vital interaction; fans of the book will know which scenes I’m referring to.

50 Shades Darker is presented in its original aspect ratio of 2.40:1. The Ultra-high-definition  image is arrived at by an HEVC codec with an average bit rate of only between 40-50 mbps. In spite of the relatively modest bit rate, the image manages to look quite sharp and rather atmospheric. The colors and focus remain soft. We’re not talking a blurry soft but more of an intimate soft that plays well with the material. There are moments that contrast sharply with that standard. The Ball exhibits a wide range of colors that pop on the costumes and masks. Deep blues are particularly nice here. Reds also pop at the appropriate moments. Black levels aren’t inky black, but you will get some nice shadow detail.

The DTS:X presentation defaults to a 7.1 track. Again the key word here is intimate. The sound always feels close with little aggressive ear candy to distract from the material. Dialog comes through with nice deep tones. The score does a pretty good job of adding to the atmosphere. Subs give you just a hint of bass to give everything a full sound.

You have the option of the theatrical version or an unrated version that’s about 15 minutes longer. It’s not really that much steamier, but the sexual encounters likely make up for most of the new material.

Deleted Scenes: (1:53) There are only two with a play-all option.

Writing Darker: (3:16) The writer tells us this was originally written as Twilight fan fiction. She gives us a bit about working with the cast and crew of the films.

A Darker Direction: (4:42) A profile of director James Foley, who took over the director’s chair for the second film.

A Dark Reunion: (7:58) This feature focuses on the cast and characters.

New Threats: (8:54) This feature looks at the three characters who provide the “villainy” for this film.

The Masquerade: (6:35) A look at the sets and production design of the Ball sequence. Of course, there’s a lot about costume design here.

There is also a 30 second teaser for the third film.

50 Shades Darker never finds the rhythm that was needed to draw me in and get me invested in the story. Also from a guy’s perspective, the biggest draw (the sex) is not up to par with what my imagination conjured up.

Jeremy Butler is a film school graduate of the International Academy of Design and Technology. He is been writing for Upcomingdiscs since 2012; however, movies have played a big part of his life for much longer. Favorite genres include horror, science fiction/fantasy, and comedy. Favorite movies are V for Vendetta, Boondocks Saints, Kiss Kiss Bang Bang, and The Godfather.
The Godfather & The Godfather Part II: 45th Anniversary (Blu-ray) The Expendables 2 (UHD Blu-ray) (4K)