Posted in: Disc Reviews by Archive Authors on October 17th, 2002

Band of Brothers, as should be expected from multiple emmy award winner, is an amazing miniseries. Steven Spielberg and Tom Hanks have collaborated on creating a memorable and poignant story that can be appreciate by all.

”Based on Stephen E. Ambrose’s nonfiction bestseller, BAND OF BROTHERS tells the story of Easy Company, 506th Regiment of the 101st Airborne Division, U.S. Army. Starting with their rigorous training in Georgia in 1942, it recounts the achievements of the elite rifle company fr…m D-Day to the fall of Nazi Germany and the surrender of Japan. Drawn from hours of interviews with survivors, as well as soldiers’ journals and letters, BAND OF BROTHERS chronicles a unit that took 150 percent casualties and whose lives became legend.” – HBO

Both the DTS and Dolby Digital 5.1 audio tracks are very front heavy on this set. The DTS track does have a little more life, but both tracks are still very good. The surrounds are used nicely to position effects, but are not overly active throughout the mix. The dialog is strong and clear, and the bass is adequate.

HBO has come through with another stellar video transfer. The 1.66:1 anamorphic widescreen transfer is free from most defects, and looks very sharp. The miniseries is devoid of most color, but the dusty look and feel of the show is maintained nicely. There are a few glimpses of good color, but this is rare due to the content, and the darks are extremely deep and clear.

The special features on this set shine. Located on each of the first five discs is an interactive field guide. This is a tool that helps you better understand the series, as well as better understand the military. You can view cast/character information, military rankings, field maps of where the troops have traveled, and more. There are also test introductions to each episode.

It is on disc six where the real goods are located. First up is a very interesting documentary, entitled We Stand Alone Together: The Men of Easy Company, that encompasses a medley of interviews with the surviving members of Easy Company, 506th Regiment of the 101st Airborne Division. This documentary spans 78 minutes, and includes original photographs from the regiment in 1942. These men tell the real story told in this great miniseries.

Next up is my favorite extra of them all… Ron Livingston’s Video Diaries. This is a compellation of 12 videos shot by Ron Livingston (Captain Lewis Nixon) over the span of the shooting of Band of Brothers. This is a wonderful behind-the-scenes look of how the a film/series is created… all through the eyes of one of the characters. You can watch each of the video’s separately, or watch them all strung together (using the “play all” button). I have seen many special features over the past few years… and I must say that this is one of my favorites.

This disc also includes a “Making of Band of Brothers” featurette. This feature, mainly through interviews, covers topics such as locations, sets, characters, and the story. Lastly, this set contains a photo gallery, a “Jeep” promotional spot, and DVD-ROM features.

This is one wonderful HBO offering. Band of Brothers is one of the best miniseries ever made (in my opinion), and should really be seen by all. This set is equally wonderful. The audio and video are of high quality, and the extras are extremely valuable. Oh yeah… how can I forget the great packaging… the metal tin is as cool as they come! 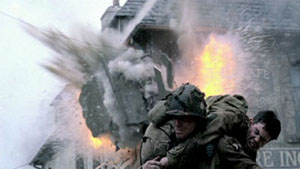 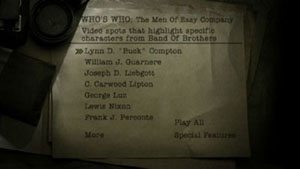 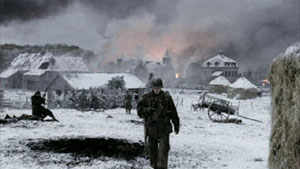