Posted in: Disc Reviews by Archive Authors on November 10th, 2003

X2:X Men United is the follow-up film to the original X-men film from 2000. The original film did a good job of setting up the universe of the X-men and introducing us to the core characters that the comic books have always centered around. This film expands on this universe and brings along some of the coolest characters from the comics, this being Pyro, a brief glimpse of Juggernaut and lets not forget Nightcrawler. In this film we see the good and band mutants joining forces to defeat a common enemy. This is a little disappointing as we get to see cool new good characters but not really any super new baddies, but it also keeps the storyline fresh instead of it just being the good mutants versus the bad mutants.

Things get rolling with an attack on the President of the United States by Nightcrawler, this is a very cool scene involving some of the best CGI I have seen since Gollum from the Lord of the Rings trilogy, watching Nightcrawler “bamf” around the room is jaw droppingly slick. The only real issue with this scene and possibly the whole movie is that you can’t figure out how Nightcrawler can attack the President and still be a good guy, it is briefly eluded to that he is under some kind of mind control drug but this is very easy to miss. Next we find an imprisoned Magneto, Wolverine discovering a part of his past by visiting an old army base and then returning to the Xavier school and a plot being devised to raid the school by William Striker. Striker ends up with the a handful of the school kids as well as Xavier and Cyclops (oh yeah, my other complaint with this film is that there really is no reason for Cyclops to exist other then the love triangle with Jean Gray and Wolverine and the acting by James Marsden is laughable), Magneto breaks out of prison and joins forces with the X Men to rescue Xavier as Stryker is using him to try and kill all the mutants in the world. If this sounds like a lot it is, there are so many subplots and side stories going on that sometimes it is hard to keep track of everything. Lets just say that there aren’t really any pacing problems with the film as it moves along at a very engaging pace.

The bottom line on the story is that the first film was really a big set-up for this film and it delivers. The action is non-stop the effects are awesome looking and the new characters are very cool. It also does a very good job of setting up a third film as the last scene is basically a teaser trailer for X3.

Both of the releases of the last X-men film where very good looking and this one is no different. The 2.40:1 transfer is free of any film debris or grit and is razor sharp. Balck levels are deep and dark with good detail. This film is a little brighter looking then the first film that had a much darker tone and look. Colors really pop off the screen and are never over saturated adding a detail of near three dimensionality to the image. Bravo to Fox for a flawless transfer.

The opening White House attack scene does a great job of setting up the audio quality for the disc. As Nightcrawler “bamfs” around the room it sounds amazing the front stage extends far past the speakers add in the rears and we have a seamless 360 degree soundscape. Both the Dolby Digital and DTS 5.1 audio tracks blend the effects and voices with a grand orchestral score. During the climatic scene in the dam when the dam starts to break your subwoofer will start rattling the fillings from your teeth, bass is powerful and extends down to the bone rattling depths. This disc sounds as good as it looks and both audio tracks sound great with the DTS track adding a touch more spatiality to the overall feel.

As for special features you get your moneys with this two disc set. The first disc contains the film and two full length audio commentaries. The first with the director Bryan Singer and cinematographer Newton Thomas Siegel, the second commentary

is with the writers and producers. The first commentary is very good and adds a lot to the film, the second one I found to be overly busty with just two many different voice spiled on each other.

Disc 2 contains a huge amount of special features and looks at every aspect of the film making process. We start things off with The History of the X-men this is a two segment piece the first entitled The Secret Origins of the X-men and is an interview with Stan Lee and the current writer for the x-men comic series. The other half is The origins of Nightcrawler and looks at the progression of the Nightcrawler character throughout the comic series, it also contains a quirky fact about him that you would probably be better off not knowing.

The next section is the Pre-production section and is broken down into three parts. The first of these is a Multi-angle look at the Nightcawler White House attack, angle one looks at the animatic mock-up of the scene, angle two is the scene without the finished effects and angles three and four compare the first two angles to the finished product. Part two is the Evolution in the Details where we get to go on a tour of the a number of the sets and locations used throughout the film, this is pretty cool but you quickly realize why this guy works behind the camera and not in front of it. Lastly we look at Costume Design and we look at the costumes for the new characters as well as the evolution of the costumes form the last film.

The next section we move into is of course the Production and this is broken down in to six different sections. We first get to look at the rehearsals for the Wolverine and Lady Deathstrike fight Scene. Next we have a 58 minute featurette for The Making of X2 this features cast and crew footage and is very good. Next we move into three sections looking at Nightcrawler, we first look at the movement and make-up process and next move onto the Nightcrawler stunt rehearsal for the White House Attack which is a mix of animatric and live action that shows just how much work and planning goes into these stunts. Lastly for Nightcrawler we have a time lapse video sequence the goes through the extensive Make-up application process (this left me wondering why a version of this was included for the Mystique character…..). The last part of the production section looks at Visual Effects, first we have a featurette with the effects supervisor wher we learn that the film has over 800 effects shots (WOW). Next we get an inside look at how the Tornadoes where created for the X jet Sequence, this makes the process look much simpler then it really is. We also look at Nightcrawler’s teleports (bamf’s), Magneto’s Plastic Prison, Cerebro and the process surrounding The Dam destruction for the films climax.

To round things out for the production process we lastly explore the Post-production process first surrounding the score in Requiem for Mutants. The film has a very unique and orchestral score that is rare in films as of late. Lastly we look at X2 Global Webcast Highlights as we watch different people involved in he film answer questions from the webcast launch party for the film.

So what else could be left for specials features you ask yourself, well how does 11 deleted scenes and three Galleries sound? The galleries cover the characters, locations and sets and also includes a collection of mutant x-rays.

All of the menus on the discs are scored and animated as are the menu transitions. My only complaint with the menus is that the can be a little tough to navigate and I could not find any easter eggs. The special features for the disc are awesome and only probably bettered by the expansive extras included with the Lord of the Rings Extended Edition disc sets.

This film is a vast improvement on the first, the disc looks and sounds great and is LOADED with excellent quality extras. Don’t by this disc because it is a great comic book film buy it because it is an awesome action film loaded with awesome extras. A must own! 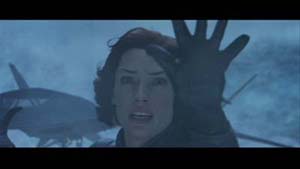 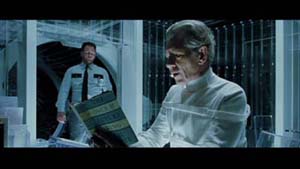 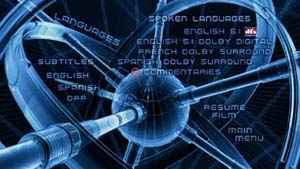 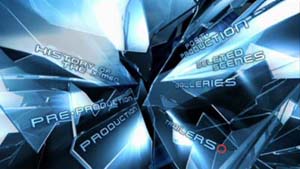