Posted in: Disc Reviews by Archive Authors on November 26th, 2006 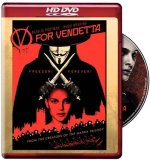 Natalie Portman stars in V for Vendetta, cast in a role unlike what I typically expect from her, a dialogue driven action movie with a serious tone to it. This movie even got me thinking a little bit about mankind’s intolerance of other man and how far society has to go to protect itself. I enjoy movies of this nature, you know the kind taking place in a not to distance future and not so distant problems, but a drastically different way of life. Something these movies always have in common is the civil rights …hat are stripped from society for “beneficiary” reasons and leadership is in the form of a dictatorship. Basically, mankind takes a step back and a docile society is brought forward. Curfew and the inability to freely express oneself via certain forms of art and music plague a futuristic England. The real question here being, would you rather live in a world with few forms of expression and the inability to be a non-conformist but with crime almost non-existent? Comparable to the movie Equilibrium before it, the people in this future must sacrifice these certain rights in order to live in a “safe” environment.

The movie also has obvious Nazi undertones; the most obvious would be the rise and rule of Chancellor Adam Sutler, which shares similar traits and action of Adolph Hitler. The way the speeches are conducted, and the way the personal army of the Chancellor have rule of the streets all seem to remind me of the Nazi regime. I believe this element of the film makes it much more real to the viewer, seeing as fear tactics have and still are being used by government officials today.

The movie begins with Evey Hammond (Natalie Portman) leaving her apartment past curfew to visit a friend. While on her way there she is stopped by the Chancellors personal police who question her for being out when she shouldn’t. It is evident that these unfriendly officers are about to rape Evey when along comes V (Hugo Weaving) to save the day. From here we find out that he is not some vigilante out to protect people, but rather a freedom fighter bent on returning society to how it once was. V broadcasts a video of himself promising to bring down the dictatorship in one year, on November 5th and encourages members of society to stand behind his cause. The smooth talking V is a cunning linguist and an educated man who is obliviously anti-establishment, and for appropriate reasons. From this point there is always something new happening, and something from the past brought forward. We learn of the characters troubled pasts and their hopes for a different future. As well as the movie plays out we learn of how and why things are the way they are, and how bad this dictatorship can really be.

The way the movie shows the corruption in government and the media outlets it controls, as well as the people it does was very interesting. The deception to it’s citizens to keep it “safe” whilst profiting from fear makes you wonder if our governments are doing the same things. This movie goes beyond senseless action, and puts some serious thought into what society is to become.

Hugo Weaving as V is nothing short of superb; I could not imagine anyone else playing him. The way he portrays V really makes you feel for the character, which is somewhat of an anti-hero. Other actors such as Natalie Portman and John Hurt also give very good realistic performances, which is refreshing to see in this genre.

I was skeptical when I first saw a preview for V, as it did not catch my attention in any way. I thought it would be a more comic book type, hack and slash action movie, but having now seen it on HD DVD I can say my preconceived notions were wrong. V for Vendetta offers something many action movies lack now a days, a decent plot. Take that and mix it terrific acting and stylistic action scenes, and you got yourself a solid action movie.

V for Vendetta is presented in 1080p 2.40:1 aspect ratio and shows the true quality of HD DVD. Right from the start I was pleased to see the deep blacks and vibrant colors I’ve come to expect from HD DVD. The film taking place in the not to distant future looked visually pleasing in the theatre and looks even more so now.

Facial detail was shown in extreme detail, showing every wrinkle of the hardened citizens, rarely showing any softness in picture. I did notice some grain during some landscape shots taken at night; these don’t appear often and don’t last a long time but it something the viewer will notice.

Overall I was very pleased with the picture quality of this film. Although not as consistent as Warners other flagship title, Batman Begins, V for Vendetta offers top tier picture quality no HD DVD owner should pass up.

Presented on Dolby 5.1 TrueHD, I was excited to see Warner include a TrueHD track with this picture and as expected it does not disappoint.

V for Vendetta is driven heavily by dialogue and isn’t an all out shooting explosion driven action movie. Having said that the movie still has a fair share of action scenes and these utilize the HD track very well. Bass sounded deep, while front channels released crystal clear sound putting you inside the action. The balance between front and rear channels also is done great giving the viewer a true surround sound experience.

I found this the best TrueHD track I’ve heard on HD DVD, surpassing Batman Begins. V for Vendetta uses TrueHD to its maximum potential. Explosions sounded crisp and loud, gun shots gave a realistic boom and all these added details in sound really do immerse you in the film.

Warner was gracious enough to include the much loved In Movie Experience (IME) with V for Vendetta. Personally I think IME is a great and groundbreaking feature, making viewing the disc a second time while listening to a commentary track much more involving. During this feature we are led by director James McTeigue as he takes us through the production of V. We also get to see Hugo Weaving, Natalie Portman throughout the film discuss key scenes.

Along with IME, Warner decided to include a fare share of extras…

Although some features on this disc are lacking, there are enough interesting ones to ignore that, mix that in with IME and we have a strong set of extra features.

I really enjoyed V for Vendetta, the movie featured both great acting and a suspenseful plot. I would recommend this movie to a more mature audience as there is a lot of dialogue and concepts that make you think about our actions as human beings. This of course is not to say that anyone else won’t enjoy this movie, because they will. Warner presented this disc very well, with clear visuals and a superb audio track. On HD DVD Vendetta is a great disc, a must own for any action fan.