Posted in: Disc Reviews by Gino Sassani on August 7th, 2009

“Now this might be the room of any small boy, but it happens to belong to a boy named Christopher Robin, and like most small boys, Christopher Robin had toy animals to play with. And together they had many remarkable adventures in an enchanted place called The Hundred Acre Wood. But out of all of his animal friends, Christopher Robin’s very best friend was a bear called Winnie The Pooh.”

“Oh Bother”A.A. Milne was quite an eclectic writer. He wrote murder mysteries that even appeared on Alfred Hitchcock Presents. From that fertile mind would also come a place known as the Hundred Acre Wood. In that select place some of literature’s finest characters had the greatest adventures any boy could imagine. And adventures are certainly no fun on your own. Young Christopher Robin was joined by Piglet, Tigger, Owl, Rabbit, Eeyore, and, of course, Winnie-The-Pooh. Who didn’t fall in love with that silly old bear… Winnie-The-Pooh. OK, so maybe Dahmer or Bundy might have been exceptions. Still, anyone growing up in the last 30-40 years who isn’t a psychopath has had a love affair with Winnie-The-Pooh, all stuffed with fluff.

Often when a company gets the rights to such classic characters they end up doing more harm than good, particularly if they include some quite radical changes to the beloved material. Walt Disney was first introduced to the stories after seeing his own children delighted by their adventures. His quick mind told him that this English story needed to be more formally introduced to American children. It took several years for the versions of these characters to evolve into what we so instantly recognize today. The original characters were quite different from these uniquely Disney inventions. I know the folks at Disney claim they stayed very true to the originals, but that simply isn’t true. Today the characters are recognized all over the world more in their Disney incarnations. More than the drawings, the voices of these characters have become very distinctive with those of us who grew up with them.

“Winnie The Pooh? Now wait just a darned minute. It seems to me that most of these stories are about that silly old bear. I happen to know someone who’s extremely fascinatin’, not to mention handsome and debonary.”

I guess of all of the residents of The Hundred Acre Wood I identified most with Tigger. He was certainly the boisterous showman in the group. He was loud, and playful and full of boundless energy. He had a bit of an ego problem as well, you don’t say. And while his heart was always in the right place, Tigger managed to find more trouble than the other friends did. Finally, he was rather unique and awfully proud of it. Yes, it certainly sounded like a young boy I once knew. I understand he grew up to be a musician and writer. Wouldn’t you know it. So, you can imagine how pleased I was in 2000 when Tigger got his very own movie.

Tigger (Cummings) is not his usual cheerful and bouncy self of late. It seems it’s getting harder and harder for him to find someone to bounce with. It doesn’t help that his bounces tend to end badly for his friends. With the exception of loyal Roo (Hopkins), Tigger doesn’t have anyone to play with. Lately being the only one isn’t feeling so wonderful anymore.

Tigger tries to cheer himself up by teaching young Roo the Whoop-de-dooper, Loop-de-looper, Ali-ooper Bounce. It’s the hardest, bestest, bounce that only the bestest bouncers can bounce, strictly for your professional bouncers, to be sure. Half the bounce is 90% mental. Roo’s a natural however, and catches on fast. Unfortunately, it’s not enough to cheer up Tigger. Roo decides that Tigger should write a letter to any family that might be out there and invite them over to his house. Tigger does just that, but no one answers and he falls deeper into his sad state. So, Tigger’s friends decide to answer the letter and pretend it came from Tigger’s real family. It works. Tigger is very happy and excited, but now he expects all of his newfound relatives to come for a visit. The gang knows there are no Tiggers coming, so they dress up as Tiggers and try to fool their friend into being happy. Again the plan backfires and only serves to drive Tigger out into the terrible wintry storm to find his family tree. Now if only they can convince Rabbit (Sansom) to lead the “expotition” to bring back Tigger safe and sound. Together the gang learns a lesson about family and friendship, as well as the power of the Whoop-de-dooper, Loop-de-looper, Ali-ooper Bounce.

The Tigger Movie was a bit of a change for the Walt Disney Studios and for the denizens of The Hundred Acre Wood. None of this film was done by the Disney animation team; in fact most of that team has been disbanded to make room for more modern modes of animation. The thought made me cringe a bit. All of the film was farmed out to various animation houses from all over the world. Examine the credits and you’ll discover that a great deal of it was created in Japan. But, thankfully, you wouldn’t know it to look at the film. From the storybook design and style to the wonderfully fluid animation of the characters placed in those iconic backgrounds, the film is a nearly perfect match to The Many Adventures Of Winnie The Pooh from 40 years previous. I was delighted and amazed at how carefully the work did more than pay homage to the source material. They copied it almost exactly. When you watch The Tigger Movie it will be very easy for you to imagine you’re back in the 1960’s and watching some lost treasure from the inks and pens of the incredible groundbreaking Disney stable of animators. Treasure it. Savor it, because this film pretty much marks the last time The Hundred Acre Wood would look this way again.

The only returning voice from the first days of Pooh is John Fiedler as Piglet. While Sterling Holloway was the original voice of Pooh and Paul Winchell was Tigger, Jim Cummings has been doing both voices for long enough that they sound very authentic here. The rest of the cast is reasonable enough. The Sherman Brothers returned to provide the original songs, again for the last time in a Disney film. Even Kenny Loggins provides a tender end credit song. While he was not at all involved in the original works, he is, of course, remembered for the hit song, House On Pooh Corner, performed as part of the duo Loggins and Messina. The latest Pooh films have been almost unrecognizable. Hang on to this one for one last truly magical visit to The Hundred Acre Wood.

Each episode is presented in its original 1.66:1 enhanced for 16×9 television aspect ratio. You’ll be pretty amazed at the video presentation here. Even in the age of high definition this standard DVD looks impressive. Colors are bright and alive with all of the major characters displaying spot on the way we remembered them. There is a moment about 15 minutes into the film where Tigger is standing in beams of sunlight that have broken through the forest canopy. It’s simply a wonderful image alive with almost a spirit behind it. The animation is smooth. Black levels are near perfect, as is contrast. I don’t have the original release any longer so I’m not sure it’s an upgrade, but it’s a very fine visual presentation indeed.

The Dolby Digital 5.1 track offers pretty much dialog and music or effects. It’s fine for what it is. There are a few songs, and they have nice dynamic range, but this isn’t the kind of film that lives too widely in the surrounds. Dialog is excellent, allowing you to hear it all perfectly.

Most of the extras are a collection of kiddie games and some music. Then there’s 2 episodes of the Saturday Morning cartoon The New Adventures Of Winnie The Pooh: King Of The Beasties and Tigger’s House Guest. Plus a Digital Copy.

I’ve been enchanted by these characters since I was a young boy and the first Disney film was released. It’s nice to see those memories honored here, albeit for the last time. It’s a film that will appeal to all ages and span generations. You’ll be able to share these memories with your own kids, who will hopefully carry them on again someday. “T T F N, Ta-ta For Now”. 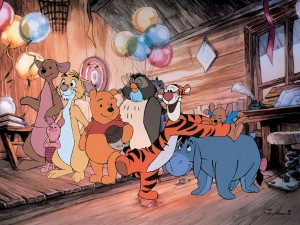 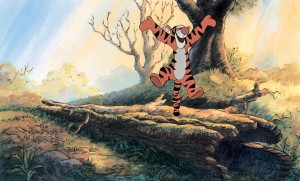 Gino Sassani is a member of the Southeastern Film Critic's Association (SEFCA). He is a film and television critic based in Tampa, Florida. He's also the Senior Editor here at Upcomingdiscs. Gino started reviewing films in the early 1990's as a segment of his local television show Focus. He's an award-winning recording artist for Omega Records. Gino is currently working on his 8th album Merchants & Mercenaries. Gino took over Upcomingdiscs Dec 1, 2008. He works out of a home theater he calls The Reel World. Favorite films: The Godfather, The Godfather Part II, The Body Snatcher (Val Lewton film with Karloff and Lugosi, not the pod people film), Unforgiven, Gladiator, The Lion King, Jaws, Son Of Frankenstein, The Good, The Bad And The Ugly, and Monsters, Inc.
Dragonball: Evolution (Blu-ray) Explicit Ills