Posted in: Disc Reviews by Michael Durr on January 20th, 2010

As a kid, I was subjected to all sorts of soap operas whether it be during the day or during the night. During the day, it was a steady stream of Young & The Restless or General Hospital. At night, it was two shows as well. The first was Dynasty, which could better be described as a Joan Collins vs Linda Evans wrestling match. Then there was Dallas: J.R. & Bobby at the forefront of oil, cattle, deceit, and general debauchery. How sweet it is.

The twelfth season of Dallas starts with the eleventh season cliffhanger. J.R. Ewing (played by Larry Hagman and Nicholas Pierce (played by Jack Scalia) get into a fight in J.R.’s penthouse. Nicholas Pierce happens to be Sue Ellen’s (played by Linda Gray) new boyfriend. Except that she is still married to J.R. Anyhow, in the struggle Nicholas goes over the balcony rail and falls to his death. Sue Ellen then picks up a gun and shoots J.R. several times before phoning the police to call in a double murder.

J.R. is rushed to the hospital and Sue Ellen is left to contend with the police. As it turns out, J.R. is the luckiest man alive as the shots miss anything vital and he should be ready to leave the hospital within days. However, he plays up the fact that he is hurt to see if any of the Ewings feel sorry for him and visit the hospital. They see through the ruse and while they do visit him, they don’t act all that sorry for him with the exception of Bobby (played by Patrick Duffy), his brother.

In the midst of this, both J.R. and Sue Ellen press charges against each other. Later, they both decide to drop the charges to protect their son, John Ross (played by Omri Katz). However, Sue Ellen does decide to get a divorce. She doesn’t ask for money, she only seeks full custody of John Ross. She receives it, even though John Ross later decides to live with his father for the time being.

In other happenings, Cliff Barnes (played by Ken Kercheval) finds his long lost sister Pamela Barnes (formerly married to Bobby Ewing) and unfortunately for Cliff and Bobby, she wants to stay lost. What they don’t know is that she only has a few months to live and doesn’t want to bring further pain to anybody else except her and her doctor. Distraught, Cliff returns to Dallas and decides to get out of the oil business. Initially he doesn’t tell Bobby, but Bobby finds out anyway and they end up good friends.

Another minor item of interest includes Carter McKay (played by George Kennedy) being new in town and buying up some land from Clayton Farlow & Miss Ellie (played by Howard Keel & Barbara Bel Geddes) over at the Southfork Ranch. (Read between the lines: He isn’t there just to raise cattle). The only Ewing I really failed to mention was Lucy (played by Charlene Tilton). Basically, she spends most of her on-screen time in wet t-shirts and bikinis.

The major plot story for this season of Dallas involves J.R. & Bobby taking the boys on a hunting trip in a small town where they used to hunt as children. There in addition to catching a few bucks, J.R. decides he wants a rather pretty doe named Cally (played by Cathy Podewell). Eventually, he gets his way with the sweet little waitress and ends up in bed with her (Tell me you didn’t see that coming). Well her brothers and the sheriff don’t take too kindly with that and J.R. gets charged with rape.

Keep in mind, that the rest of the Ewing clan has no idea that J.R. has been arrested and think he is away on a business venture. Well that “business” venture is going cost J.R. ten years on a prison farm. The rest of the show leaves to the plot device of whether or not J.R. will be able to escape prison, get back to his new love Cally or will he have a date with a couple of dueling banjos? (Hey, after watching this season you would throw a Deliverance joke in there too)

I could have spent another half a dozen paragraphs with plot twists galore. After all, it is a soap opera, just shown at primetime. Dallas never really stops for you to catch your breath and makes you get involved in order to keep up with the show. J.R. is as devilish as ever and you spend half the season trying to decide if the show is better off with him in jail. There is something awfully trippy about seeing J.R. in a prison jumpsuit.

The rest of the cast fits in nicely and all of them contribute to the main story as well as contributing to their own individual subplots. The men of Southfork are clearly the main ratings pullers but the females are increasingly finding themselves in the main storylines. It ends up a very nice harmony to see that the majority of the cast has a clear place in provided strong storylines from episode to episode.

The problem is, by this point Dallas was starting to wear thin. It would still carry on for a couple of more seasons but this was the point where it was starting to lose steam. Sure, the writers could pump out stories and cliff hangers but people were starting to change the channel. The only fans that would really remain were the soap enthusiasts who were just happy that their spouse didn’t want to watch sports or 60 minutes.

The video for this series is in the classic 1.33:1 Fullscreen format. The series was made in an era where television was clearly second fiddle to the movies and the show unfortunately has not aged very well. Grain is all way too evident and you will see an occasional crackle as you watch the broadcast. However, it’s not horrible (certainly adequate for fans of the series) just what you would call ordinary.

As explained in the video, television wasn’t exactly up to great standards at the time of broadcast. We only get a Dolby Digital Mono track (English) and it is about what you expect. Everything sits in the center channel. Dialog is clear, but any action scenes or music sounds far away at best. You will still be able to hear and enjoy the show, but it’s nothing more than average for the time period. English subtitles are also provided.

When I was just barely out of college, I actually visited Southfork Ranch with my parents and I did feel a part of history as I was allowed to walk around the place. However, I could feel the place as a shell of what it once was. The twelfth season of Dallas was a very similar experience. Even though the characters are still operating at full speed, you can feel that the show is starting to come to an end. Sure the new storyline of J.R. spending time on a prison farm is going to keep the loyal watchers, but it sure isn’t going to sway any new ones to watch.

This dvd set is also barebones by this point. No commentaries, no featurettes, we don’t even get an automatic trailer or two. Just 26 episodes on 3 discs (double side/double layered) with very little evidence of any touchup on the video or audio. If you’re a fan and already own the other 11 seasons, you are going to get this. If not, then you will just chuckle to yourself and pass it by. J.R…oh how do you get a 20 something beautiful country girl to fall in love with you? Perhaps we’ll never know.

Disc One – Side A

Disc One – Side B

Disc Three – Side A

And Away We Go!
Yellow Brick Road
The Sound of Money

Disc Three – Side B

The Great Texas Waltz
Mission to Moscow
The Reel Life 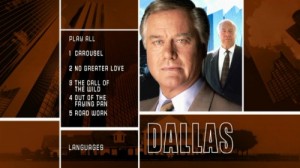 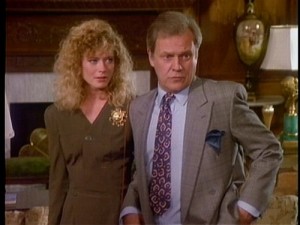 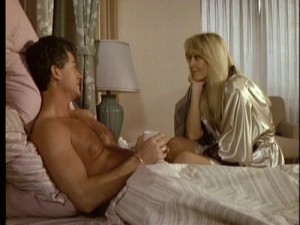 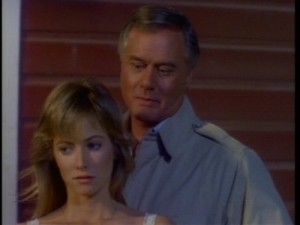 Michael Durr has been reviewing movies for the better part of fifteen years now. He primarily enjoys thrillers, sci-fi, animation and even a little courtroom drama. His favorite films include Escape from New York, the Goonies and anything with Alyssa Milano. When he’s not praising Kurt Russell as the greatest actor of our time or scratching his head over a David Lynch flick, he’s spending time at home in Texas with his lovely wife, Lori and his amazing son. How they put up with him is a mystery, but even Basil Rathbone doesn’t have the time to solve that one.
Last Action Hero (Blu-ray) The Hurt Locker