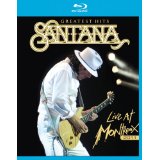 Carlos Santana is too cool for words. When I say that, I refer to both his widely-acknowledged status as a “Guitar God” and to the fact that he doesn’t utter a single word until the 21-minute mark of his latest concert film, Santana — Live at Montreux 2011.  Santana may not be chatty, but he and the rest of his eponymous band do a valiant job of holding your attention throughout most of this 167-minute concert in Montreux (which is in Switzerland, and I’m only a little ashamed to admit I had no idea where Montreux was located before I watched this disc).

The music starts almost immediately after you press play — following a short and sweet on-stage introduction by festival creator Claude Nobs — and what follows is a no-frills performance with minimal between-song banter that will nevertheless delight fans of salsa, jazz and rock and roll, genres that Santana has been masterfully fusing for decades. Santana performs his most popular hits — including “Black Magic Woman”, “Oye Como Va”, “Smooth” and “Maria, Maria” — a few personal favorites of mine (like the playful “Foo Foo”) and more than a handful of instrumental numbers that seamlessly blend into one another. There were a couple of instances where I didn’t even realize a new song had started until I checked the handy track list on the pop-up menu. (That 23-track song list also allows you to skip ahead to your favorite tunes.)

If I were only judging the music, this concert — which also featured brief guest appearances from fellow guitarist Derek Trucks and blues/soul singer Susan Tedeschi — would absolutely get a passing grade. Unfortunately, in reviewing the entire concert film experience, I found Live at Montreux to be quite lacking.

Don’t get me wrong: there’s a great deal to be said for watching excellent musicians — who don’t rely on fancy lighting or pyrotechnics and can (gasp!) play instruments — do their thing on stage. The problem is that it’s just not terribly exciting to watch after a while. There are only so many close-ups of Santana’s “guitar face,” or low-angle shots of drummer Dennis Chambers doing his thing, I can stand before it gets redundant. For example, did we really need two separate drum solos that each last a minimum of four and a half minutes? (Chambers had one of those solos, but the other was performed by Cindy Blackman-Santana, Carlos’ wife and an all-around badass.) Santana himself has a cool allure, but it’s not really enough to hold your attention for a concert that’s nearly three hours long.

Most importantly, I never felt jealous that I wasn’t there (either in the audience or even on stage). Except for some scattered crowd shots, I didn’t get a feel at all for the atmosphere. It felt like this concert could have been taking place anywhere in the world. For me, the key to a great concert experience (even if you’re just watching from home) isn’t just fantastic music, it involves a memorable setting and a magnetic artist giving a performance that demands you put down your CD (or iPod, although I’d guess a large portion of Santana fans still listen to CDs) and go see them live whenever they’re in town.

Santana — Live at Montreux just doesn’t deliver on all those points.

1. Spark of the Divine/ Sun Ra

18. Sunshine of Your Love

*With Cindy Blackman-Santana
**With Derek Trucks and Susan Tedeschi

Santana — Live at Montreux is presented in an aspect ratio of 1.78:1. The 1080i image is arrived at with an AVC MPEG-4 codec at an average of 28 mbps. As I mentioned earlier, there’s not a ton going on with this concert from a visual standpoint, but the images are impressively sharp and detailed. (For instance, the sweat pouring down the performers on stage came through crystal clear.)

As you would expect for a concert film, the outstanding DTS-HD Master Audio 5.1 track was the star of the show. This superb track managed to be both loud enough to make it seem like I was in the front row and nuanced enough to allow every instrument to shine. Not a single drum beat or horn blast was neglected. The only minor quibble I have is that some of the vocalists sounded muffled at times, but that could be an issue with the original live mix. The disc also offers Dolby Digital 5.1 and LPCM Stereo tracks.

Interview with Carlos Santana: (20:16) Santana says more in his 20-minute sit down producer Chris Cowey than he did during his entire concert. Cowey mostly lets Santana talk, but the guitarist generally uses that time to ramble passionately about love, music and what it means to be a true hippie.

Interview with Cindy Blackman-Santana: (10:19) Cowey interacts more with Blackman-Santana during her own 10-minute chat. In turn, she opens up about her early music ties with Lenny Kravitz and falling in love with Carlos.

Behind the scenes: (5:05) You’d think this would be a mini-doc, but this completely skippable feature is mostly on-stage footage of the band performing “Oye Como Va” with brief glimpses of  life backstage mixed in.

Santana superfans will love having pretty much all of their man’s biggest hits — and some deep-ish cuts — in one great-sounding disc, even if it’s not delivered in a dynamic package. More casual fans (like me) will probably roll their eyes at the upteempth guitar solo and eventually lose interest due to the unimaginative presentation.

History of the World in Two Hours The Josephine Baker Story