Posted in: Disc Reviews by Brent Lorentson on March 2nd, 2012 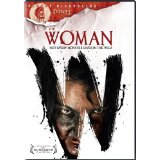 With the release of the book written by Jack Ketchum (author of Offspring) to coincide with the theatrical release of the film, Jack Ketchum and Lucky McKee bring us a horror story not quite like anything we’ve seen for a while.  The Woman is a continuation of the film/novel Offspring that followed a tribe of cannibals struggling to survive.  The Woman is not a story about cannibal, but instead a story about a family being ripped apart by the many secrets they try at all costs to keep hidden.

Chris Cleek (Sean Bridgers) is a small-town lawyer who embraces the role of the alpha male.  He runs his household with an iron fist alongside his timid wife Belle (Angela Bettis) and their three children.  Chris is an avid hunter, and it is on one of his hunts that he discovers a feral woman.  His discovery does more than excite him as he quickly has his family clear out the cellar for a surprise he plans to share with his family.  Following another trip to the woods Chris captures the woman and secures her ‘safely’ down in the cellar.  It’s down in the cellar where Chris decides that it is his duty to help rehabilitate this woman.

There is more going on in this unconventional, family/horror/drama.  Peggy, the oldest of the children, is dealing with bouts of morning sickness and trying to keep her secret safe from all those around her.  Brian has a much darker path as he follows closely in his father’s footsteps and takes to acting out his adolescent sexual urges on the woman in the cellar.  And not to be forgotten, there is Belle, who we watch as all her built up rage and humiliation is ready to boil over.  In the title role of The Woman we have Pollyanna McIntosh, who inhabits this role so well portraying a gamut of emotions from primal rage to maternal nurturer. Every role here is played with such intensity and emotion it is easy to forget this is a horror film.

The film is what many would label a slow burn.  The trips to the cellar grow more tense and descend into darker territory than some viewers may be able to handle.  Lucky McKee has crafted a great little horror film that will stick with you long after the DVD player and TV have been shut down.  It’s a film that created a stir at Sundance last year, and after watching it is easy to understand why.  Here is to hoping the movie gods see fit to give this little gem a life and finds its audience.

The Woman is presented in its original aspect ratio of 1.78:1 The black levels look great here.  My only complaint was with a scene in the first act of the film where the sunlight coming through the trees seemed to blow out the shot more than it should have.  Aside from that one scene the picture looked great.

The Dolby 5.1 track has its pros and cons.  Here is where the film suffers when we go from a quiet moody scene to having pop/rock music assault our ears.  There were times when the dialog was a bit difficult to hear, but going back in 2.0 it sounded clearer.

The score for the film was actually well done, but having the pop/rock songs as well just got to be distracting.

The Making of ‘The Woman’:  This 25 minute look at the making of the film.  Nothing really remarkable here, though it does give us a look at the audience member’s reaction at Sundance last year that got the film some free publicity.

Deleted Scenes: About 5 minutes of clips cut together that were removed from the film.  No hidden gems here.

“Mi Burro” short film: A short animated film that has nothing to actually do with the movie.  It’s directed by Zach Passero who did some animation work on previous Lucky McKee projects.

“Distracted” by Sean Spillane: A montage of stills from the film with one of the songs from the soundtrack playing over.

This isn’t a classic by any stretch of the imagination, but it is a well-executed horror film with something to say.  I wouldn’t throw this on with some drinking buddies to have a good time, but it’s what I would put on for my more serious horror and movie watching friends.  Make no mistake, this is a film that could upset many people, but for those that like their horror with more substance than gore, this one is for you.

Brent Lorentson is a horror writer and film critic based out of Tampa, Florida. With a BA in Digital Film, he co-wrote and co-directed Scavenger Hunt. His short stories have appeared in various horror anthologies. In 2019 his short script Fertile Blood will be a part of the anthology horror film Slumber Party. He is currently working on his first novel A Dark and Secret Place set to be released in late 2019. Favorite Films: Taxi Driver, Fight Club, I Saw the Devil, The Wild Bunch, Dawn of the Dead, A Clockwork Orange, Pulp Fiction, Heathers, The Monster Squad, and High Fidelity.
Insight Thurgood (Blu-ray)