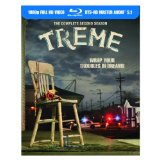 More than any other show, Treme captures the very soul of the city it is set in. Where The Wire may have presented the city of Baltimore as one of the supporting players in the series, Treme is New Orleans. The haunting percussion and brass of the musicians, the lyrical shorthand of its citizens, the quiet desperation of pride after destruction, rampant political corruption and unchecked crime mix together to form an eclectic jazz tempo that makes up the heartbeat of the Crescent City.

If you are not familiar with the series, this isn’t episodic or serial television. It doesn’t neatly wrap up the story at the end of each episode or even at during the season finale. It is loose and undone, yet it flows like transcendent poetry enveloping the senses and carries you down its streets like a drunken parade. This is a visual and audible feast sweeter than King Cake on Fat Tuesday.

A new character, Nelson Hidalgo (Jon Seda), plays a Dallas carpetbagger coming into town to exploit the reconstruction effort. Unfortunately, his is the only character which really doesn’t hold our interest, and I found myself hoping his arc would run out quickly. However, he does well represent the predatory influences which, with the help of rampant political corruption, preyed upon the New Orleans weak and wounded.

These character’s stories swirl and intermingle like a funky gumbo. As in the first season, there isn’t a lead character or story, because the series serves as an avatar of the city itself, but if you allow yourself to take the trip, you will be immersed in a viewing experience as nuanced and inimitable as New Orleans itself. The pacing of Treme: The Complete Second Season, like the first season, is measured with a narrative so free-flowing it stimulates your senses like the Jazz, Blues, Latin, Cajun, and Funk music ringing out into the streets from New Orleans’ myriad nightclubs.

As usual, HBO’s MPEG-4 AVC 1080p/AVC-encoded presentation, running an average of 28 Mbps in the aspect ratio of 1.78:1, is absolutely amazing. Colors are vivid and warm, with natural skin tones and sharp, layered blacks. Details are crisp and refined. There is no distortion, and the grain is natural, giving the scenes rich character. This is another of HBO’s stunning Blu-ray releases. If you are a fan of the series, you will be deeply pleased with the HD quality.

HBO’s DTS-HD Master Audio 5.1 surround track is simply as good as it gets. The music commands the LFE channel. Minute details immerse you in the surround like you were being baptized in Lake Pontchartrain. The dialog is perfectly clear no matter how hushed or buried in live music. The soundfield is breathtaking. Pans and surround dynamics are so natural you will feel you are walking the streets of the French Quarter. Of course the music itself is as much of a star as any of the actors. It is emotional, powerful and moving, perfectly mixed to highlight every haunting performance.

Treme continues to be one of the finest television series on the air, but it won’t be everyone’s cup of tea. I don’t recommend starting with the second season if you haven’t seen the first. If you are a fan of the series, you already understand the sublime experience each episode presents. If you are expecting neat story arcs and episodic wrap-ups you will be deeply disappointed. Treme simply moves at its own pace, the pace of New Orleans. If I have one criticism it is that the despondent nature of some of characters can be a bit depressing, but that is simply life in the Crescent City after Hurricane Katrina. Treme: The Complete Second Season is highly recommended, boasting great repeat viewing value, particularly if you are a jazz fan.

“Even if it isn’t as it should be, even if they make it hard, where else would we go? Who else would have us?”

Into the Abyss (Blu-ray) Only in America with Larry the Cable Guy: Volume Two