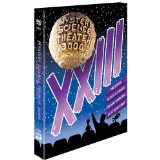 This series from Comedy Central began as a low-budget film hosting show in a small television station in Minnesota. It was the brainchild of Joel Hodgson. It ended up running for 11 years and a feature film version. Mystery Science Theatre is an acquired taste. For me, I’ve really got to be in that certain mood to watch it. That’s the beauty of these DVDs. You pop them in when you’re ready. The idea is pretty whacked. Depending on the season you’ve got, Joel or Mike is trapped in space on the “Satellite of Love”. Doomed to spend his life watching very bad films, our hero makes the best of a bad situation. He uses his resources to construct a couple of robot pals. There’s Crow T. Robot (Beaulieu), Tom Servo (Murphy), and Gypsy (Mallon). Part of an experiment together, they watch the films from the front row, constantly ranting throughout. If you’re like me, you’ve invited a few friends over to watch a schlock festival. The movies weren’t as important as the banter you created while watching. That’s exactly what you see here. The silhouettes of our host and his robots dominate the lower portion of the screen, where they provide alternative dialog and sometimes witty commentary on the action. The two evil station owners/mad scientists send them a new bad film each week to observe their reactions to the bombs. The films are broken up by off-the-wall skits and fake commercials to alleviate the tedium. The collection includes two Mike and two Joel episodes.

If there is a theme to the set it is that three of the four films are from Robert L. Lippert.

You get four discs, each with a different film:

Two couples take the first expedition to the newly discovered planet Nova. They discover some dinosaurs and nuke the joint before heading back home.

This is notable as the first feature by famous B movie maker Bert I. Gordon. The dinosaurs are recycled footage from One Million Years B.C. We’re talking an iguana that one character actually calls a T-rex. The cute factor is provided by a lemur the explorers find and keep with them.

The episode also includes the 1944 short X Marks The Spot by the New Jersey Transportation Department. It’s a courtroom drama where a reckless driver finally kills himself and he and his guardian angel must answer to the “judge” for his lifetime of careless and dangerous driving.

Skits include a really bad Joe The Lemur song, a poetry reading, and a squashed Dr. Forrester.

Duke (Ellison) is a drifter who finds himself in the middle of a range war and framed for the murder of his sweetheart’s father.

It’s pretty much a lot of short scenes with folks mobbing and dropping stuff. Olin Howland is the only entertaining character as the town’s old codger and jack of all trades.

The skits here are actually the best I’ve seen on the show. When Dr. F and Frank try to send something during an ion storm, characters get switched with their evil counterparts from Star Trek’s Mirror Universe. For a short while the switched Dr. F and Frank do the riffing.

Sean Donovan (McShane) arrives in Hawaii, and he’s up to no good. He’s going to steal a top secret chemical weapon. It’s up to secret agent Diamond Head played by The Invaders Roy Thinnes to stop them. He’s helped by Hawaii Five-0’s Zulu.

Quinn Martin actually produced this as a television series pilot that didn’t sell. Just five minutes and you’ll understand why.

There’s also a short film called A Day At The Fair and is a 1950’s chronicle of farmers getting ready and attending a state fair.

Skits involve the bots finding out what it would be like if Mike wasn’t such a nice guy.

Fu Manchu (Lee) has captured an important scientist who can help him threaten the world with a freeze ray. Unfortunately, said scientist has a heart attack. Now Fu Manchu captures Dr. Kessler and his girl to perform the world’s first heart transplant from a live nonvoluntary donor. Meanwhile Scotland Yard is also trying to bring down Manchu’s operation.

This was the last and worst of the Christopher Lee Fu Manchu films. It was actually withheld for years after filming. I guess even the crew knew how bad it really was.

Skits include a really cheesy flying carpet gag and a lot of crying emotional bots.

Each episode of MST3000 is presented in its original full frame format. It doesn’t really matter what the original film intent might have been. These prints are far better than they deserve to be. Mostly the low-budget prints are surprisingly clean. Now, that’s not to say they look good at all. Colors are always washed out. It’s just that these films really don’t warrant anything better than poor. Of course, colors and black levels are highly variable from episode to episode. The MST3000 stuff is pretty much nicely reproduced. We’re talking cardboard sets here, so they look pretty bad, but at least they look bad in nice color and definition. If you’re a fan of this show, you’re not here for the video specs.

The Dolby Digital 2.0 track is often terrible. Dialog on the films is often muted or unintelligible for a variety of other reasons. Musical scores are more often than not distorted. Dynamics is a word with no association at all to these productions. Still… that’s not what you’ll be buying them for. Fortunately, every word of wit and wonder from our hosts is clearly audible. Don’t take this the wrong way, but bad is good here.

Codename Quinn Martin: (6:37) Martin biographer talks about the man and his shows.

Life After MST3K With Kevin Murphy: (9:24) Murphy tells us what he’s been up to since MST3K left the air.

The Incredible Mr. Lippert: (35:50) This is a nice little biography of the theater chain owner who got into making films to have something to show at his theaters.

By now you already know what to expect here. Shout continues to deliver these 4-film sets which give me just the right dose of the show at one time. I know some of you have been calling for season sets, but that would be a ton of discs at a time. That means more money. It could spell a quicker end to the releases. For now, enjoy “the trickle-down theory of plots”.

Gino Sassani is a member of the Southeastern Film Critic's Association (SEFCA). He is a film and television critic based in Tampa, Florida. He's also the Senior Editor here at Upcomingdiscs. Gino started reviewing films in the early 1990's as a segment of his local television show Focus. He's an award-winning recording artist for Omega Records. Gino is currently working on his 8th album Merchants & Mercenaries. Gino took over Upcomingdiscs Dec 1, 2008. He works out of a home theater he calls The Reel World. Favorite films: The Godfather, The Godfather Part II, The Body Snatcher (Val Lewton film with Karloff and Lugosi, not the pod people film), Unforgiven, Gladiator, The Lion King, Jaws, Son Of Frankenstein, The Good, The Bad And The Ugly, and Monsters, Inc.
Step Up Trailer Chuck: The Complete Fifth Season (Blu-ray)