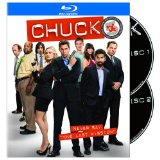 “My name is Charles Carmichael, and I have one final question for you. Have you ever had to subdue a Basque terrorist on a Swiss train? Or fight your way through the jungles of Southeast Asia? Or, take out an arms dealer with a penchant for murder and ice cream? Well… we have.”

And, if you’ve been a fan of Chuck for the last five years, you know exactly what we’re talking about here. And, for now, the ride has come to a close. Fear not, fans. This is quite a satisfying ending. And when you consider that by rights the show should have gone away after the second season, if you trust those guys at the Nielsen’s, we’ve been given quite a lot of bonus time with Chuck.

In the first season we met Chuck Bartowski (Levi). He was a super-smart student at Stanford when his best friend Bryce Larkin (Bomer) set him up to take the fall as a cheater and he was kicked out of school in disgrace. The only job he can get now is working at the Buy More (Best Buy) on the Nerd Herd (Geek Squad). But Bryce wasn’t done with Chuck yet. Turns out that Bryce was a CIA agent who had been working on the top secret project called Intersect. The Intersect is a computer program that can download the entire government’s database into a person’s brain through a series of coded flash images. Not content with getting him kicked out of school, Bryce tricks Chuck into getting the Intersect inside his brain. Chuck becomes an important government asset and in need of protecting. Enter CIA agent Sarah Walker (Strahovski), who is Chuck’s CIA handler. Their cover is boyfriend and girlfriend, which confuses Chuck’s family and friends, who never thought he could get such a hot girlfriend. The muscle for the team is Agent John Casey (Baldwin), who resents being assigned to such a lame mission. Not only do they have to keep Chuck and the Intersect safe, but they must take untrained Chuck on their missions because of the intel stashed in his brain. While Chuck is not consciously aware of the information he carries, when he sees something that triggers a piece of the data, something they call flashing, he is able to access the relevant data.

Now Chuck and Sarah are married and running a private security firm on their own with Casey and Morgan (Gomez), who now has the Intersect instead of Chuck. They still live next door to his sister Ellie (Lancaster) and her husband Devon (McPartlin), also known as Captain Awesome because of his propensity to use the term awesome. Both are doctors at the local hospital. Also at the Buy More is Jeff (Krinsky), a burned-out druggie and drinker, and Lester (Patel), a rather clueless Indian (from India). The store was once managed by Big Mike (Lawrence), who would rather be fishing. Now he’s Morgan’s assistant manager.

It’s a wonderful final send-off for the gang of Chuck. Morgan struggles with the Intersect, and for good reason. It’s defective, and it’s frying his brain. The season includes a recurring role by The Martrix’s Carrie-Anne Moss. She plays a rival to Carmichael Industries and a love interest for Casey. If that’s not enough, how about Bo Derek as… Bo Derek, and she’s a spy. All of the characters get great moments, and the end story will leave you more than a little emotional. I won’t ruin it in case you’re waiting for the discs. They crew took quite a chance with one of the more unusual character turns for a series and leave you full circle once again. Too often shows leave you unsatisfied. And, while you might never be able to get enough Chuck, this will certainly be a fitting goodbye, while holding the door just slightly ajar for future adventures in one form or another.

Each episode of Chuck is presented in its original broadcast aspect ratio of 1.78:1 The 1080p high-definition image comes to you through a fine AVC/MPEG-4 codec. The image is superior to the DVDs and the broadcasts. The two discs run six and five episodes each. While colors really pop and detail is high, there is a pesky digital noise issue that pops up from time to time and can be extremely distracting. Fortunately, it’s not the default image quality.

The DTS-HD Master Audio 5.1 track works just fine. The subtle ambient stuff here is wonderfully placed, allowing you to immerse yourself totally in the show. Dialog is always clear and right where it should be in the mix. There’s a lot of pop here for a television show with plenty of explosions and firefights.

Declassified Scenes: Throughout the set there are these deleted scenes.

Extended Finale Episode: Be warned here. They hid this in a sub-category and I didn’t know it was here until I already watched the finale in its broadcast form.

Sandwiches And Super Fans: (10:20) This is a well-deserved and emotional tribute to the fans who saved the show time and again over the five years.

Scoring The World Of Chuck: (6:10) Tim Jones has been providing the music of the show since the pilot. He gives us a tour of his various methods of scoring the different kinds of moods and scenes.

Chuck vs. The Final Episode: (14:26) Contains spoilers, so watch the episode first.

Chuck vs. The Beginnings: (5:26) Cast and crew reflect on the origins of the show.

Chuck Through The Years: (11:16) The cast talk about the evolution of their characters and themselves as people during the five years of the show.

Chuck vs. The Future: (4:21) The cast reflect on what they think their characters are doing in the future. This is not what you expect, so calm down. There is no speculation or revelations on future projects here.

The show has survived this long because of one of the best fan bases in television history. They might not be the largest, but they’ve carried this show on their shoulders for five years. The show has been on the ratings bubble each year that it’s been on. It wasn’t even on the schedule the second year, at first. Fans did the usual letter writing and internet campaigns. But these fans were smart. They went directly to the show’s sponsors and committed to buying their products. Fans went to Subway and put together viewing parties where they would buy subs and watch the show. These fans understood that emotions and passions are certainly important to the network executives, but this is, after all a business. They showed support to the people who provide the economic support to the show. It worked well enough to get four extra years out of a series that the networks tried to kill from the beginning. I don’t know if we’ll see these characters again in the future. I think the potential for a feature film is huge if fans might be willing to trade those subs for popcorn pledges, who knows. If television and films have taught us anything over the years, it’s “You never say one final mission”.

Gino Sassani is a member of the Southeastern Film Critic's Association (SEFCA). He is a film and television critic based in Tampa, Florida. He's also the Senior Editor here at Upcomingdiscs. Gino started reviewing films in the early 1990's as a segment of his local television show Focus. He's an award-winning recording artist for Omega Records. Gino is currently working on his 8th album Merchants & Mercenaries. Gino took over Upcomingdiscs Dec 1, 2008. He works out of a home theater he calls The Reel World. Favorite films: The Godfather, The Godfather Part II, The Body Snatcher (Val Lewton film with Karloff and Lugosi, not the pod people film), Unforgiven, Gladiator, The Lion King, Jaws, Son Of Frankenstein, The Good, The Bad And The Ugly, and Monsters, Inc.
Mystery Science Theater 3000: XXIII Mother’s Day (Blu-ray)