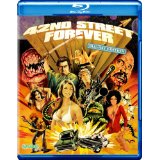 “His name is Samson. He’s big with his cat, with mama and with his stick. Black Samson… he’s mean and clean and rules the scene.”

42nd Street Forever makes a perfect party complement. Your guests will be amazed these unbelievable trailers were real movies in the first place. Warning, these trailers are not politically correct. In fact, many of these movies could never be made in today’s socially correct climate, and some probably should never have been made in the first place. Some of these previews might leave you feeling little dirty, exploited, and in need of a shower, giving a lurid subtext to the term “Coming Soon.”

I doubt many of these films even still exist. Synapse Films presented this amazing collection of trailers in a series of 42nd Street Forever DVDs, this blu ray incorporates the two in the series as well as an additional, previously unreleased sampling of grindhouse trailer insanity. I dare you to watch these and not want to acquire some of the titles for your personal collection. Many of them I just wanted to see to claim I had. These are not great films, but they are unforgettable.

The set is grouped in genres, starting with blaxploitation, then vengeance films, sexploitation, and so on. I personally wouldn’t have gone this route as things can get a bit repetitive, after about the fifth blaxploitation or sexploitation trailer in a row you start growing numb to the style. The menu interface is frustratingly awkward for a Blu-ray release. It takes forever to scroll through individual chapters and returns you to the beginning of the list after each viewing. However, menu notwithstanding, this rare collection is as wonderful, weird, and compelling as sneaking under the tent of a midnight carnival freak show.

4. The Guy from Harlem

18. The Teasers Go to Paris

25. When Women Had Tails

38. The Raiders of Atlantis

41. They Came from Beyond Space

46. The Undertaker and His Pals

58. The Flesh and Blood Show

74. Kiss the Girls and Make Them Die

75. The Last of Secret Angels

42nd Street Forever is a MPEG-4 AVC encoded presentation running in a 1.78:1 aspect ratio running an average of 23 Mbps. Considering the endless glitches, scratches, color washout, and general low-budget source problems, watching the trailers on 42nd Street Forever is a bit like watching them projected on a dingy dark grindhouse theater screen. There really isn’t any reason this is in HD, but this is no doubt as good as these will ever look. The definition and detail is there, but it only serves to highlight the original film source problems.

42nd Street Forever is presented with a DTS-HD Master Audio 2.0 soundtrack. There is no surround or even stereo in most cases. Like the video, the audio quality varies trailer by trailer. The low-fi mono helps to establish mood of the original presentations.

Apparently there are a few trailers on DVD volumes 1 & 2 which didn’t make it to this compilation due to quality issues. That said, this is still the best collection of risky and avant-garde grindhouse trailers ever gathered. It serves as a wonderful introduction into the world of underground cult movies. Watch with friends for an excellent cultural shock treatment.

“It happens two hundred and fifty thousand times a year. Where is your daughter tonight? This is the story of a girl who wasn’t careful. Teenage Mother means nine months of trouble.”