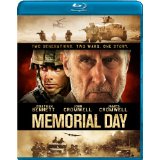 “It’s Memorial Day. What am I supposed to remember?”

Happy Memorial Day, everyone! When I saw that I would be reviewing a movie called Memorial Day, I was afraid Garry Marshall had made another one of his awful ensemble romantic comedies — ala Valentine’s Day and New Year’s Eve — that stars everyone in Hollywood…and Hector Elizondo. Thankfully, this film is simply an (overly) earnest dedication to the men and women who have served in the Armed Forces, as well as their families.

The movie follows the multi-generational story of the Vogel family. After Kyle Vogel (Jonathan Bennett) is wounded in Iraq in 2005, he lies in a hospital bed and recalls Memorial Day in 1993. That was the year a 13-year-old Kyle (Jackson Bond) convinced his grandfather Bud (Oscar nominee James Cromwell) to open up about his experiences in World War II after discovering the older man’s footlocker. From there, we flash back yet again to a younger Bud (John Cromwell) in the mid 1940s and his time in Holland, Belgium and Germany.

At that rate, I suppose the movie could’ve kept going all the way back to the days of the American Revolutionary War. However, director Sam Fischer and screenwriter Marc Conklin seemed particularly interested in exploring the grandfather/grandson relationship and how that sort of paternal bond sometimes skips a generation.

Despite being confined to a porch rocking chair for the majority of his screen time, James Cromwell delivers a quiet powerhouse of a performance as a frail man haunted by a past he’d rather not remember. (And, as the movie not-so-subtly reminds us, it’s a past that’s slipping away from his mind.) Although Bond does an admirable job opposite Cromwell in their 1993 scenes, the Oscar nominee is almost too good; he makes his less experienced fellow cast members look somewhat amateurish by comparison. Bennett does solid, unremarkable work as the present-day version of Kyle, while John Cromwell gives a good, understated performance, but lets the striking resemblance to his dad do most of the work. The rest of the cast is rounded out mostly by inexperienced actors, which sometimes leads to questionable line readings.

Still, this is far from the movie’s biggest problem. In trying to tell an exceedingly respectful story about military personnel and their families, the movie plays it too safe and brings almost nothing new to the table. Though Minnesota impressively stands in for both 2005 Iraq and 1944 Western Europe, the battle sequences are pedestrian. (I understand Fischer wasn’t working with the biggest budget in the world, but even a little ingenuity would’ve gone a long way.) On top of that, the storytelling devices — the reminiscing soldier on a hospital bed; the grandfather relaying his story to a headstrong kid — are both cinematic cliches we’ve seen done much more effectively in previous movies. In short, the movie fails to offer any new or penetrating insights into the history or significance of Memorial Day.

As it stands, Memorial Day honors America’s veterans with an old-fashioned tale told in an old-fashioned way. That lets me know, for better or worse, the movie’s squareness is probably not an accident.

Memorial Day is presented in an aspect ratio of 1.85:1. The 1080p image is arrived at with a VC-1 codec at an average of 22 mbps. The video presentation is, in my opinion, the absolute highlight of this Blu-ray. The action in the movie takes place in several different time periods, and the spot-on contrast and color levels (grayish tint for the WWII scenes; overexposed yellows and brightness for the Iraq sequences) help tell you exactly where/when you are. On top of that, there is a sharp picture throughout (including close-ups), nice depth to the outdoor sequences, and solid blacks.

The DTS-HD Master Audio 5.1 track predictably comes alive during the battle sequences, but also does nice work with ambient noise during the quieter outdoor scenes. (Particularly when Bud and young Kyle are hanging out on the porch and listening for birds.) The dialogue is adequately clear throughout (though the level seems to drop in a few instances), but composer Paul Hartwig’s score is occasionally overbearing.

Audio commentary featuring director Sam Fischer, writer Marc Conklin and actor John Cromwell: This is a pleasantly chummy conversation between the trio, who talk about how they managed to make Minnesota stand in for Iraq, how they hired World War II re-enactors to play soldiers and the importance of passing on the stories from WWII (and other conflicts) to future generations.

Behind the Scenes: (1:54) I wouldn’t even call this a behind-the-scenes documentary. It’s really just a collection of images from the movie’s set (including various people goofing off) accompanied by some adrenaline-pounding music. They didn’t even bother with talking head interviews. At least it’s presented in HD. (In a related story, this is kind of a waste of HD.)

Memorial Day — which focuses more on the veteran experience than it does on combat — doesn’t re-invent the war movie wheel (nor is it trying to). I respect the movie for taking a considerably less cynical approach to the subject of war in favor of reverentially honoring the men and women who have made the ultimate sacrifice while serving in the United States Armed Forces. I just wish the result had been a much more dynamic cinematic experience.

Still, this is a fine-looking Blu-ray (out on May 29) that will make for a decent, inoffensive viewing option during future Memorial (and Father’s) Days.