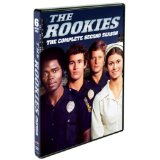 It all started as an ABC television movie about three police officers fresh from the academy. They had their passions and ideals and were ready to take on the world. The telefilm featured Kolchak: The Night Stalker’s Darren McGavin as Lt. Ryker, the grizzled veteran police mentor and boss for the three rookies. By the time the show went to series the role was recast with Gerald S. O’Loughlin as a slightly more understanding version of the character. It was obviously decided to make him less harsh and more amicable in personality. The three rookie cops remained the same. Greg Stanford Brown played Officer Terry Webster. Michael Ontkean played the most youthful and idealistic Willie Gillis. He would leave the series after the first two seasons. Sam Melville played the older and married Mike Danko, who was ex-military. He was married to nurse Jill Danko played in the pilot by Jennifer Billingsley, and in the series by future Angel Kate Jackson fresh from her stint on the horror soap opera Dark Shadows. She presented the softer side of the show as well as being the trio’s inside “man” at the hospital where many victims and perps ended up.

You see this was an action series all the way. Starsky & Hutch creator William Blinn provided the same kind of action you would later expect from his signature series. There were tons of car chases and shootouts. Pretty much all of the regular characters were shot or seriously wounded before the show ended after four years. That included Ryker and Jill. Both were shot and in critical condition at one point or another. Even though our Rookies were patrol officers they managed to get involved in the investigation of many of the crimes. Ryker kind of took them under his wing and gave them high-profile assignments that would not have really fallen to rookie cops. Often Webster and Gillis rode together on patrol, which never would have happened in reality. There isn’t a force in America that’s going to partner two rookies. The city was L.A. but it was not really portrayed as such. The force was always represented as SCPD, with SC never really given a name much as Hill Street Blues was never identified as a particular city even though it was filmed as Chicago.

There is also a great presence felt from producer Aaron Spelling. He would go on to bring us Charlie’s Angels, which would borrow heavily from the kind of stories and setups found here. The Rookies also spawned a spin-off which might have been even more popular. S.W.A.T. was even more of an action drama that gave us a top 40 theme hit and a couple of recent feature film versions. S.W.A.T. only lasted two seasons, but it has managed to stick in our collective memories even more than its parent series that lasted twice as long.

The show was guilty of overplaying its title. Of course, they weren’t really rookies for four years, but it is explained early in season 2 that there is still a lot of learning and training to do before an officer is really a veteran. The show is obviously dated. It’s loaded down with 70’s clichés and stories. The show did not shy away from controversial issues. One story in season 2 deals with a Vietnam vet struggling to adapt after coming home. In 1973 that was quite a hot topic indeed. The chemistry between the main characters was pretty solid, and the shows were always entertaining even if hey were a bit predictable.

You get all 23 episodes on six discs with no extra features. It’s a good package for an old favorite. Shout serves ’em up. “We book ’em.”

Gino Sassani is a member of the Southeastern Film Critic's Association (SEFCA). He is a film and television critic based in Tampa, Florida. He's also the Senior Editor here at Upcomingdiscs. Gino started reviewing films in the early 1990's as a segment of his local television show Focus. He's an award-winning recording artist for Omega Records. Gino is currently working on his 8th album Merchants & Mercenaries. Gino took over Upcomingdiscs Dec 1, 2008. He works out of a home theater he calls The Reel World. Favorite films: The Godfather, The Godfather Part II, The Body Snatcher (Val Lewton film with Karloff and Lugosi, not the pod people film), Unforgiven, Gladiator, The Lion King, Jaws, Son Of Frankenstein, The Good, The Bad And The Ugly, and Monsters, Inc.
Todd Barry: Super Crazy Dexter: The Sixth Season (Blu-ray)