Posted in: Disc Reviews by William O'Donnell on November 26th, 2012 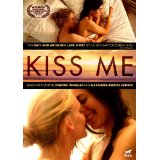 Mia is a successful architect who has recently become engaged to her boyfriend Tim. While attending her father’s own engagement party she starts a flirtation with her soon-to-be sister in law. From there, a full on romance blossoms that looks to tear apart all she had established with her fiancée, and the rest of her family.

This is not really a typical romance story. Rather, it is a tale of how a woman acknowledges, then painfully accepts her true feelings and desires. Mia is a lesbian who has not accepted her identity as such until Frida, the aforementioned future sister-in-law, seduces it out of her. There is a ton at stake that goes well beyond flirtation. Mia has not come out to her family, and this revelation ruins her engagement and creates a strange link between hers and Frida’s family since they are on the brink of becoming related by law.

The dissolving of Mia and Tim’s relationship is painful to witness.. The first sign of something being off between them is the very opening scene where they are having sex but the frame has been turned upside down. The audience is left with a sense of unease and discomfort that is meant to tell us that ‘something isn’t right.’ These feelings are confirmed when we compare their lovemaking to what transpires between Mia and Frida. The passion expressed between them has an intensity that Mia did not come close to achieving with Tim. Even later in the film still, we see another bedroom scene with Mia and Tim only this time he is holding her down, forcing her into an intimate moment in an abusive way. The frame is upside down once again, amplifying the sense of unease already created by seeing, what looked like it could almost have been, a rape.

Indeed, Tim loses on all fronts in this film. He loses the love of his life, states that his world has been destroyed, and is frequently depicted as hot-headed and even dangerously aggressive (I refer back to the scene where he started to sexually assault his fiancée). The audience should be sympathizing with the deconstruction of this man’s life, and yet he has not been depicted too positively. Tim is not the antagonist in this story, but he does seem o be the loser in a battle he didn’t realize he was in.

This is a very beautiful looking film. Be it miserable or bright (in both mood and environment), Director Alexandra-Therese Keining does her best to ensure every setting is shot to look as esthetically pleasing as possible. This creates an interesting allure since the audience wishes to be present in every scene, yet should be repelled by the immense tension created by the character’s (mostly Mia) emotional burdens.

Widescreen 1.78:1. As mentioned earlier in the review, this is a beautiful looking film. This DVD presentation does well to keep things looking very bright and clear. I can only imagine just how amazing it would look in Blu Ray HD.

Dolby Digital 5.1 and 2.0 are both available. I may not understand their language but the inflections and emotions in their voices are perfectly conveyed thanks to a clear and well-mixed sound presentation. There is a good balance in all the speakers. This Drama does not have a very dynamic score or special f/x, but what is created sounds good.

Music Video “Love Stream” : Comprised entirely out of clips from the film.

The DVD packaging promotes it as a new high standard for Lesbian films. I may well agree with that, but I try to see this as film that can reside outside of the subgenre. Perhaps I do not enjoy the implications that title can have, and the effect it would have on the characters. I just fear that the character of Tim would be vilified too much if it were perceived that he’s trying to deny Mia her true sexuality. This would also, to me, cheapen Mia’s journey of self-discovery. She is not trying to overcome Tim, for she acts on her own accord, for herself.

I would rather see this film accepted as the beautiful drama it is without being pigeonholed or ignored by those who mistakingly overlook films because of it’s homosexual subject matter. People shouldn’t do this anyways, nor should films hide their subject matter. Editorial rant over.