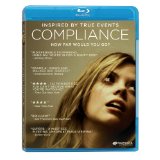 If Compliance weren’t based on true events, the film’s plot would immediately be dismissed as implausible and insulting of its audience’s intelligence. (Same with Argo.) As the story of an incredibly committed prank caller and his unwitting prey progresses, there’s a pretty good chance you’ll repeatedly roll your eyes. There’s an even better chance the eye rolling will be followed by a feeling of outrage — definitely toward the caller, but maybe even toward the gullible victims — when you remember this stuff actually happened.

Sandra (Ann Dowd) is a stressed-out manager at ChickWich, a fictional fast food restaurant. During a busy Friday shift, she receives a call from a man identifying himself as “Officer Daniels” (Pat Healy), who claims one of Sandra’s employees stole money from a customer. Officer Daniels convinces Sandra to interrogate teenage cashier Becky (Dreama Walker) in the restaurant’s back room. What follows is a slow and steady stream of humiliations for Becky as Sandra instructs her employees — and eventually her fiancé, Van (Bill Camp) — to follow the officer’s increasingly bizarre instructions.

The particular incident depicted in Compliance occurred in a McDonald’s restaurant in Kentucky almost nine years ago, but the film’s themes are both timeless and incredibly timely. Most of us are taught at a very young age to respect authority. Meanwhile, if the Manti Te’o saga has taught us anything it’s that Notre Dame linebackers are unbelievably gullible and/or spectacular liars we don’t always know who is on the other end of the line.

Writer/director Craig Zobel is upfront with his audience, placing the words “Inspired by True Events” in big, white letters at the start of his film. (A postscript informs us that more than 70 similar incidents occurred in 30 states.) For people who aren’t familiar with the real-life story, the filmmaker eliminates any possibility that Officer Daniels might be a real policeman by actually showing us the crank caller at home as he casually guzzles down a ChickWich beverage and fixes himself a sandwich.

Dowd is terrifically pathetic as Sandra. Early on, the film establishes that Sandra has reason to be insecure about her employment, which helps explain why the manager might go out of her way to keep things running smoothly at her restaurant. With very limited screen time before Officer Daniels’ phone call, Dowd shows us her character’s intense insecurity, as well as some jealousy toward pretty, young Becky. Sandra is properly conflicted about some of the things Officer Daniels asks her to do, but she also eats up his compliments like they’re candy.

Walker doesn’t have as much to work with since Becky is frankly depicted as somewhat of a bubblehead early on. If Zobel was trying to make a point about how the caller targeted establishments with workers who may not be too educated or street smart, then it was too subtle. Once Becky’s sham interrogation begins, the actress gamely takes her character from naïve to reasonably defiant before finally becoming deflated in her humiliation.

You’ve probably guessed by now that there’s not a ton of humor in this film. However, one of the sneaky jokes I enjoyed from Zobel’s script was the idea that the “worst” employee — a disobedient youngster named Kevin (Philip Ettinger) — was the only person who refused to go along with Officer Daniels’ instructions early on. Zobel also seems to curiously let Sandra’s fiancé off the hook the slightest bit by suggesting he had been drinking earlier in the evening, making him more pliable and perhaps affecting his judgment. Finally, I think the filmmaker went a step too far in showing us how average of a guy “Officer Daniels” really was. At this point in time, I don’t think we need to be hit over the head by the idea that monstrous behavior can come from the most unexpected places.

As far as Zobel’s directorial choices are concerned, I absolutely could’ve done without the conspicuous close-up of a straw after Becky’s worst indignity. I also felt the film’s final act — the aftermath of Sandra and Becky realizing they were the victims of a hoax — felt somewhat rushed.

Compliance is presented in an aspect ratio of 2.35:1. The 1080p image is arrived at with an AVC MPEG-4 codec at an average of 24 mbps. The low-budget indie was shot digitally, so it’s no surprise that grain is virtually nonexistent. Instead, we get a consistently clear image that occasionally excels during choice close-ups. (French fries; that damned straw.) Since the ChickWich isn’t the most glamorous location, colors are purposely muted. I get the sense the yellow and orange from those garish uniforms would be much louder in person. Certainly not the flashiest presentation — the grand majority of the movie takes place in a dingy back room — but pretty impressive nonetheless.

The DTS-HD Master Audio 5.1 track knows what its priorities are with this dialogue-driven film. Everything is perfectly intelligible, including the phone dialogue from Officer Daniels. The rear speakers and subs mostly come to life whenever the majestic, cello-heavy score by Heather McIntosh pipes up. (She’s like a junior Phillip Glass.) Immersion, however, comes inconsistently from chatter in the restaurant’s dining area.

Behind the Scenes of Compliance: (2:04) Zobel and Dowd describe the film’s premise between clips. Dowd reveals that it helped actually having Healy on the other end of phone during their scenes. Not surprisingly, this two-minute doc doesn’t go very deep.

Interview with director Craig Zobel: (10:09) The Blu-ray’s best special feature finds the director answering (unseen and unheard) questions about his film. Zobel reveals he was attracted to the project after reading about the work of Stanley Milgram, who conducted experiments on obedience to authority figures in the ‘60s. The director also talks about the challenge of keeping his film visually interesting as well as his hope that the story will stay with viewers long after they’re done watching it.

AXS TV: A Look at Compliance: (3:46) Totally skippable mini-doc featuring more clips from the film as well as comments by Zobel taken from the interview we just discussed.

Compliance, with a big boost from a pair of great performances, is both thought-provoking and uncomfortable to watch. I do wish the bonus material on this Blu-ray was more substantial. Excluding information from the real-life cases — especially the players behind the specific prank that inspired this film — was a missed opportunity.

Though I wish the filmmaker had pulled back on some of his directorial tricks and fully trusted his stranger-than-fiction plot, Zobel has made an impressive feel-bad movie.