The Amazing Adventures of the Living Corpse (Blu-ray) 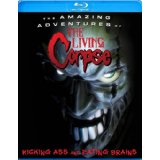 Earlier this year, Warm Bodies become a solid box office hit by giving its zombie hero a heart. The Amazing Adventures of the Living Corpse seeks to carve its own uniquely bloody path by saddling its undead protagonist with a soul. It’s a clever way to go considering there’s not much new territory to cover in zombie fiction 45 years after George A. Romero’s Night of the Living Dead shambled into pop culture immortality. I just wish this provocative promise had yielded a better movie.

Based on the Dynamite Publishing comic series “The Living Corpse: Exhumed”, the film introduces us to John Romero, who rises from his grave and promptly snacks on his own wife and daughter. As a horde of the undead prepares to eat his son Taylor, John realizes what he’s done and saves his only surviving family member. Confused as to why he’s the only zombie with a conscience, he ventures to the underworld, where he is counseled by Asteroth Guide of the Wretched and Worthless Merk (the movie’s source of “comic relief”). Meanwhile, a traumatized Taylor is taken to a sinister boarding school filled with other misfit orphans and inconveniently located next to a cemetery.

Time passes and John becomes a soldier of the underworld, destroying a variety of demonic creatures in his journey to find Taylor. Meanwhile, Taylor is eventually taken under of the wing of mad scientist Dr. Brainchild, who seeks to unlock the secret of eternal life.

As you can see, there’s some interesting stuff going on here. Plenty of books, movies and TV shows are obsessed with finding out what it means to be alive, but The Amazing Adventures of the Living Corpse explores what it means to be undead. On a more basic level, the idea of John Romero — whose name is a clear nod to the godfather of zombie fiction — becoming a sort of zombie superhero is awesome. Unfortunately, the movie is sabotaged by storytelling that is stiffer and creakier than its undead protagonist.

I’ve never read “Exhumed”, but the film adaptation — co-written/co-produced/directed by Justin Paul Ritter — never lets you forget the material’s comic origins. This isn’t as big of a problem when it comes to the look of the film; the animation may not be top-notch, but the graphic novel-style design is a good match for the story. The big problem comes whenever characters interact with each other.

Most scenes featuring dialogue are painfully awkward and stilted. Every character talks as if they’re reciting words in a comic book dialogue bubble rather than organically interacting with the other character on-screen. This is especially noticeable in every exchange between tortured protagonist John and Asteroth, who is supposed to be his guide in the underworld, but mostly spouts a bunch of pseudo-philosophical mumbo jumbo. Meanwhile, we get to see Taylor both as a child and as a young man, but each voice actor portraying him is equally terrible.

The action sequences come few and far between, but what we do see — including John’s climactic fight against undead super soldiers — is pretty stylish. The Amazing Adventures of the Living Corpse also has an admirably unsentimental ending and a vivid view of the underworld. Since it’s so much easier to bring that sort of fantastical realm to life in an animated film, I really wish the movie had spent more time down there than among the living.

The Amazing Adventures of the Living Corpse is presented in an aspect ratio of 1.78:1. The 1080p image is arrived at with an AVC MPEG-4 codec at an average of 28 mbps. As I mentioned before, we’re not exactly talking Pixar-level visuals here, but that’s ok. The movie’s boxy CGI design — think Star Wars: The Clone Wars — works for the material. This Anchor Bay Blu-ray does a terrific job of bringing the visuals to life thanks to a slick, detailed presentation highlighted by vivid colors and strong black levels. Most impressively, there’s a strong sense of depth and perspective throughout the film. (Anchor Bay previously announced a 3D version of the film, but that depth comes through quite well in 2D.)

The Dolby TrueHD 5.1 track grabs you by the throat right from the very start thanks to an opening thunderstorm that brings both the subs and rears crashing to life. The track remains quite dynamic throughout with sounds (marching soldiers, gunshots) hopping from the fronts to the rears seamlessly. It’s an aggressive track for sure, but it also knows when to back off for some of the film’s more introspective moments. (The rock-heavy score by Daniel Iannantuono and Lila Senior can still be heard during these scenes, but is much quieter.) The biggest problem is the dialogue doesn’t always synch up with what we’re seeing on screen; it’s so bad at times, it made me wonder if the movie was originally made in another language. I would’ve loved to have gotten an answer to that question and others but…

…there are no special features on this release, which is always a shame, but it’s particularly disappointing when you consider the possibilities here. (The filmmakers and/or comic book artists could’ve discussed their unique story, we could’ve gotten some comic-to-film comparisons, etc.)