Posted in: No Huddle by Brent Lorentson on August 14th, 2013 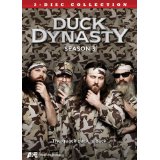 The quack pack returns for season three of the A&E reality series smash hit, Duck Dynasty.  After season 1 I was thinking perhaps this would be a show that would be amusing but quickly lose steam with the season that would follow.  I couldn’t have been more wrong.  The Robertson family is quickly becoming the most recognizable family on TV considering they are flooding the stores with their books, DVD’s, and many other products you can find at Wal-Mart.  I can’t help but think this is a family that is doing everything right, and good for them for the success they’ve managed.

Season 3 offers up another 13 episodes of “reality” television the entire family can watch together.  The storylines may be more scripted than I’d like, but let’s face it, reality TV would be boring if not for producers putting together scenarios to hold our interest.  As for the personalities of the family involved throughout the show, I’d like to believe they are no different once the cameras stop rolling.

Things get off to a slow start with this season.  Willie, the CEO of Duck Commander, finds himself going to yoga class to lose some weight for his high school reunion, to the gang trying to catch a giant lizard that escapes into the factory just seemed as though the show runners were trying too hard.  But then Let’s Go Hunting, Deer comes along, where Willie and his brother Jase decide to take their wives hunting and things start to perk up.  After Willie’s wife Korie accidently sprays doe urine on herself, what follows is pretty funny and entertaining.  Sure, it’s seeing the wives out of their element; that is amusing, but the fact the brothers are doing this to also involve their wives in what they do that makes the suggestion sweet but still doomed from the start.

Seeing a positive reality show is refreshing, and the fact that it’s not filled with backstabbing and manipulation just allows it to stand out from everything else.  Every episode continues to try to deliver some life lesson or attempt to show the value of a wholesome family environment.  Is it hard to relate because we’re following a multi-million dollar family?  Surprisingly, this might be the most relatable family to hit the TV screen.  We’re along for the ride as Willie tries to cheer his son up after a brief heartbreak as well as tagging along while Willie takes his daughter dress shopping for homecoming.

Ring Around the Redneck is one of the highlights of the season.  After Jase finally purchases a wedding ring to replace the one he lost years before, it’s not 24 hours before he loses the new one.  This is something many spouses or those in long-term relationships can relate to on at least some level; perhaps you’ve never lost a wedding ring, but I’m sure at some point you’ve experienced the terror of losing or breaking something that your loved one held dear.  The bright side is we get to sit back in the comfort of our living room as we watch Jase squirm with panic as he tries to troubleshoot his way out of this mess.

But it’s the Si-amese Twins that managed to get the most laughs out of me.  After Uncle Si finds a security belt fully loaded with a taser and handcuffs, he’s all set to be in charge of Duck Commander security.  Unfortunately for Willie, Uncle Si takes it upon himself to handcuff the two of them together before locating the key to the cuffs.  These scenarios always play out well in the movies, but it’s in “real” life when the fun really gets going, especially when Si can’t stop drinking tea and needs to have Willie pull over for an emergency pee stop.  Scripted or not, it’s hard not to laugh and feel the horror as you imagine what it would be like being cuffed to the crazy family member of your own and how that day could disastrously turn out.

Unfortunately I feel the show jumped the shark a bit by having the Robertson family all get together for a trip to Hawaii.  All I could think about were all the family sit-coms of the 80s when they had the obligatory episode where the gang all goes to Hawaii for more crazy adventures.  It’s like when Saved by the Bell went to Hawaii, anyone else remember that nightmare?  Willie, of course has all his big plans for how the family should spend the vacation, but nothing works out of course, starting with his baggage not arriving as well as his having uncle Si having to share the same hotel room with him. Sure there are still some chuckles to be had, but this just seemed a bit too forced by the producers.

In the end though the show continues to deliver some good laughs and some fun life lessons the entire family can enjoy.  This isn’t the show that could take me away from Breaking Bad or Under the Dome, but it’s still something worth giving a shot when you have some empty space on the DVR or simply want some fun, light entertainment.  For me this is a guilty pleasure that I can’t help but look forward to to see what shenanigans the family gets into next.

Brent Lorentson is a horror writer and film critic based out of Tampa, Florida. With a BA in Digital Film, he co-wrote and co-directed Scavenger Hunt. His short stories have appeared in various horror anthologies. In 2019 his short script Fertile Blood will be a part of the anthology horror film Slumber Party. He is currently working on his first novel A Dark and Secret Place set to be released in late 2019. Favorite Films: Taxi Driver, Fight Club, I Saw the Devil, The Wild Bunch, Dawn of the Dead, A Clockwork Orange, Pulp Fiction, Heathers, The Monster Squad, and High Fidelity.
Girls: The Complete Second Season (Blu-ray) The Dick Van Dyke Show: Season 5 (Blu-ray)