Posted in: Disc Reviews by Gino Sassani on September 11th, 2013 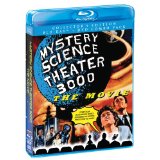 Mystery Science Theatre 3000 is an acquired taste. For me, I’ve really got to be in that certain mood to watch it. The idea is pretty whacked. Depending on the season you’ve got, Joel or Mike is trapped in space on the “Satellite of Love”. Doomed to spend his life watching very bad films, our hero makes the best of a bad situation. He uses his resources to construct a couple of robot pals. Together they watch the films from the front row, constantly riffing on them. If you’re like me, you’ve invited a few friends over to watch a schlock festival. The movies weren’t as important as the banter you created while watching. That’s exactly what you see here. The silhouettes of our host and his robots dominate the lower portion of the screen, where they provide alternative dialog and sometimes witty commentary on the action. The two evil station owners/mad scientists send them a new bad film each week to observe their reactions to the bombs. The films are broken up by off-the-wall skits and fake commercials to alleviate the tedium. The series started as a public access show in Minnesota and was picked up by Comedy Central, where the access quality remained as part of the show’s charm. This is a show you could have produced for the cost of a lunch at McDonald’s and remain on the value meal menu. What would happen if they got Hollywood money and a chance to go big?

The idea started actually while the show was quite young and still just a local phenom. It was the early Joel years, and ideas for a feature film were always flying among the writers. One of the early ideas had robot Crowe reproducing Steve McQueen’s motorcycle stunt from The Great Escape, except this time it was to get to a sunbathing Kim Cattrall. Apparently Cattrall was into the idea, but costs and other factors killed the idea in the…well…idea stage. Other ideas included a musical. None of these ideas got off the ground, and the show continued to plow its television horizons, cultivating a bit of a cult following.

In 1992 the cast and crew thought their time was just about up. In fact they went on for several more years. But at the time they believed it was time to make the feature film jump or go away. Mike was now on the ship. They hooked up with a fan in Universal who managed to get them a modest budget and, of course, a film library to choose from. They picked This Island Earth, and away they went.

Unfortunately, none of the cast and crew look upon the project very fondly. The studio involvement took away much of the freedom that allowed them to be what they were. Their riffs were being questioned and arbitrarily changed by executives who likely hadn’t ever watched the show. The result is what looks great as far as sets and video quality is concerned but never really captured the heart of the show.

The sets are much bigger and more detailed. We get to go to parts of the ship we’d never seen before. The f/x allowed the skits to be bigger, if not funnier. Servo plugs a hull breach with his rear. Crowe’s going stir crazy and trying to dig his way out of the ship. This may have been a holdover idea from the original Great Escape plot elements. The ship crashes into the Hubble and in a cool deleted scene the ship encounters a meteor shower and the guys are huddled in the basement. The best part of the film will always be the improved sets and not the material that played out on them.

One of the best things about the film isn’t really in the film. The menus sport a Country & Western version of the theme song. I found myself letting the menus run to listen to it.

The movie itself is actually not the kind of turkey the gang usually skewered. But it was cut up so badly that important plot elements are lost, and it too lost the charm it once had. This Island Earth is considered a Universal classic by many and not the film I would have picked for the feature film version of MST3K.The entire running time was butchered for both film and MST3K segments so that it ends up only 74 minutes and never feels complete.

The guys learned an important lesson here. It’s nice that Shout has finally offered the film for fans to check out. Most of us missed it. In only played in about 25 screens and pulled in just a little over a million at the limited box office. It unfortunately tainted any chance to get another film. Fans can only be left with a lot of questions and an extra disc to add to their collections.

MST3K: The Movie is presented in its original aspect ratio of 1.85:1. The 1080p image is arrived at with an AVC MPEG-4 codec at an average 30 mbps. I hate to say it, but even looking good the show looks cheap. It’s not really something a high-definition image presentation can save. And I think that’s the point. The focus should never have been on new visuals and toys. The focus should have always been on the characters and their riffing routines. It’s nice to see the guys do a film in widescreen, but overall this is no stunning image.

The DTS-HD Master Audio 5.1 is just as unnecessary. Yeah, they put in a few surrounds, but it’s not what this material needs or deserves. It’s all about the dialog, and that’s all we ever needed.

Making Of: (5:17) This is really a promo piece with some behind-the-scenes stuff intercut with the trailer.

The Motion Picture Odyssey: (33:07) This is quite a frank and honest look back by the crew. They talk about all of the things that went wrong and the overall sour mood during production.

Deleted Scenes: (23:10) Unfortunately, these are in horrid condition. They do give us an idea of the film that might have been.

Sometimes I find myself thinking about seeing the show return in some form or another. Clearly, a feature film is out of the question. That doesn’t mean direct-to-video couldn’t work out. Some of them provide riff tracks to play while watching modern films, but I think the old format would sell direct to DVD. As a motion picture this one just got lost in a very big crowd. “Every year Hollywood makes hundreds of movies. This is one of them.”

Gino Sassani is a member of the Southeastern Film Critic's Association (SEFCA). He is a film and television critic based in Tampa, Florida. He's also the Senior Editor here at Upcomingdiscs. Gino started reviewing films in the early 1990's as a segment of his local television show Focus. He's an award-winning recording artist for Omega Records. Gino is currently working on his 8th album Merchants & Mercenaries. Gino took over Upcomingdiscs Dec 1, 2008. He works out of a home theater he calls The Reel World. Favorite films: The Godfather, The Godfather Part II, The Body Snatcher (Val Lewton film with Karloff and Lugosi, not the pod people film), Unforgiven, Gladiator, The Lion King, Jaws, Son Of Frankenstein, The Good, The Bad And The Ugly, and Monsters, Inc.
Star Trek Into Darkness (Blu-ray 3D) Elementary – The First Season