Posted in: Disc Reviews by William O'Donnell on October 10th, 2013 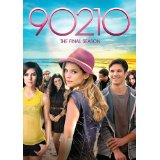 This latest incarnation of “90210” ending in its fifth season means it ran for half the length of the original series (which ran for ten). Like the original, the stories of these sexy Beverley Hills residents began in high school. Now we see the sorts of adults they’ve become and the absolutely ridiculous success they’ve had. They all started on the top, and somehow manage to claw their way…to the top. Yup…real growth here.

What is this “ridiculous Success” I speak of? Oh, how about the fact that amongst the main characters is a successful club owner (which would warrants even more bragging rights since it’s located in California), a software guru (yes, the word “guru” is actually used) and a freaking movie star whose film is #1 at the box office. Incredibly relatable stuff, no?

Just like all the other prime time soap operas, there is a great deal of sexual partner trade offs occurring and gobs of melodrama. Within this season there is hardly a steady relationship to be found (if there was, I sure as heck lost track). Amidst the bedroom rotations, the writer’s also try to pull off a taboo teacher-student relationship story despite the fact that the “student” is that aforementioned movie star and he is no longer an actual student of his paramour (who happens to be a Law Professor in her twenties…so again, SUPER relatable situation).

Just when I thought I had reached the pinnacle of frustration with this show, it decided to hit me at home and do an episode at a comic convention. Thankfully they didn’t have the nerve to pretend that the characters on this show actually are fans of “nerd” culture, but instead treat it as a novelty experience to dress up as Princess Leia (take a WILD guess which costume) or an elf while mocking the scene with a predictable disdain. There is a major sub plot surrounding computers and video game development (remember the “software guru” I mentioned?) but it turns into a predictable story of backstabbing that is overshadowed by a sex tape scandal involving the movie star and his impossibly youthful “teacher.”

The series ties up things the only way it possibly could, with catty feuds resolving and a very random marriage proposal. Melodramatic yet frivolous to the end.

Widescreen 1.78:1. The picture quality leaves a fair amount to be desired. Everything seems much more faded than it ought to be. Dark tones look a little muddy. Browns and blacks blending more than they should in interior shots.

Dolby Digital 5.1 and English Stereo are the options. The sound is not terribly dynamic but acceptable. The music gets some spread on the speakers. There is the slightest bit of muffling on the soundtrack that most wouldn’t pick up on but is present throughout. Could have been spruced up a touch.

Some of the special features are aggravating to find. There is no separate Features listings on the first couple of discs. You have to click on each episode and either said episode will start playing or you will be taken to a hidden menu that contains a particular special feature. It’s as if they made these Features into Easter Eggs, but at the expense of a competent and easy to navigate menu screen.
As well, there is no “play all” option so if you aren’t looking said Features, you will have to click past a few in order to see the show

Audio Commentary with Jessica Stroup, Matt Lanter, Tristan Wilds, Michael Steger, and Scott Weinger: This commentary tracks almost manages to get as frivolous and as flighty as the show itself. Plenty of gossip-esque comments like a tally of how many girls Liam has “made-out with” enter into the conversation. Completely ignorable unless you’re a hopeless fan who can’t get enough of actors who have nothing substantial to say.

Set Tour of Silver’s Apartment: Jessica Stoup offers a tour of her character’s apartment (a studio set). It reveals the little quirks and tricks behind this particular set shoot. It’s brief but more charming than other set tours I’ve witnessed.

Set Tour – Offshore Renovated: Like the previous tour, this is a brief but affable look at a set piece.

Casting 90210: Most of the people have nothing unique to say. Witnessing the actual auditions for some of the roles was interesting to see. Actual audition tapes can be hard to come by. Granted, this one MAY be edited and staged a bit as the auditions here seem much looser and easier than the usual Hollywood grind people have to endure as a young performer.

Script to Screen: A decently in depth look at the various departments and stages an episode goes through in its 7-day (very fast!) production. The focus shines mostly on episode 18 of this season, most likely because it features a ballroom scene that offers a more dynamic look at costume designs/choices for the audience to see develop.

Season in Review – The Last Chapter: This is essentially season commentary on fast forward. A light recap of things you’ve probably already witnessed since you have the DVD set.

90210 4ever Retrospective: A rather lengthy look at the key stories over the show’s entire run. This is the most dedicated feature on the entire set. Very sentimental and I’m sure it will be a genuine delight for fans.

Gag Reel: Is what it is.

For those that are worried that I’m not in on the joke….don’t be concerned, I do understand that there is a satirical undertone to this show. When the character Naomi says lines like “I wish I could…hop onto a private plane and go to Kabo” I get that it is meant to be a crack at the rich Beverly Hills lifestyle.

This series wraps up with a ton of farewell special features for fans to enjoy. Honestly, it couldn’t be a better package for fans to own.

On the Riviera (Blu-ray) “31 Nights Of Terror” Crystal Lake Memories: The Complete History Of Friday The 13th (Blu-ray)