Posted in: Disc Reviews by Jeremy Butler on November 8th, 2013 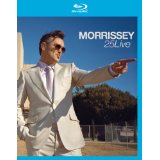 Twenty-five years in any business is a feat to be recognized, especially when it is in the field of entertainment. It requires constant dedication, devotion, and a loyal fan base that sticks by you; Morrissey seems to have all three. In his latest concert series, Morrissey 25 Live, the English singer celebrates his latest career milestone at Hollywood High School in Los Angeles. From the very beginning, it is obvious that the singer has a loving and dedicated fan base, which was the most surprising detail for me given that before this disc, I had never heard of the singer.

The concert begins with testimony from two admitted Morrissey fans, who speak about how his music speaks to them. He appears to have the crowd from the very beginning as they go wild as he comes to the stage. He grabs the microphone, utters “Viva Mexico, I never forget my alma mater,” and the band launches right into the first song, “Alma Matters.” It took me a second to realize what his comment meant given that according to the cover art, the concert took place in Los Angeles (His words are equally confusing given that according to his bio, the singer is English.)

I will say this: Morrissey’s fan truly have an appreciation for him. At different intervals during the concert, Morrissey would send his microphone out into the crowd and all you would hear was them singing his praises; it was an endless stream of how his music has changed their lives and them thanking him for living. Morrissey is without a shadow of doubt loved by his fans.

His music didn’t exactly speak to me; however, the energy coming from the crowd is what propelled me to continue watching, possibly out of a desire and slight envy to feel the way about his music that they clearly do. Throughout the show, the cameras would cut to the crowd, and you would see the crowd singing along or recording with their camera phones. Morrissey is a decent showman. He does a good job of making sure that the show does not get stagnant; he never remains in the same place for too long; staying in constant movement is a great way to keep the show from becoming boring.

The showmanship was there, but the voice wasn’t, at least not for me. It didn’t seem like it suited him; I just noticed inconsistency between when he was talking to the crowd and when he was singing; when he was talking, he had a deeper voice that I thought sounded better and I expected to carry over, but it didn’t really. His singing voice is not terrible; it’s actually fine, but it wasn’t what I expected.

You Have Killed Me

You’re The One for Me Fatty

People Are the Same Everywhere

To Give (The Reason I Live)

Action Is My Middle Name

I’m Throwing My Arms around Paris

Let Me Kiss You

The Boy with the Thorn in His Side

This concert is present in an aspect ratio of 1.85:1. The 1080p image is arrived at with an AVC MPEG-4 codec at an average of 32 mbps. The picture quality is excellent; I must really hand it to the production team this time, there is a plenty of detail. I was actually able to make the individual strands of Morrissey’s hair, the sheen of sweat on the foreheads of members of the band as well as some members of the crowd, but there was a detail that truly stood out to me and seemed so authentic that it stuck with me: the leather guitar strap of the guitarist’s instrument, I noticed it by accident, but the amount of detail I received from this minor prop is what made me realize how detailed everything else was.

Another detail that really popped was the color scheme: the use of gold, blue, and green in the first few songs of the concert, which really helped to bring Morrissey and the band into profile. There was a bit of grain on the faces of the audience during a portion where Morrissey gave his microphone to members of the crowd to receive a bit of praise, not a great detail, simply enough to be slightly noticeable.

The concert comes with two options when it comes to audio; LPCM Stereo or the DTS-HD Master Audio 5.1 track. The stereo is good for the immersive effect and to give that feeling that you are actually at the concert, but only if you have the necessary setup. As far as the DTS-HD audio track, it does its job well, providing the right amount of separation between the instruments and the vocals.

Studio in Session (17:09): Ever wanted to see what it’s like for your favorite artist in the recording studio, recording your favorite songs? Then this feature is for you, as it gives a very detailed look at the process of Morrissey recording his most popular songs: The Kid’s a Looker, Scandinavia, Action is My Middle Name, and People Are the Same Everywhere.

Behind the Scenes At Hollywood High (03:49) A brief feature showing Morrissey and his band before going on stage also equipped with edits of fans outside the auditorium awaiting to be let in. Many of them carry handmade sketches of Morrissey.

Grissle Bandage Presents Lord Mudslide (03:14) Russell Brand makes a surprising appearance, acting as an opening act as well as intro man for the guest of honor and sharing a funny (or what’s supposed to be a funny) anecdote from his past with Morrissey.

Simply put, when you get right down to it honestly, I think I was more impressed with how the crowd responded to him than I was with Morrissey himself.

Jeremy Butler is a film school graduate of the International Academy of Design and Technology. He is been writing for Upcomingdiscs since 2012; however, movies have played a big part of his life for much longer. Favorite genres include horror, science fiction/fantasy, and comedy. Favorite movies are V for Vendetta, Boondocks Saints, Kiss Kiss Bang Bang, and The Godfather.
About Time Thor: The Dark World