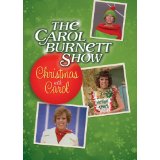 Timeless Media and Star Vista have given us several collections of the show in the last year or two. Now they’ve decided to add a little Christmas cheer to your Carol Burnett collection with The Carol Burnett Show: Christmas With Carol (with some apologies to a certain Mr. Dickens). It’s a single-disc release that contains two of her Christmas episodes. It’s a bit of a surprise to me, but Carol never did do a Christmas special in all of her years of doing specials. This is the next best thing. You get two very complete episodes.

The guest that week was Alan Alda, and he figures into all of the sketches. It starts with Carol’s traditional Q&A session in which Alda arrives to greet a weepy fan.

The Family: Christmas Home For The Holidays:

Of course, this is that series of sketches that led to Mama’s Family. In this one Alda comes home for a holiday visit as Larry, Eunice’s brother. He’s a freelance artist and can’t seem to get any attention from his family who don’t understand how he keeps “losing jobs”. It’s very much like the very first Family sketch with Roddy McDowall.

This is a musical number with Carol and Alda. He’s a department store Santa and she’s a gift wrap girl. They’re both unhappy with their lives and discover each other.

Motion On The Movies:

Carol and Alda play a couple returning from a first date. Carol is very impressed until she turns on the late show to find he’s stolen all of his lines from old movies.

Take Me Back To Manhattan:

This is a musical finale with everyone. It’s a musical medley tribute to New York City.

The guests were singer Helen Reddy and Ken Berry, who would go on to play Vint in Mama’s Family.

Again it starts with a quick Q&A with a cameo from Jonathan Winters who thinks he’s doing his show.

This was another on-going skit with Carol playing a “dumb blond” secretary and Tim Conway playing her boss. She always thought he wanted to make a move on her but that was the last thing on his mind. Here the two share a holiday drink that looks much worse than it is when Conway’s wife shows up.

Helen Reddy is a lonesome rag doll at Christmas time and sings Blue.

Tim Conway intrudes on a couple’s home (Carol & Ken) as a Gestapo-style water inspector. He’s there to find out who has been wasting water. He has ways of making them talk and us laugh.

Ken Berry puts on a song and dance extravaganza.

This 2-part skit spoofs People Magazine and performs skits based on articles in “Person” Magazine. It’s also the musical finale. The pieces star the entire cast.

Carol Burnett brings us the warm Christmas entertainment some of us remember growing up as a kid. It’s the kind of thing you might pop in this holiday season even if the kids do roll their eyes all the way through. If you look closely enough you might just catch them hiding an occasional laugh along the way. “What a wonderful way to start the party.”

Gino Sassani is a member of the Southeastern Film Critic's Association (SEFCA). He is a film and television critic based in Tampa, Florida. He's also the Senior Editor here at Upcomingdiscs. Gino started reviewing films in the early 1990's as a segment of his local television show Focus. He's an award-winning recording artist for Omega Records. Gino is currently working on his 8th album Merchants & Mercenaries. Gino took over Upcomingdiscs Dec 1, 2008. He works out of a home theater he calls The Reel World. Favorite films: The Godfather, The Godfather Part II, The Body Snatcher (Val Lewton film with Karloff and Lugosi, not the pod people film), Unforgiven, Gladiator, The Lion King, Jaws, Son Of Frankenstein, The Good, The Bad And The Ugly, and Monsters, Inc.
Dora’s Christmas Carol Adventure Man of Steel (Blu-ray)