Posted in: Disc Reviews by Jeremy Butler on January 13th, 2014 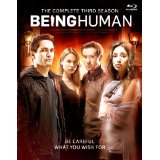 “Getting what you want comes with a price.”

Much has changed in the world of Being Human this season. However, let’s recap for a moment just to make sure everyone is on the same page. Sally (Meaghan Rath), after shredding her own spirit to get to limbo so she can rescue Scottie and Nick, has bitten off more than she can chew as she finds herself stranded in limbo with the very people she sent to limbo. Aidan (Sam Witwer), after losing his lover Suren and his failed attempt to assassinate her murderer, the vampire matriarch known as “Mother”, is buried alive for his transgression. As for Josh (Sam Huntington), after deciding to kill his maker Ray before the full moon in order to free him and Nora (Kristen Hager) from the curse inflicted on the both of them, finds himself in a standoff that includes Ray, Nora, and himself.

Now that everyone is on the same page, let’s talk about what’s going on this season. Sally is still trapped in limbo with Scottie and Nick, searching for a way out with no luck so far. Despite that, she remains unwavered from her course of action, believing that every time she reaches the brownstone door that either Aidan or Josh will be on the other side of it, ready to open it for her. Aidan is still in the ground, the prolonged exposure underground and lack of oxygen have caused him to start hallucinating, and he becomes unable to differentiate reality from the hallucinations. Josh, on the other hand, has fared mildly better than the others; his showdown with Ray results in blood on his hands; however, he has received the reward he so desperately wanted: he’s human again; however, the same can’t be said of Nora.

By the conclusion of the first episode, the trio has been reunited, but their world is still not yet the same, and new struggles have surfaced. The vampire population has been desolated by a mysterious epidemic that has no cure and left their food source, humans, infected, and consuming tainted blood is a death sentence to the immortals. Aidan has been freed from his underground prison; however, he finds himself in a whole new prison, one where his thirst is unquenchable.

Sally has found a measure of happiness with the renewed life that Josh and Nora secured for her through the use of blood magic courtesy of witch Donna (Amy Aquino, Brothers and Sisters), however she soon realizes that this new life carries a hefty cost, and the witch that she trusted turns out to have had her own agenda for bringing Sally back from the very beginning.

Even Josh and Nora’s blissful lives are upended by the appearance of Liam McLean (Xander Berkeley, Nikita), father of Connor and Brynn McLean. Liam has discovered that his son has been murdered and his daughter is missing and has sworn vengeance on the person responsible for the death of his son and to find out what happened to his daughter. For those not in the know, and if you are watching the third season I assume you are, Liam’s vow means bad things for Aidan for his hand in Connor’s demise, and as for Brynn, the truth behind her disappearance could mean very bad things for another member of the core four.

This season was offered good resolutions from last season’s cliffhangers and a jaw-dropping change in circumstances. The reveal that the vampire population faces new hardships was an unexpected and pleasant change in circumstance given that since the show’s inception the vampires have been the top of the food chain (pun intended); now the hunters are the hunted, and the idea of using a plague-like epidemic that only affects the undead was a stroke of genius in my opinion. I have enjoyed the regime change with the werewolves stepping up to be the dominant force now that the vampire ranks are no longer in a position to challenge. However, the best change in circumstance involves dear sweet Sally; the return to life was the icing-on-the-cake reveal.

However, one truth was absolute; things could not remain his way; that reality I knew from the beginning. The fun was seeing how everything was going to unfold back to the reality that we had become used to, and it did not disappoint. The most intriguing and possibly heartbreaking storyline was probably Josh’s, because he finally had everything that was taken from him that fateful night returned: he was human again, he again was in love, and he was no longer subjected to the mopping of urine as he now wore the same proud title that Aidan and Nora wore: nurse.

And it wouldn’t be the Being Human season finale if it didn’t end on a cliffhanger. Now, I won’t give too much away on this season cliffhanger; however, I will mention that there are some moments that happen that I was not expecting such as the return of a character who was featured quite a bit this season that will have you saying, “Is that who I think it is? No, it can’t be.” I will also tell you that the wait to see what happens is not that far off, as season four of Being Human begins Monday, January 13, 2014.

Each episode of Being Human is presented in the aspect ratio 1.78:1. The 1080p image arrived at with an AVC MPEG-4 codec. The color scheme for the series appears a bit muted with the exception of blood, which is a prominent feature on the show; the red of the blood does pop. The high-definition image is very clear, though sharpness could be better. The picture does display sharpest in the close-up facial shots,particularly the beards of the main characters, specifically Xander Berkeley’s. There are minute levels of grain, most prominent during flashback sequences. Here the grain intentionally offers great contrast from the reality of present day and makes differentiating the two extremely easy.

Being Human’s DTS-HD Master Audio 5.1 track is a great addition to the production. There was not much of an immersive experience; however, the sound was pretty well spread especially during the action sequences. The dialog is clear and discernible, and both the dialog and score complement each other well, displaying how well the two were mixed.

Behind The Scenes: (47:34) “Careful what you wish for.” An in-depth look at actors as they return for the first day of shooting season three as well as the return of a popular character, Mark Pellegrino. The actors give their interpretation of the theme of this season and what will be happening with their characters in that season; it doesn’t really shed light on the coming season, but still a fun feature.

Being Human 2013 San Diego Comic Con Panel: (49:22) the full panel from Comic Con in San Diego featuring the show runner as well as all four members of the core four. During the panel, the cast cracks jokes and answers questions on what to expect this upcoming season and where their characters left off last season.

The Cast on Cliffhangers: (01:32) The cast discusses last season’s cliffhangers and what they could mean for this coming season without giving anything away. Basically playing dumb to raise the ire of the audience; luckily the wait to see what happens is almost over.

Bloopers: (02:40) Always an entertaining feature to have. Brief but still worth watching, because it shows us that despite the characters they play, like the title of show says, the actors are just human.

Monday January 13, 2014, Being Human returns. I know I will be watching to see what happens; will you?

Jeremy Butler is a film school graduate of the International Academy of Design and Technology. He is been writing for Upcomingdiscs since 2012; however, movies have played a big part of his life for much longer. Favorite genres include horror, science fiction/fantasy, and comedy. Favorite movies are V for Vendetta, Boondocks Saints, Kiss Kiss Bang Bang, and The Godfather.
Big Ass Spider! (Blu-Ray) 12 Disasters