Posted in: No Huddle by Archive Authors on February 11th, 2014 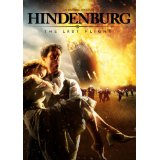 With so many potential “crash and burn” puns, both good and bad, to describe Hindenburg: The Last Flight, I’m sure you’ll pardon me for ignoring them all—I wouldn’t want to waste good material on this little spot of cinematic rubbish. Suffice to say, the final product from this piece of historical fiction is truly inspired, as in “epic disaster.”

Imagine, if you will, Titanic was a poorly-dubbed B-movie, watered down in every sense of the word (minus the actual water). Instead of Leo, we have Maximilian Simonischek, who’s still quite handsome and no-doubt charming in his native German. Lauren Lee Smith replaces Kate Winslet, and, while relatively unknown, isn’t much of a downgrade. Instead of James Cameron, we get director Philipp Kadelbach and writer Johannes W. Betz, upon whose talents I might better expound if I spoke German.

Nevertheless, we meet Merten Kröger (Simonischek), zeppelin designer and novice pilot as he’s about to take off on his first glider flight. It goes well, except for that flock of birds that causes him to crash and miss the picnic with pal Alfred Sauter (Hinnerk Schonemann). Fortunately, Merten is saved by the mysterious, hot Jennifer (Smith), who disappears before he can properly thank her.

Merten finds out later that evening, at an event thrown by the Zeppelin Company to court the purchase of safe, non-flammable helium from the American Oil Company, that she is Jennifer Van Zandt, daughter to Edward Van Zandt of American Oil. Small world. Edward, who wasn’t able to make it, Jennifer and mother Helen (Greta Scacchi) plan to make the trip home on the Hindenburg the very next day.

Pops is none too pleased to learn this, because he’s part of a plot to blow the damned thing up. But word fails to reach his family in time, and now it’s up to Merten to figure out the conspiracy and hopefully stop the bomb. And just how high does this conspiracy reach?

The famed rigid airship fares about as well as this movie, the producers of which chose to dub even the parts spoken in English. Perhaps they were going for continuity in quality, but it’s really kind of infuriating distracting to notice a sync problem when you can read the actors’ lips.

In scope and intent, the film makes a noble effort. Historical drama isn’t the easiest thing to pull off, is it, Michael Bay? Injecting conspiracy into historical mystery can turn out great, like Hollywoodland, but not even Brian De Palma can guarantee a sure thing, evidenced by The Black Dahlia.

This sinking ship comes courtesy of Anchor Bay Entertainment, whose previous straight-to-home-media offerings include charming and enjoyable (if not award winning) low-budget flicks like Stan Helsing and Operation: Endgame, serving to prove you can’t win ‘em all. Suffice to say, Hindenburg: The Last Flight is a disaster.