Posted in: No Huddle by Brent Lorentson on February 20th, 2014 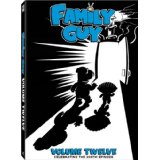 You know a show is kind of a big deal when it reaches the 200-episode mark. Seth MacFarlane has more than just made his mark on the television landscape with Family Guy, American Dad and The Cleveland Show; he’s made a name for himself as a modern icon of pop culture. MacFarlane has led the Griffin family through 200 episodes of raunchy humor while sneaking in a message or two between the jokes and gags.

As Fox releases Family Guy: Volume 12 on DVD, it’s surprising to see how far the show has come, where only The Simpsons and South Park have managed to hang around longer. But the longevity of these shows isn’t always a sign of greatness. After all, many would argue The Simpsons has lost its stride for years. But since 1999 — when Family Guy first hit the airwaves — to the show’s credit, it has never been afraid to challenge topical subjects that many would deem inappropriate or simply vulgar. Whether it’s characters dabbling in the meth trade to make ends meet on a farm, or characters simply dealing with getting old, MacFarlane and his team of writers continue to produce a show and deliver a moral message despite how muddled it may be in its delivery.

One of the highlights of volume 12 happens to be “Yug Ylimaf” the 200th episode that follows Brian and Stewie (considering this is volume 12, I take it by now you know Brian is the dog and Stewie is the foul-mouthed talking baby) as they struggle to fix a time machine that has caused the world around them to travel in reverse. Though it’s a little Benjamin Button-esque with the premise, don’t be fooled: this is filled with high points throughout. As the episode plays out, we see Brian and Stewie revisit some famous moments throughout the show, everything from a battle between Peter and The Chicken to “the vomit scene.” “Yug Ylimaf” hits all the right notes, making it a near-perfect episode.

In “The Giggity Wife”, Quagmire wakes up from a crazy night of partying with the guys and discovers he’s now married to a prostitute. Quagmire is willing to jump through any hoop to have the marriage end, so much so that he enlists Peter to go above and beyond the barriers of friendship to help him out. The episode may be a bit over the top for some to handle, but I appreciate that the show pushed the envelope on this one and ended up with one of the more amusing, cringe-worthy moments of the show.

Not every episode is as strong though, but I have to say this volume does deliver more hits than misses than previous collections. In “Bigfat”, we see Peter getting lost in the woods only to be discovered much later when he has reverted to being a Wildman of the wilderness. As a cutaway bit, this would have worked, but the episode simply seemed to struggle for me. To the show’s credit, even when the episodes are weaker than others, it still manages to entertain and pull a few chuckles out of me.

In the end, whether it’s seeing the show take a stab at 12 Angry Men or simply having Brian and Stewie explore space and time with Stewie’s machine, Family Guy continues to deliver fresh episodes that can bring more than just a few chuckles from its audience. Family Guy doesn’t have anything to prove to me. I feel it’s one of the best comedies on TV, and the fact that it’s animated doesn’t bother me a bit. I can get behind a show that is willing to push its audience, to watch its characters endure situations that may embarrass, enrage, or simply delight us in the real world. Family Guy is escapist television of the highest standard, and here’s hoping it still has another 200 episodes left for us.

Brent Lorentson is a horror writer and film critic based out of Tampa, Florida. With a BA in Digital Film, he co-wrote and co-directed Scavenger Hunt. His short stories have appeared in various horror anthologies. In 2019 his short script Fertile Blood will be a part of the anthology horror film Slumber Party. He is currently working on his first novel A Dark and Secret Place set to be released in late 2019. Favorite Films: Taxi Driver, Fight Club, I Saw the Devil, The Wild Bunch, Dawn of the Dead, A Clockwork Orange, Pulp Fiction, Heathers, The Monster Squad, and High Fidelity.
Sorority Party Massacre Game of Thrones: The Complete Third Season (Blu-ray)