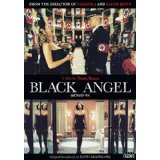 Tinto Brass is a dirty old man, but I’ll get to that later. Tinto Brass directed the film Black Angel in 2002 (when it was called Senso 45), and it is now getting a DVD release. It is an adaptation of the novella Senso, written by Camillo Boito, which was previously filmed by Luchino Visconti. This version takes place in Fascist Italy in 1945. Fascism had been growing in Italy under Benito Mussolini since the early part of the 20th century. It influenced and eventually became intertwined with German Nazism until their mutual destruction in 1945 with the deaths of Hitler and Mussolini within days of each other at the end of April of 1945. Whatever their goals were at the start, they both devolved into depravity and insanity. The goal of Fascism was the subjugation of the individual for the good of the collective state. It was a reaction to Marxism but also merged with the philosophies of Capitalism. It is generally believed that the philosophies of Fascism were further perverted by the opportunistic desires of Mussolini. Domination of the individual was essential to the growth of the totalitarianism of Nazi Germany and Fascist Italy, and that power over the individual corrupts the soul. This leads to the decadent domination of individuals for any purpose.

Tinto Brass is best known for the film Caligula, but he took his name off the film when Penthouse’s Bob Guccione took over and inserted hardcore sex scenes and generally botched the editing. Brass’s career began when he started working for Federico Fellini and Roberto Rossellini and made hist first solo film in 1963. Ironically, Brass turned to erotica after Caligula because of a subversive desire to undermine censorship of any kind. One of Brass’s first major successes was Salon Kitty with Ingrid Thulin and Helmut Berger which has many thematic similarities to Black Angel. They both deal with an ambiguous and amoral Nazi officer. He is clearly influenced by his mentor Rossellini and especially his film Open City. Brass says as much in an interview included in the DVD extras. But Brass never reaches the sublime levels of complexity of his masters Fellini, Visconti or Rossellini. He has settled for pushing the limits of soft core into a higher level. Brass clearly is obsessed with the sexual aspects of what is a very good story. He is so obsessed that he has focused on many of his fetishes above all else. There is some pleasure to be had from this, and it clearly appeals to an audience of adult films, but it is also prurient and indulgent. Another famous film, The Night Porter, dealt with the bizarre sexual obsession between a Nazi officer and his lover with more compelling ambiguity than Black Angel.

The original story of the novella and the Visconti film takes place in 1866 during the end of the Italian-Austrian war of unification. The change in time and place made sense for Brass since Visconti had strayed so far from the original story, but Brass didn’t feel he could compete with Visconti’s depiction of that earlier era, either. It makes sense for the viewer, too, since Brass clearly has an affinity for the pervasive display of depravity and debauchery that occurred in the final months of World War II. The location was also moved to Venice and much is made of the evocative local.

Anna Galiena (Countess Livia Mazzoni) is the center of the film and is ably matched by Gabriel Garko (Lieutenant Helmut Schultz). It is their insane and passionate affair that drives the film. Galiena is best known for Jamon Jamon, The Hairdresser’s Husband, Senza Pelle and the English language film, Fade to Black. Galiena is vibrant and riveting in a demanding role and the best reason to see Black Angel. Another good reason is the beautiful score by legendary composer Ennio Morricone.

But, as I said before, Tinto Brass is a dirty old man. He clearly revels in depicting debauchery and degradation. It fits the story, but that’s clearly why he was drawn to the material. Like Caligula and Salon Kitty, Black Angel fits into Brass’s obsessions. It would be hard to say, though, that anyone wouldn’t be overcome with a voyeur’s delight in the spectacle. I, for one, will admit to enjoying indulging in this man’s obsessions.