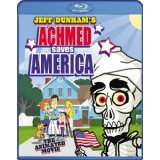 Jeff Dunham has always had a talent for making people laugh. His style of ventriloquism has found its way into millions of homes and probably a billion YouTube views. Of course these standup specials have translated into tons of merchandising potential such as lunchboxes, t-shirts, and even the puppets turned into cute and sometimes furry stuffed dolls. Well, with one of the most beloved characters, Achmed, they decided to do an animated special. Let us see how well it turned out.

Jeff Dunham and Achmed the Dead Terrorist (also voiced by Jeff) join us for a little introduction. Jeff asks Achmed who his favorite animated character is. Achmed sheepishly replies Tigger and also Eeyore. But certainly not Piglet, don’t be ridiculous. Then Jeff tells Achmed that he can be an animated character too and to make a wish. Out pops Tinker Bubba (yes, that’s Jeff too) who can make Achmed intoxicated, I mean animated. Achmed turns animated and that is how the show starts.

Somewhere in the Middle East, Achmed the Live Terrorist (not dead just yet) is riding to his destination for his and hopefully other’s doom. He stops when he gets a phone call from his boss, Hassan (voiced by Andre Sogliuzzo) who asks a very simple question, “Why have you not gone boom yet?” Achmed has certain plans to go boom yet, he has to get into position first though. In the bomb is ready to go and then Achmed accidentally arms it. That can’t be good. *BOOM*

Achmed and the fragments of the bomb end up in another part of the desert. But Achmed is no longer the live terrorist, he is instead a very dead one. Well, he is alive but he is a skeleton, so you figure it out. About this time, Achmed is picked up by a giant bird and then after complaining some, he is dropped by the giant bird. This sends him plunging towards the ground but then he is hit by a plane. A plane that is going straight to America. *cue montage of Achmed flying into various American landmarks*

Achmed actually lands in America, or Americanville to be more exact. He writes in his diary about what America looks like and then about that time, he gets run over by a mini-van. The mini-van is being driven by the Wilson family (well just one of them but the rest are riding). The Wilson Family is father Wayne (voiced by Tom Kenny), mother Jenny (voiced by Susan Egan), daughter Cassidy (voiced by Amanda Troop) and son Kevin (voiced by Chiara Zanni).

The Wilson Family actually mistakes Achmed for their foreign exchange student, Claude and decide to take him home. (But stop by the local buffet joint first for some food and skeleton humor). As it turns out, tomorrow is the town’s 100th year celebration and lots of festivities are planned. Of course, the family is behind much of the organization and Achmed realizes this might be the perfect opportunity to extract revenge by making another bomb go boom.

Later that night, Achmed, his bomb and his hypo-allergenic pillow are about to go to sleep when Kevin decides to tell Achmed about his real passion, ventriloquism. He even introduces Achmed to his own puppet. I wonder if that counts as breaking the fourth wall (since Jeff Dunham is famous for his own puppetry). Kevin leaves and Cassidy comes in through the window and shortly there-after proclaims Achmed as her new boyfriend. After a Walton-style goodnight reference, the new day unfolds. Will Achmed succeed and put the town (and everything in a 20 mile radius) to sleep with the fishes?

Does anybody remember the short-lived Jeff Dunham show? Yeah, it lasted seven episodes and trust me when I say this, it was not funny. Achmed saves America is certainly not that bad, and it does manage to get a few laughs. The voice cast is talented enough too with Tom Kenny at the helm and Jeff practically fills in any gap with tons of random voices at his disposal. The references are pretty good too from Wiley E. Coyote to E.T. and at least a dozen more.

But at the end of the day, the writing falls a bit flat. The jokes are not that funny (well except that eye-patch sniper joke, that one killed me) and it all feels a touch on the political side which is where an animated feature should almost never go. Actually, to be bluntly honest, it felt like I was watching an episode of American Dad. For the record, I can’t stand that show either, well except for the alien. But much like that show, the only saving grace is what Achmed does from scene to scene.

The video is in 1.78:1 widescreen at 1080P. The animation as the commentary puts it feels like it is straight out of Mad Magazine. That’s a bad and good thing as it does fit the mood, but the animation is not exactly cutting edge. It serves the purpose and the colors are pretty good for what is represented. The problem is that it just feels very basic and is pretty rudimentary.

The audio is presented in 5.1 English Dolby True HD(English 2.0 mix also included). Dialog is clear and the voices all sound very good. There is no drop out and the sound effects are about as canned as a Road Runner cartoon (yes I can use references from the movie). It will not give your speakers any workout but again, it does the job. English SDH Subtitles also included.

Another interesting note from the commentary is that this will also be placed on Comedy Central at some point. That means they will have to turn a sixty minute show into a forty two minute one. The show is not that great, but slicing and dicing it into forty two minutes is still going to be hard and you have to wonder what exactly will be sacrificed in the process. *bad joke coming in 1-2-3*…it surely won’t be any funny jokes. Okay, that’s not completely true, but there are few laughs here.

The blu-ray does have pretty decent video and audio but the special features only redeeming quality is the decent audio commentary. At least this show is budget priced at an Amazon or *insert name of local video store* near you. Jeff Dunham fans will probably eat this up, but most people should probably leave it alone. Hopefully, the next time I see Jeff is in another standup feature not a side project.

Michael Durr has been reviewing movies for the better part of fifteen years now. He primarily enjoys thrillers, sci-fi, animation and even a little courtroom drama. His favorite films include Escape from New York, the Goonies and anything with Alyssa Milano. When he’s not praising Kurt Russell as the greatest actor of our time or scratching his head over a David Lynch flick, he’s spending time at home in Texas with his lovely wife, Lori and his amazing son. How they put up with him is a mystery, but even Basil Rathbone doesn’t have the time to solve that one.
Flashpoint: The Final Season Swerve (Blu-ray)