Dora the Explorer: Dora in Wonderland 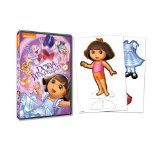 This tale shares similarities to the original book in settings and character names only. There is no menace facing Dora, only animals that are politely asked to move aside. Aside from stretching things out to a longer length with some additional story, and a few musical numbers, this special would seamlessly fit amongst other Dora episodes for it contains none of the psychedelic spirit found in Carroll’s original story. Fans will not be turned off by it whatsoever (and by fans I mean children around the age of 2) and parents can rely on it for 55 minutes of distraction.
This particular DVD comes with a Dora paper-doll that your youngling can smear crayon all over and eventually lose a week after playing with it.