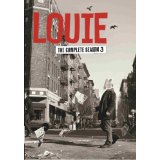 “I got kids and I work, and it’s hard sometimes. But, you know, boilerplate misery…alone in the world…might as well be a maggot sucking a dead cat’s face. What’s the point?”

That’s how Louis C.K. describes his life during a season 3 episode of Louie. And since the FX comedy series — that is only nominally a comedy series — stubbornly and brilliantly defies any sort of easy categorization, the sad-sack declaration is also the best description you’re likely to get of what the show is about.

“Have you ever had any experience with being funny?”

More often than not, this is the part where I write a paragraph or two summarizing what the movie or TV show I’m reviewing is about. However, the thrill of tuning in to Louie each week — as I’ve done since the show premiered in the summer of 2010 — is that you never truly know what you’re going to get. (The unhelpful synopses for Louie episodes typically say things like “Louie remembers his past” or “Louie meets a friend.”) The only person who appears in every episode is Louis C.K., the standup comedian who stars, writes, directs, and edits the show. Early on, he seemed to treat the idea of continuity more as a suggestion than a hard-and-fast rule of television. While this sort of week-to-week experimentation is exhilarating for some viewers, it can also be disorienting and off-putting to others who expect cozy familiarity from their television. (Think about it: we spend about two hours at the movies, but TV characters can live in our home for up to 10 years.)

Not surprisingly, the show has evolved over time. The first two seasons were mostly comprised of stand-alone episodes that had little to do with one another. Heck, sometimes an episode contained two or three different vignettes that had nothing to do with each other. On the other hand, the just-concluded fourth season featured a six-part arc/mini movie that aired over the course of four weeks, as well as a 90-minute episode that mostly starred a junior high school version of Louie…and Jeremy Renner.

Season 3 is an affecting, darkly funny mash-up of both those versions of Louie. The show still offered up episodes with disparate storylines. For example, Ep. 7/“IKEA/Piano Lesson” featured Louie making a tense visit to the furniture store during its first half, and trying to reconcile with fellow comic Marc Maron toward the end. However, the show also indulged in a couple of multi-week arcs for the first time. These episodes — Eps. 4-5/“Daddy’s Girlfriend Parts 1 & 2,” and Eps. 10-12/“Late Show Parts 1, 2 & 3” — didn’t just foreshadow the multi-part arcs of season 4; they also happen to be among the finest material Louie has produced.

Louis C.K. stars as “himself” on the show. In real-life, he has become one of the most successful and acclaimed stand-up comics on the planet. In Louie, he’s still a talented, hard-working (albeit not nearly as successful) comedian, but the show also focuses on his life as a divorced dad who deals with a variety of anxieties. These anxieties include feeling isolated, pushing through his inhibitions and passiveness, and feeling totally bewildered by women. Louis C.K. tells his stories using a tone that is equal parts surreal, French New Wave, and Woody Allen. (Which is why it wasn’t surprising that Susan E. Morse —Allen’s long-time editor — worked on season 3, marking the first time Louie ceded editing duties on Louie.)

“Daddy’s Girlfriend” is a lovely, intoxicating showcase for each of those tones. It’s also highlighted by a wonderful performance from guest star Parker Posey, who is mischievous, infectious, sexy, and unstable as the title character. And if you want to talk “surreal,” I suppose it makes perfect sense that Blue Velvet/Mulholland Drive director David Lynch(!) guest stars as a talk show guru in “Late Night.” That particular storyline has Louie training to become David Letterman’s talk show host replacement at CBS, which is impressive considering these episodes aired almost two years before Letterman announced his real-life retirement. It’s a bizarre, moving, Rocky-style story that has Louie tapping into his ambition.

My favorite standalone episode was “Ep. 3/“Miami.” It starts off with Louie visiting the titular city for a gig before evolving into an exploration of how weird and difficult it is for a single adult male to befriend another single adult male. (In addition to Miami, season 3 of Louie also filmed scenes in Boston and Beijing, making it the show’s most ambitious production yet.) Other than “Miami” and the multi-part installments, I tended to enjoy moments or vignettes more than I did episodes as a whole.

For example, I loved watching Louie frantically perform complex surgery on a doll while trying to salvage a Christmas present for his daughters. Speaking of his daughters, pretty much any scene with Louie’s younger daughter Jane (Ursula Parker) cracks me up. (I especially enjoyed her off-beat delivery in Ep. 2/“Telling Jokes/Set Up.”) On the other hand, some segments — like the “IKEA” trip and the stretch where Louie gets stuck babysitting a troublesome pest named “Never” — are simply unpleasant to watch. (I realize that may have been the intent, but I just didn’t find them to be compelling TV.)

Guest stars in season 3 included Jerry Seinfeld, Jay Leno, Chris Rock and Robin Williams as themselves. Unfortunately, you can sort of feel Louie not wanting to lean too much on his famous friends, so most of those appearances fall flat. The exceptions are a surprising, creative use of Williams and (especially) Leno during a brief phone conversation with Louie that blurs the line between reality and fiction. Leno bemoans not being the “hip comic” after accepting the grind of hosting a late night talk show and advises Louie to pass on the Letterman gig. There’s also Melissa Leo, who won a Guest Actress Emmy for her outrageous performance in “Telling Lies/Set-Up.”

The Louie: Season 3 DVD set includes all 13 episodes on two discs. Unfortunately, this is the first home video release of the show that’s not available on Blu-ray. Even worse, there are no special features at all in this collection. (In previous sets, Louie provided fantastically insightful commentary on virtually every episode.) I realize the show dropped off the radar while Louis C.K. pursued other projects — including roles in American Hustle and Blue Jasmine last year — but this bare bones set is still a disappointment.

For me, season 3 represented the best of both of Louie’s worlds. I just wish the home video release matched the quality of the show. Louis C.K.’s deal with FX is similar to the one Curb Your Enthusiasm star/creator Larry David has with HBO: the show doesn’t adhere to any sort of network schedule, so he can basically make a new season whenever he feels like it. Here’s hoping Louie “feels like it” sooner rather than later. “Congratulations to you. You are officially great.”