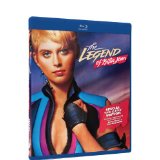 “Don’t you ever get tired of vanilla?”

There’s a special breed of ’80s movie that appears hopelessly dated on the surface yet remains impulsively watchable. (Insert your own, “So you mean *every* ’80s movie?!” joke.) The Legend of Billie Jean — with its hilarious-in-hindsight fashion and Pat Benatar theme song — certainly fits the “trapped in the ’80s” bill. However, the 1985 film — now making its Blu-ray debut courtesy of Mill Creek Entertainment — still manages to entertain by tapping into the timeless spirit of teenage rebellion.

Billie Jean Davy (Helen Slater) is the hottest girl in Corpus Christi, Tex. Even younger brother Binx (Christian Slater, no relation to his co-star) seems in awe of her prettiness. During an outing at a local lake, town bully/typical 80s movie jerk Hubie Pyatt (Barry Tubb) steals Binx’s Honda Elite scooter. (I guess I should’ve mentioned The Legend of Billie Jean actually opens with a fawning hero shot of Binx’s scooter that may have actually been funny on purpose.) Billie Jean and her two best friends, Ophelia (Martha Gehman) and Putter (Yeardley Smith), go to the police to try and get the scooter back. Unfortunately, they are lightly brushed away by the dismissive Detective Ringwald (Peter Coyote). Meanwhile, Binx had gone to retrieve the scooter himself; he returns bloodied and beaten, and with his beloved scooter trashed.

To set things right, Billie Jean, Binx and Ophelia visit Hubie’s dad’s shop. Billie Jean demands they cough up the $608 to cover the repair of Binx’s scooter. Instead, Mr. Pyatt (Richard Bradford) attempts to proposition (and subsequently) rape Billie Jean, which leads to Mr. Pyatt getting shot and Billie Jean, Binx and their friends on the run from the police. As they dodge the authorities, Billie Jean and Co. pick up a willing hostage in bored rich kid Lloyd (Keith Gordon) and seize control of the way they’re being portrayed in the media. By repeatedly insisting that Mr. Pyatt simply pay the $608 to fix Binx’s scooter, Billie Jean turns “Fair is Fair” into an anti-establishment mantra and becomes an instant outlaw/icon.

It should be noted this is a completely ridiculous movie, and that the ridiculousness goes beyond the fashion choices and the dodgy Texas accents. At first glance, Billie Jean seems like she should fit snugly alongside other titular 80s rebels like the one in Ferris Bueller’s Day Off, which was released a year later. But whereas Ferris Bueller is a relatively light concoction, you’ll find some truly serious themes in this film; in addition to the aforementioned attempted rape, there’s a scene where Billie Jean helps a little boy who is being abused by his father. Those darker thematic elements mean this film is probably closer in spirit to some of the great anti-establishment films from a decade before. (Think Dog Day Afternoon or One Flew Over the Cuckoo’s Nest.)

Of course, The Legend of Billie Jean doesn’t exactly belong in the same sentence with those two classics. (Which is why I’ve started a new paragraph over here.) Director Matthew Robbins (Dragonslayer and *batteries not included) made a film that seems to have been heavily influenced by the explosion of MTV at the time. As a result, some of the movie’s comedic, teen-friendly beats clash badly with more serious moments. A perfect encapsulation comes during the scene where a random citizen spots Billie Jean driving around, pulls out a rifle, and kicks off a car chase. The sequence ends with the pursuer’s truck flipped upside down  and Putter covered in blood; but instead of having been shot, Putter realizes she got her first period before deadpanning, “When do I get a diaphragm?”

But despite these weird tonal shifts, The Legend of Billie Jean manages to work as a piece of pure entertainment. It probably helps that Helen Slater — who had only made one film, the box-office bomb Supergirl — was pretty easy on the eyes. (Moreso after Billie Jean chops off her hair and brings the actress’s striking features into sharper focus.) Slater’s performance as Billie Jean isn’t what anyone would call award worthy, but the actress has a star quality that makes you buy her as someone who could capture the general public’s imagination. This movie also marked the feature film debut of Christian Slater, who was 15 years old at the time the film was released. He appears scrawny and unnaturally blond here, but The Legend of Billie Jean ended up foreshadowing the rebels he’d play in subsequent movies like 1988’s Heathers and 1990’s Pump Up the Volume.

Bradford is effectively slimy as Mr. Pyatt, while Coyote easily gives the most grounded (and most relatable) performance as the conflicted Det. Ringwald. Gordon, who went on to a nice career directing movies like Waking the Dead and episodes of Dexter and The Bridge, is another welcome, easy-going presence as Lloyd. On the other hand, Smith — the future Lisa Simpson — is like an annoying proto-Renee Zellweger because many of Putter’s attempts at comic relief wind up feeling forced.

Robbins keeps the 95-minute film moving a brisk pace and the script by Mark Rosenthal and Lawrence Konner nicely pays off the Joan of Arc reference it introduces halfway through.

The Legend of Billie Jean: Special “Fair is Fair” Edition is presented in an aspect ratio of 1.78:1. The 1080p image is arrived at with an AVC MPEG-4 codec at an average of 24 mbps. Much of the film takes place in the bright Texas sun, so the image largely takes on a slightly overexposed appearance that seems to be the original intent of cinematographer Jeffrey Kimball. (Who went on to shoot a little movie called Top Gun the following year.) The presentation retains a clarity and texture that shows little (if any) signs of DNR. Black levels are a bit troublesome during darkened scenes, but those are very few and far between. This isn’t an eye-popping presentation by any means — it looks to be about a step and a half above DVD quality — but it’s nonetheless pleasing and faithful to its time period.

The Dolby Digital 2.0 track is disappointingly puny. Dialogue comes through clearly enough, despite sounding slightly hollow at times. The biggest letdown comes during what should be propulsive musical moments. (In addition to Pat Benatar’s “Invincible”, Billy Idol’s “Rebel Yell” makes a key appearance.) But instead of a “Rebel Yell”, this track is more like a “Rebel Whimper.”

Commentary with stars Helen Slater and Yeardley Smith: The bad news is the only special feature is ported over from a 2011 DVD release. The good news is at least we get a bit of bonus material, which isn’t always a given with a catalog title making its Blu-ray debut. The better news is this commentary track is pretty entertaining.

It was smart to pair Slater with Smith because the actresses help each other remember details from a movie they’d made 25 years earlier. (Smith is also adept at subtly and gently driving the conversation.) The pair make fun of their bad accents, recall filming in the blistering Texas heat, and point out amusing production details, like the parts where Slater is wearing a wig to cover up her shorn hair.

Before launching into “Invincible” at her concerts, Pat Benatar apparently introduces it as the song from “the worst movie ever made.” I have to respectfully disagree.

The Legend of Billie Jean didn’t come close to living up to its lofty title, but it has achieved guilty pleasure status among a rabid group of supporters. The Blu-ray looks pretty good, sounds pretty bad, but still represents a solid reason to check out this overlooked 80s trifle.