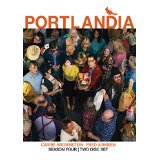 Oregon may have been the 33rd state to join our union — and Portland may be its most populous city — but Portlandia is a (beet-eating, Bigot Parade-hosting, 3D printer-buying) state of mind. And four seasons into lovingly mocking upper middle class indulgence along with the denizens of the Pacific Northwest, the show — created by stars Fred Armisen, Carrie Brownstein and director Jonathan Krisel — continues to feel more like a fully-realized destination than ever.

Armisen actually picked up a Best Supporting Actor Emmy nomination for his work this season. It was great for the show because it marked Portlandia‘s first nod in a major category, but it was also strange to see him slotted into the “Supporting” race given that he and Brownstein appear in almost every scene of every episode. Armisen keeps on finding genuine shades of weirdness in every character he plays, but I continue to be impressed by Brownstein’s work as a comedic actress. (The former Sleater-Kinney singer/guitarist isn’t an actress by trade.) Her subtler goofiness is a great match for — and no less funny than — what Armisen does.

Anyway, Armisen and Brownstein still star in almost every sketch, and the versatile duo has established a solid stable of recurring oddballs who anchor the show. Their most popular characters continue to be feminist bookstore owners Toni and Candace, who hijack the Portland Trail Blazers dance team and eventually wreak havoc in the players’ locker room in Ep. 7/”Trailblazers.” (Though they didn’t wreak as much havoc as some of the players’ acting.) Meanwhile, avid outdoorsman Dave tries to coach his equally intense wife Kath on how to sleep through the night in Ep. 2/”Ecoterrorists”, and Nance gets jealous when ineffectual Peter re-connects with an ex (guest star Maya Rudolph) in Ep. 6 “Bahama Knights.” Each of those three pairs of recurring characters pop up in the season finale/”Getting Away,” which also manages to generate some unexpected heat between guest stars Jason Sudeikis and k.d. lang(?!)

Season 4 didn’t feature any sort of overarching plot, like Chloe Sevigny’s appearances in season 3 as the roommate who eventually comes between “Fred” and “Carrie.” I personally didn’t mind because that particular plot line ended up being somewhat of a drag on the back half of the previous season. More importantly, it meant more of a return to standalone lunacy for the show. (Sketch comedy series need serialized plots even less than the world needs another bass guitar player; in Ep. 4/”Pull-Out King,” musicians like Guns N’ Roses Duff McKagan and St. Vincent’s Annie Clark hilariously implore Carrie’s tax lawyer boyfriend to put down the guitar and do some *really* important work.)

For example, Portland hosts its first Bigot Parade after Mr. Mayor (returning guest star Kyle MacLachlan) struggles to come up with a new outsider group to celebrate. (Gay people are the “new normal,” after all.) The season’s standout episode, at least from a production values standpoint, is the goofy paranoid thriller “Celery,” in which a desperate salesman (guest star Steve Buscemi, who earned an Emmy nod for his work here) tries to increase the titular vegetable’s popularity. There are also hyper-specific/on-target barbs at people who decide to dropout of social media, misguided nostalgia, couples who decide to share finances, people who expect gay men to be trendy, and restaurants that make ordering food *way* too complicated.

And if it turns out you are craving some continuity, Portlandia still has you covered. The most surprisingly rewarding part of watching the show at this point is the familiarity the audience has developed with this kooky version of Portland, not to mention the non-actors who populate the rest of the cast. For example, Ronald Moore (not the one who created the new Battlestar Galactica) randomly pops up in the great, standalone “Punslingers” sketch. There are also repeat appearances by precocious red-headed kid Matthew, who alternately enlists the help of ecoterrorists, and scolds an adult for not sending a congratulatory online message quickly enough. On top of the non-actors, season 4 features more appearances than usual for the various professional pests played by comic Kumail Nanjiani. And along with MacLachlan, this batch of episodes features return trips from semi-regulars like Jeff Goldblum (who battles Brownstein’s Lance for the title of “Pull Out King”) and Ed Begley Jr. (as a priest pushing a trendy religion).

Season 4’s eclectic guest stars also include Kirsten Dunst, Olivia Wilde and Jason Sudeikis (though not in the same episode), Maya Rudolph, k.d. lang, Nick Swardson, Gus Van Sant, Dan Savage, the Portland Trail Blazers, and Steve Buscemi. There are no special features on this DVD set, which also marks the first time a Portlandia season isn’t being released on Blu-ray. While that’s certainly a disappointing turn of events, you shouldn’t let it dissuade you from checking out this smart, peculiar show, which is still at the top of its game.