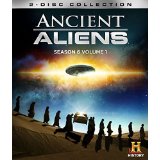 “Millions of people around the world believe we have been visited in the past by extraterrestrial beings. What if it were true?

Ever since Eric von Daniken released his speculative book and its subsequent 1970 film Chariots of the Gods, there has been an entire field of study created around something commonly called Ancient Astronaut Theory. The idea is that extraterrestrials have visited many of our ancient civilizations. The theory continues that these visitors had a hand in shaping our development, whether it be through technology or even manipulation of our very DNA. These believers point to a world of evidence to support their claims. There are tons of images from earlier civilizations that could certainly be interpreted as depicting modern devices, concepts, or even spacemen. There is plenty of speculation that some of the knowledge and accomplishments of these peoples could not have been possible without some outside interference. There are even those who believe that aliens best explain our religious beliefs and that God himself was/is an extraterrestrial being. Whatever your own beliefs on the subject, there are certainly some fascinating points to be made. There is no question that the speculations and observations bring up some interesting queries that deserve our attention. This series attempts to document much of this evidence and the beliefs these findings have inspired.

We find ourselves now with half-season releases. This one is called season 6 volume 1, but the episodes don’t appear to be completely in order. The series has ramped up the production quality with a slicker logo and more polished images.

There are 8 episodes on 2 discs with no bonus features.

The idea here is that there are a ton of secluded islands were you can find more than the Skipper, Professor and Mary Ann. Instead of coconut radios, aliens might have sophisticated underwater bases that would rival a James Bond film. Of course, there are the usual sightings clusters and plenty of animation about what these places might look like and how they might work.

Aliens And The Lost Ark:

Move over Indiana Jones. This episode uses Biblical references to the famed Ark of the Covenant and makes the expected claim that it was really given to Moses by aliens and not God. Charlton Heston was firmly for gun rights, and it looks like his Moses might have had an appreciation for the incredible weapon this episode speculates it might have been. The episode looks at its disappearance and speculates where it might be…that is, if ET hasn’t taken it back.

If you didn’t buy the whole secluded island idea, the show makes another run at you by suggesting maybe those bases are in hollowed-out mountains or on unreachable peaks. Naturally, the Greek stories of Mount Olympus come into the story here. Not only is there a claim that these places once existed but that they still exist today.

Col. Jack O’Neil and Doctor Danile Jackson won’t get a mention in this episode, but they are about as familiar with the idea as anyone. One of the largest points of contention about the possibility of aliens visiting Earth has to do with the likely vast distances they would need to travel. With stargates the trip is as instantaneous as having Scotty beam you up. The episode explores legends of doorways where aliens have apparently been seen appearing by ancient people. A sealed up cave purports to be just such a gateway to the stars.

No, we’re not talking about immigration reform here. Nothing the government can do about these aliens. This is more down-to-earth stuff like cattle mutilations and mass UFO sightings. Apparently the United States has more sightings than anywhere else in the world. I guess the aliens are keeping a close watch on us in particular. One of the highlights of the episode describes ancient glyphs that predate any known American civilization and a guy who claimed to find ancient treasure in a secret cave at the Grand Canyon. We’ll get Nicolas Cage right on that.

This one looks like the start of the next X-Men movie or comic. The episode explores children born with great abilities. Mostly we’re talking brains well above normal. But we also appear to have people with highly refined senses and empathic abilities enabling one to read another’s emotions and basic thought. Seems I’ve encountered someone like that somewhere along the line. Of course, the speculation is either alien genetic manipulation or downright human/alien hybrids. It’s the kind of idea that would give Mulder a heart attack…through mental control, of course. The episode also attempts to explain why aliens are doing this. The idea is they are trying to shape our evolution because they’re such nice guys.

Treasures Of The Gods:

No, that’s not the title of the next National Treasure film. You get the idea, however. This one deals with legends of great treasures being hidden in secret places. Lots of gold and trinkets have disappeared over the centuries, and there are still folks out there trying to find the stuff.

Aliens And The Red Planet:

You should pretty much have seen this coming. Ever since Galileo looked through the first telescope at the Red Planet, our imaginations have gone wild. Throw in ancient Mars legends, government conspiracies and sprinkle in that pyramid and face from the Viking photos, and you have plenty to drive a show like this.

Each episode is presented in its original broadcast 1.78:1 aspect ratio. The episodes look rather nice in their 1080p high-definition image presentations made possible through an AVC/MPEG-4 codec with solid bit rate numbers. Much of the footage is documentary-style location shoots that carry the obvious limitations. Black levels are solid.

I don’t really buy into most of what is reported here. That doesn’t mean that it isn’t interesting. It also doesn’t mean that the questions aren’t quite thought-provoking. We all have questions about the ancient world. Without the invention of time travel, all that we are left to do is speculate. That doesn’t mean it isn’t fun and entertaining. Definitely check it out. While I did find much of this very interesting, I remain quite skeptical. I do believe life exists somewhere else. I even believe it’s possible we’ve been visited. I’m just not sure I buy the whole Ancient Astronaut Theory. After watching about nine hours, I’m left with the same question. “It begins to boggle the mind.“

Gino Sassani is a member of the Southeastern Film Critic's Association (SEFCA). He is a film and television critic based in Tampa, Florida. He's also the Senior Editor here at Upcomingdiscs. Gino started reviewing films in the early 1990's as a segment of his local television show Focus. He's an award-winning recording artist for Omega Records. Gino is currently working on his 8th album Merchants & Mercenaries. Gino took over Upcomingdiscs Dec 1, 2008. He works out of a home theater he calls The Reel World. Favorite films: The Godfather, The Godfather Part II, The Body Snatcher (Val Lewton film with Karloff and Lugosi, not the pod people film), Unforgiven, Gladiator, The Lion King, Jaws, Son Of Frankenstein, The Good, The Bad And The Ugly, and Monsters, Inc.
Houdini “31 Nights of Terror” Sharknado 2: The Second One (Blu-ray)