Posted in: Disc Reviews by Archive Authors on October 9th, 2014 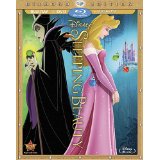 Most every child knows the story of Disney’s Sleeping Beauty from early video, books and DVD.  Unless you went to see the movie at a theater back in the 1959, however, you probably saw a version that was not crisp and colorful. Finally, after what seems forever, the family animated fantasy has been Blu-ray remastered and digitally restored in super widescreen. The Blu-ray, DVD and Digital HD have new bonus features and include the DVD release’s special extras as well.

King Stefan and Queen Leah hold a celebration for their first child, the Princess Aurora, with guests from around the kingdom.  They even invited the good fairies Flora, Fauna, and Merryweather who are excited to see the beautiful child. What they failed to do, however, was invite Maleficent, a not-so-nice fairy who has brought nothing but woe to the kingdom.

Maleficent arrives at the christening, and after words of being purposefully omitted, puts a curse on Aurora.  She tells all the people in the great castle hall that on her sixteenth birthday she will get pricked by the needle of a spinning wheel and die.  She leaves, and the three good fairies, unable to take the curse off Aurora, alter it to allow her to fall into a deep sleep only to be awakened by true love’s kiss.

The story goes on with the good fairies taking Aurora, renamed Briar Rose, to a house in the woods to grow up away from Maleficent’s trickery.  So begins a story of the beautiful princess and the curse that changes her life until one fateful day a noble prince arrives at the castle.

The colorful, charming and sometimes wicked story comes off the Blu-ray in grand style.  This super widescreen version mirrors the original release in 1959 without any loss from side to side.  What was missing due to the shortened former video edition now has been restored, showing all the splendor of the castle, the woods and the final battle between Prince Phillip and the dragon.

Sleeping Beauty is presented in its original aspect ratio of 2.55:1. The 1080p image is arrived at with an AVC MPEG-4 codec at an average 35 mbps. The high-definition image presentation is flawless, to be sure. Colors pop as if the material were produced yesterday. Black levels allow for wonderful shadow definition. The animation was not as flowing as other Disney animated features, but that doesn’t mean it wasn’t up to their established standards. The high definition allows you to appreciate the multi-plane animation shooting technology that gives you depth within a flat image. There’s plenty of detail to be found in this rather sharp image.

The DTS-HD Master Audio 7.1 is something purists might not enjoy. That’s OK; the mono original track is still there. But you’ll find that they used the surround mix subtly without changing what was really already there. The sound quality is very good, especially for the digital Academy Award-nominated musical soundtrack.  The dialog comes across crisp and clear, and the excitement of special effects sound created during the Prince Phillip versus the Maleficent dragon scene stands out.

Once Upon A Parade: (8:41) Finds Sarah Hyland taking children to see the Festival Of Fantasy Parade in Disney’s Fantasyland.

The Art Of Evil – Generations Of Disney Villains: (9:48) Here baddies like Maleficent are shown as the animators talk about their days drawing the wicked adversaries of some of the top films. Animators include the Disney legend animator Marc Davis.

@DisneyAnimation: Artists In Motion: (4:27) Watch Brittany Lee show how she designs the characters in special paper for artists to go by when making an animated film.

Beauty-Oke: Sing-along to “Once Upon A Dream.

Deleted Scenes: (13:00) There are three told through storyboards and narration. They include The Fair, The Curse is Fulfilled, and Arrival Of Maleficent, each of which were omitted from the original film.

All Of The DVD Bonus Features Are Contained Under Classic Features

A charming classic film for families.

“31 Nights of Terror” Sharknado 2: The Second One (Blu-ray) “31 Nights Of Terror” Dracula Untold