“31 Nights Of Terror” The Following: Season 2

Posted in: No Huddle by Brent Lorentson on October 16th, 2014 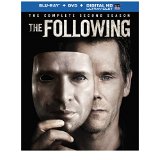 The creator of Dawson’s Creek and The Vampire Diaries, Kevin Williams, delivers a thriller that is a bold new entry in the crime drama for television.  Season one of The Following was 15 episodes of nail-biting bliss that kept the viewer guessing and riveted long after its gut-wrenching cliffhanger.  For a while I was beginning to wonder if Williamson had lost his touch with the Scream series, but what you’ll discover in the Fox series is that Williamson may just be the king of creating and penning one of the darkest serial killers on the small screen.  Season one of The Following had us in the back seat as Ryan Hardy (Kevin Bacon), a liaison with the FBI, pursues Joe Carroll (James Purefoy) a charismatic serial killer with a devoted cult following.

Season two picks up right where season one left off with Hardy and Claire (Natalie Zea) stabbed and left for dead.  Ryan manages to recover; Claire isn’t so fortunate.  We jump ahead a year later, and Ryan has taken the loss of Claire badly. Not only is he battling alcoholism, he’s roped his niece Max (Jessica Stroup) into continuing his investigation into Carroll…”Wait, I thought he was dead.”, you may be thinking, but that is the beauty of television; writers can always find a way to resurrect that fallen villain from the dead just so our hero can hunt them down once again.

Mike Weston (Shawn Ashmore) returns to help Ryan out, but the year that has passed along with the events he experienced from season one have changed the man we first met.  Mike struggles with his demons and this season is confronted with many situations that will break him and present choices that will possibly lead him down a darker path that might leave him as damaged as Hardy.  This struggle to maintain his conscience leads to some great dramatic moments in the show.

Season one worked as a tight, methodical thriller where Hardy and Carroll played an elaborate game of cat and mouse. This time the writers take this hunt to a ludicrous level.  Not only does the FBI have to contend with Carroll and his loyal followers, but now a new enemy is on the rise, one that wants to add Carroll into their fold and become this insane extended family of psychopaths.  This kind of insanity is over the top; is it very believable, though?  Who cares? This is television; let them go crazy and run with it. If we can have TV shows with aliens that all speak perfect English, then a family of serial killers creating a super cult of killers should have its place on TV as well.

Season two is unbridled insanity that announces to America that you are no longer safe and that at any moment some nut with a mask will kill you, whether it’s for fun or for a cause.  That is what makes season two so startling and terrifying; it lets us know that your friendly neighbor next door, the barista at your favorite coffee shop or even your loved one could be a killer.  How does one combat this?  Can it even be fought?  Williamson gives us the one man who can save us all, and that is Ryan Hardy.  Where Jack Bauer is the one-man army against terrorism, Hardy is the army against cult serial killers.

I don’t want to give much away in the form of what kind of killers will be joining up with Carroll this time around, but what I will tease you with is that Carroll does become the prey of some of these characters as well.  Seriously, if you got excited about Dexter having a foe (granted, Lithgow was the only one that mattered in my book after the first season), the characters we are given this season are monsters by comparison.  If the Scream franchise taught us anything, it’s that Williamson has a certain insight towards sequels, or a second season in this case.

The theme this season is heavily pointed toward how people relate and deal with tragedies within the family unit.  Whether it’s coping with the loss of loved ones, the threat against loved ones, or simply helping those you love, every character reacts in their own way.  The need to belong to a family is heavily explored as well as we see newcomer to this season Mandy (Tiffany Boone).  We watch how she is pulled from her “real” family and over the course of the season bounces from one twisted cult to another, each offering her the family dynamic she wants.   Though many may sympathize with her character and see her as a lost soul, I personally had a hard time feeling bad for her.

This is a show designed for binge-watchers, those like me who hate the thought of having to wait weeks for the conclusion of the story.  Coming in at 15 episodes, I had this devoured over a well-paced weekend, but easily this could have been watched in less time.  The creative team involved knows how to hook a viewer and make us click to the next episode like an obliging addict.  This is a well-crafted drama; where the first season hits you with finesse, season two hammers the viewer with a blunt instrument.

I’m not exaggerating when I say this may be the most violent series on television, and it isn’t even on a paid cable network.  There is blood, but never an overabundant amount, and that is the only way I can believe the show skates past the ratings board, because there are some moments that are just brutality at its most animalistic.  How Ryan Hardy hasn’t gone mad from all the violence is something the show dips its toes into, where Ryan himself has claimed more victims than even some of the more violent killers in the show.  Though Ryan wants to live a normal life, is this even possible? Can a man be pushed so far into the darkness that salvation is just an impossible task to achieve?

If you are looking for a series with a faster pace than True Detective and a body count that rivals The Walking Dead, this is the series you need to be watching.  The twists may not have the punch of the first season; season two makes up for it with plenty of shock and awe.  The comparisons to True Detective and Hannibal are hard to avoid, but the show has a unique voice that is all its own.  With clever dialog and twists that drive the story to some dark places, The Following is heading into its third season in Januaryand this reviewer is a loyal acolyte who will be watching.

Brent Lorentson is a horror writer and film critic based out of Tampa, Florida. With a BA in Digital Film, he co-wrote and co-directed Scavenger Hunt. His short stories have appeared in various horror anthologies. In 2019 his short script Fertile Blood will be a part of the anthology horror film Slumber Party. He is currently working on his first novel A Dark and Secret Place set to be released in late 2019. Favorite Films: Taxi Driver, Fight Club, I Saw the Devil, The Wild Bunch, Dawn of the Dead, A Clockwork Orange, Pulp Fiction, Heathers, The Monster Squad, and High Fidelity.
“31 Nights Of Terror” Contest: Win Autumn Blood From Arc Entertainment Men, Women and Children