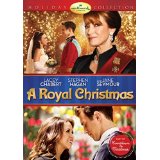 Tis the season to be…overwhelmed with a crushing number of Christmas-themed movies on our television screens. In addition to holiday staples like A Christmas Story, It’s a Wonderful Life, and Die Hard (yeah, I said it), many networks roll out original, made-for-TV yuletide tales. The Hallmark Channel is certainly doing its part this year with its “Countdown to Christmas”, which includes 12 new movies. One of those films transports us to the fictional land of Cordinia for the painfully cliched romantic-comedy stylings of A Royal Christmas.

Emily Taylor (Lacey Chabert) is a Philly girl who has been dating her charming boyfriend Leo (Stephen Hagan) for almost a year. Leo is a foreigner who came to America to attend business school, and Emily is a seamstress/aspiring fashion designer. (Get it? She’s a seamstress…and her last name sounds like “tailor”…it’s *that* kind of movie.) As the couple prepares to spend their first Christmas together, Leo is summoned back home by his mother. It’s right around this time that Leo reveals to Emily that he’s actually Prince Leopold, heir to the throne of Cordinia.

Leo and Emily are in love, so he brings her to Cordinia to meet his domineering, disapproving mother Queen Isadora (Jane Seymour). Isadora immediately dismisses Emily as an unworthy American and schemes to have Leo rekindle his relationship with his more regal ex Natasha (Katherine Flynn, Seymour’s real-life daughter). Emily makes the expected high-society blunders, but her kind-hearted nature endears her to the palace staff, led by butler Victor (Simon Dutton). But will Emily be able to convince Isadora that she’s fit to be a queen and (more importantly) good enough to marry her son? Let’s just say this is a lighthearted Hallmark Channel holiday movie that isn’t out to leave a lump of coal in your stocking; so you can probably figure out the answer.

In fact, A Royal Christmas embraces every rom-com convention in the book more readily than it employs Christmas movie cliches. The film opens with a jaunty, vaguely jazzy tune, the lead character has a token minority best friend, and there are goofy pop music montages of Emily and Leo trying to make the stoic palace guards flinch, and Emily learning how to be a proper lady. The one cliché that actually sort of works is Emily’s grand “Top of the Stairs” entrance at a fancy ball.

The moment delivers for the same reason any romantic comedy is enjoyable: it’s being acted out by a likable performer. Chabert won’t be picking up any trophies this awards season for her work here, but she brings a relentless good cheer to Emily that makes her a heroine worth rooting for in the end. Hagan is appropriately debonair as Leo, but you’ll likely be yelling at him to grow a pair and stand up to his mother much earlier than he does. Seymour (Dr. Quinn, Medicine Woman) is easily the biggest name in the cast, and Isadora had the potential to be a deliciously wicked antagonist. However, the character and the performance wind up being an unappealing stick in the mud for most of the movie. (Even Isadora’s change of heart feels way too abrupt.) Most of my favorite moments actually came from Dutton’s more deadpan work as Victor.

A Royal Christmas clocks in at 87 minutes, and there are no special features on this DVD. The movie already performed very well upon its premiere on the Hallmark Channel last month. Maybe I’m being a grinch, but I wish A Royal Christmas — which borrows from Cinderella, Roman Holiday, The Princess Diaries and others — had placed more emphasis on the Christmas part of its title instead of merely being a romantic comedy that happens to take place during the holiday. (Even Die Hard integrated Christmas into its story more effectively.)

The movie has a purportedly heartwarming subplot involving an orphaned girl that could’ve absolutely been excised from the final cut. There’s also some wince-inducing banter early on to go along with some blatantly hilarious product placement in the very first scene. However, the fact that I even considered yelling at Leo to stand up for himself is a sign that I was at least somewhat engaged in what was happening. Then again, other parts of A Royal Christmas might explain “where the term ‘royal pain’ comes from.”