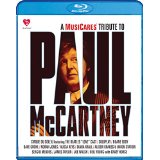 I’m not really a big Beatles fan. That will shock, anger, and dismay many of you. Sure, I’ve got a couple of favorites, but nothing I feel the need to hear over and over again. Now, with that said, I am a fan of Paul McCartney. Of all the Beatles he has evolved the most. He has gone from a kid who was nothing really special, just in the right place at the right time, to a very accomplished musician. Few musicians today can match his performance skills on almost any instrument. While a lot of celebrities talk about compassionate subjects, I get the impression McCartney is more sincere than most. Perhaps it’s this sincerity that makes him such a good songwriter.

Paul McCartney is a great example of what Darwin meant by survival of the fittest. No one in the music business has learned to adapt and thrive like Paul McCartney. The term timeless has been applied so often to so many performers that it might have lost any meaning. Still, if anyone deserves that description, it is Paul McCartney. With The Beatles he helped define the 60’s and reinvent Rock and Roll. In the 1970’s and 80’s he continued the hits with Paul McCartney and Wings. When Wings finally disappeared into the midnight sky, McCartney was still at it as a solo artist. Certainly, McCartney albums are fewer and far longer between. Still, each new release is an exercise in quality. Even when I don’t care for a particular McCartney song, it’s easy to hear the work that went into each note.

Each year MusiCares delivers a tribute to their artist of the year. In 2012 it was Paul McCartney. The stage is usually set with some artists who perform some of the man of the hour’s music. The artist himself takes the stage a couple of times as well. This version of the night is only an hour in length. The audience is filled with celebrities, who likely have the kind of money this charity event charges to get in the door. You’ll see faces like Tom Hanks, David Crosby and Jim Carrey watching the festivities.

Their are most definitely highlights and moments that aren’t so impressive. The opening performance of Beatles songs by Cirque du Soleil is nothing more than an abstract theater performance to recordings of the band’s hits. Alicia Keys talks a lot about herself before delivering one of the poorest examples of Blackbird I’ve heard. Keep in mind I’ve seen a ton of coffeehouse versions over the years. I love Neil Young, but he chose a song ill-suited for his voice in I Saw Her Standing There. He also rewrites the first verse. Something about a beauty queen. I’m a huge fan of James Taylor. I’ve got all of his CD’s and once hung out with his brother Livingston. Still, he did not bring Yesterday to life. He would have been better off with something like The Fool On The Hill, which was performed in a jazz-fusion style. One of the surprise performances of the night was Coldplay giving us a very sweet acoustic version of We Can Work It Out. There was a very original performance of No More Lonely Nights featuring Jerry Douglas and Alison Krauss. It was a soft country/Celtic mix of instruments that was by far the most interesting of the concert.

Of course, McCartney took the stage twice and offered a new song called My Valentine. After so many years there’s no question the performer still has it and did a fine job of captivating his audience and, I’m sure, his fellow musicians.

The concert is presented in its original aspect ratio of 1.78:1. The 1080p image is arrived at with an AVC MPEG-4 codec at an average 30 mbps. The high-definition image presentation offers pretty solid quality when you consider the shifting lights and issues of a live stage performance. I found black levels weak and washed out. It was somewhat compensated for with fine contrast between the dark and the light. The images under the spots were well-defined and sharp. I could easily read the Shure SM58 branding on the microphones during close-ups.

The DTS-HD Master Audio 5.1 pretty average. You can hear the music as well as any CD, but there were issues with the mix itself. Of course, that’s not the fault of the transfer. Vocals got lost sometimes, and a violin part was completely silent in the mix. There is an stereo mix but it isn’t as dynamic as the DTS version. It was definitely a bit of a disappointment at times.

McCartney has had one heck of a ride starting with the maniacal fandom of The Beatles through Wings and his various more recent projects. I had the honor of catching one of his shows back in the early 90’s, and it was the closest one was ever going to get to seeing The Beatles live. Clearly, it’s a well-deserved award and an average collection of tributes here. Shout puts it out in an inexpensive Blu-ray for you to enjoy. “And that’s an invitation.”

Gino Sassani is a member of the Southeastern Film Critic's Association (SEFCA). He is a film and television critic based in Tampa, Florida. He's also the Senior Editor here at Upcomingdiscs. Gino started reviewing films in the early 1990's as a segment of his local television show Focus. He's an award-winning recording artist for Omega Records. Gino is currently working on his 8th album Merchants & Mercenaries. Gino took over Upcomingdiscs Dec 1, 2008. He works out of a home theater he calls The Reel World. Favorite films: The Godfather, The Godfather Part II, The Body Snatcher (Val Lewton film with Karloff and Lugosi, not the pod people film), Unforgiven, Gladiator, The Lion King, Jaws, Son Of Frankenstein, The Good, The Bad And The Ugly, and Monsters, Inc.
Exclusive Interview With Laura Jacobs From Muck Penguins of Madagascar (Blu-ray)