Posted in: Disc Reviews by Gino Sassani on August 17th, 2015 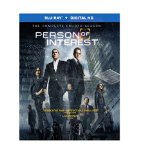 “We are being watched. The government has a secret system. A machine that spies on you every hour of every day. I designed the machine to detect acts of terror, but it sees everything. Violent crimes involving ordinary people. The government considers these people irrelevant. We don’t. Hunted by the authorities, we work in secret. You’ll never find us. But victim or perpetrator, if your number is up, we’ll find you.”

The premise of Person Of Interest was turned on its head in season 3. If you are new to the show, don’t even think about starting here. But if you’re caught up, you know exactly what I’m talking about. A new rival machine named Samaritan has gone operational. The library has been abandoned, and our team has had to take new identities to trick the machine. For the start, they are invisible, but if they get noticed, Samaritan will eliminate them as threats to its survival. It’s an apt designation, because they are, indeed. It’s a war between two gods, we are reminded throughout. And the stakes are higher than they’ve ever been on the show. So I received a new number to investigate. It’s the fourth season of Person Of Interest, and it’s out now on Blu-ray. And this is what I found out.

“You have to pick a side, because this is war. And the thing we’re up against, it has virtually unlimited resources. You know how many we have? Five … six, if you count the dog.”

But what a five we have. The core team remains. Harold (Emerson) is the one who invented the original machine. He built in a back-oor protocol that sent the irrelevant numbers to him. So he’s been the leader of the team as the one who understands the machine the best. Of course, the show’s fans will debate that statement because of Root, played by genre favorite Amy Acker. She began as a crazy character who looks upon the machine as a god. She was ruthless and would kill without a thought. She was a threat to Harold and the team, but now they work together. The machine “talks” to her through an implant in one of her ears. It’s all the aftermath of events of the last two seasons. She’s still crazy as can be, but she’s learned to respect Harold and the team. John Reese (Caviezel) is the brawn of the team. He was once part of a black ops unit and has scary skill in combat. He’s the Clint Eastwood character who can take out ten guys before they can even pull their own weapons. He has a penchant for putting one in the kneecap. Harold has a rule about unnecessary killing. That rule might be hardest for Shaw (Shahi). She’s also ex-black-ops, but is more willing to kill. She was born with a condition where she doesn’t feel emotions. Like the machine itself, she sees the situation more as tactical. She still tries not to kill, because it’s what Harold wants. Fast becoming my favorite member of the team is Detective Fusco, played by Kevin Chapman. I think it’s absurd that they haven’t told him about the machines yet. He’s made one of the biggest turnarounds on the show and has become one I look forward to seeing. Oh… and don’t forget Bear, played by Bocker. He’s the dog.

Last season we also lost Joss Carter, played by Tarajl P. Henson. But fans of the actress and the character will get a chance to see her return for an episode. Part of it is flashback, and part of it is a touching scene with Reese where she helps him through a rough situation. It’s all brought about when Reese pulls a case that she worked on in the past.

The team has to do things they didn’t before. They all have other jobs now, because Harold’s money is no longer at his command. Sure, the machine provides a lot of cash, but not enough. I like this new limitation. It felt like cheating when Harold could just buy a company to set up a case. Plus the new job for Reese is a police captain that puts him inside the cops. He’s Fusco’s official partner now. Shaw’s job as a cosmetics salesman at a department store is a hoot. Harold’s a college professor, and Root is the only one who gets to go from cover to cover, identity to identity. They created these new blind identities at the end of last season by planting a glitch in Samaritan before it went online. Of course, Root would get special treatment. For the others, when the new identity is blown, it’s gone for good. They now work out of an old abandoned subway line with extraordinary architecture. In a tribute to the old spy shows, they enter through a candy machine by putting in money and entering the secret code. I don’t know how you get in if you run out of coins.

“Imagine if the world had utterly changed and no one noticed a thing. I’m talking about an international stealth operation to acquire and shutter every company researching Artificial Intelligence. An AI slipped into the world unannounced, then set out to strangle its rivals in the crib.”

But we noticed it, didn’t we? The new machine Samaritan is the big bad for the season. It is just as powerful as Harold’s machine, but it is more ruthless. It wasn’t taught the humanity lessons that Harold taught his machine. It doesn’t help that Samaritan is under the control of Decima, a group of bad guys who have been a thorn in the team’s side for quite a long time. At the head of this group is Greer (Nolan). He’s this show’s version of the Cigarette Smoking Man on The X-Files. Like that show, this is a character who has been around almost since the beginning, but kept more in the shadows until it was time to strike. He’s about as wrinkled as aforementioned cancer-stick character. He’s managed to convince high-ranking government agents that Samaritan should replace the original machine. Once that’s done, Samaritan uses that control to diabolical means. It will crash the stock market and manipulate crime, virtually eliminating it one day and letting it get out of control the next. Its plan is not only global domination, but it’s trying to flush the team out in the open to eliminate them.

While the season is dominated by this threat, fear not for the traditional aspects of the show. For the most part the numbers keep coming, and the missions to deal with them contain the usual methods and stories. True, many of the numbers are related to this overall war, but many are not. There are stand-alone episodes of the team helping those in danger.

There is even a secondary threat this season. Replacing HR and Vigilance is a street gang called The Brotherhood. These guys are more like the kind of criminal gang you’d see on The Wire. A good reason for that could also be that second in command happens to be Marlo Stanfield himself, Jamie Hector. I almost found myself looking for Chris and Snoop in the gang. He’s the same kind of dude here, and it’s a nice counter to the more philosophical fight with Samaritan. The Brotherhood is run by Dominic (Duke).

Returning to the show also is Control, played by The Practice’s Camryn Manheim, although she’s a bit rogue once she discovers the truth about Samaritan. We get a little of Senator Garrison, played by The Wire and Gotham favorite John Doman. We also get to see the return of Elias, played by Enrico Colantoni. He’s been nearly AWOL since Carter’s death, but gets to play some big stuff here as Samaritan manipulates a gang war between him and The Brotherhood. He’s been one of my favorite returning characters, to be sure.

Samaritan also has its own teams, which add new faces to the show this season. These agents are the counterparts to the Machine’s team. The big tough agent is Martine, played by Cara Buono. She’s the kick-butt female version of Reese, but without the no-killing issues. One of Control’s teams includes Spartacus’s Asher, Nick E. Tarabay. Another new face is Dr. Iris Campbell, played by Wrenn Schmidt. Reese is ordered to see her because he ends up shooting too many people, and she ends up a little bit of a romantic interest for the character.

Each episode is presented in its original broadcast aspect ratio of 1.78:1. The 1080p image is arrived at with an AVC MPEG-4 codec. The high-definition image presentation provides a visual experience very much like the broadcast. This is a clean sharp image that takes advantage of texture and color. You will be particularly impressed with the new subway set, where details are quite amazing. Black levels are good, and flesh tones are pretty much reference. It’s a very natural-looking image presentation.

The DTS-HD Master Audio 5.1 is mostly there to serve the dialog. The surrounds do get a chance to kick in for the subtle ambient stuff that makes it more of an immersive experience. Once in a while they’ll be some explosions or fire fights that will wake up your sub for some solid low-end response. The music is particularly hypnotic and haunting, and it comes out just perfectly placed in the mix.

The Music Of Interest: (17:44) This is one of the few television network shows to still use an orchestra. We get to see some recording sessions and a great look at how that live instrument work is combined with the keyboard sampled material to create a unique score for the show.

Going Underground With Root And Finch: (4:57) This is a tour of the new subway set with Acker and Emerson as your guides.

This is all the brainchild of Jonathan Nolan, the younger brother of Christopher. And while JJ Abrams is playing in a galaxy far, far away, he remains executive producer on the show, and his presence is strongly felt. This is the kind of show he excelled at. The show also began before the NSA scandals about spying and the Snowden leaks. It makes it ahead of its time. It is science fiction, and it does depict a future world, but maybe “only by minutes”.

Gino Sassani is a member of the Southeastern Film Critic's Association (SEFCA). He is a film and television critic based in Tampa, Florida. He's also the Senior Editor here at Upcomingdiscs. Gino started reviewing films in the early 1990's as a segment of his local television show Focus. He's an award-winning recording artist for Omega Records. Gino is currently working on his 8th album Merchants & Mercenaries. Gino took over Upcomingdiscs Dec 1, 2008. He works out of a home theater he calls The Reel World. Favorite films: The Godfather, The Godfather Part II, The Body Snatcher (Val Lewton film with Karloff and Lugosi, not the pod people film), Unforgiven, Gladiator, The Lion King, Jaws, Son Of Frankenstein, The Good, The Bad And The Ugly, and Monsters, Inc.
The Killing: The Complete Fourth Season The Knick: The Complete First Season (Blu-ray)