Knifed Up: The Evolution of Cosmetic Surgery 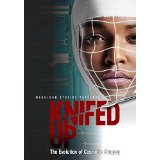 In a relatively short amount of time, Moguldom Studios has built up a diverse stable of bite-size documentaries that focus on contemporary African American life. Some would say these independent “docutainment” films are limiting themselves to a niche audience, but I appreciate them for tackling well-worn topics from a different cultural perspective. Knifed Up is one of two largely superficial plastic surgery docs released by the production company this week. The film’s subtitle is The Evolution of Cosmetic Surgery, so it operates from the premise that women have gone from wanting to look like Barbie to wanting to look like Nicki Minaj or a Kardashian.

Of course, what that really means is that physical features more closely associated with African American women — fuller hips, bigger busts/butts — have become more desirable in recent years. Knifed Up reveals that white people still account for 70 percent of plastic surgeries, but the number of black people opting to get cosmetic work is absolutely on the rise.

Before delving into the African American experience, Knifed Up name-checks the usual culprits that lead to unhealthy body image issues among all individuals: high vanity and low self-esteem (people can’t help but compare themselves to the celebs they see on TV, at the movies, or in magazines) and societal pressure (the rise of social media has exponentially increased the number of people who can anonymously judge what you look like).

The 45-minute doc, however, ultimately bites off much more than it can chew. Knifed Up haphazardly slices its way through about half a dozen tangents, whereas I think it would’ve been better served to settle on two or three topics (at most) to examine closely. The film bounces from the dangers of plastic surgery (it killed Michael Jackson and Kanye West’s mom!) to the idea that people with lower-incomes are more likely to subject themselves to higher-risk, black market procedures. We see “Before and After” pictures of celebs like Minaj, Lil’ Kim, and Wendy Williams (the latter two of whom are slowly transitioning into cat people), and a segment devoted to celebs with breast cancer (Robin Roberts, Angelina Jolie) who have undergone reconstructive procedures. I would point out that the latter segment doesn’t jibe with the rest of Knifed Up’s tone, but it’s hard to pin down exactly that tone is.

We get talking head commentary from a roster of cosmetic surgeons, magazine editors, an exotic dancer, and second-tier radio personalities. It’s an admirable mix that brings less academic, more relatable voices into the fray. However, it also makes for a somewhat chaotic presentation. It also hardly leaves time for potentially interesting topics like some African American women waiting to get cosmetic surgery later in life. (“Black don’t crack”? Well, it does eventually.) There’s also a tiny wisp of screen time devoted to the notion that the number of men getting plastic surgery is also trending upwards.

In the end, Knifed Up seized upon an interesting idea — plastic surgery is not nearly as taboo in the African American/minority communities as it used to be — but decided to run in too many different directions with it. The result is a lively, scattered cosmetic surgery doc that only goes skin deep.

Bottoms Up: Rise of the Backside When the Checks Stop Coming In