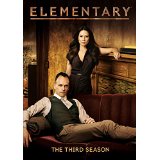 Modernizing Sherlock Holmes has been a popular trend in film and television lately. We have seen two slick action film adaptations courtesy of Guy Ritchie, a contemporary BBC adaptation (Sherlock), and now there is Elementary, which transplants Sherlock Holmes and his loyal companion Watson from Victorian Era England to modern New York.

This season is all about Holmes returning. He brings with him a new protégée in the form of Kitty Winter, played by Ophelia Lovibond. Don’t both actress and character names sound like a Bond girl name? Holmes also finally gets a more friendly relationship with Detective Bell, played by John Michael Hill.

You get all 24 episodes on six discs with a pretty solid list of extras that include the usual CBS season summary, a profile on the evolution of the Watson character, and profiles of Kitty Winters, Bell, and Holmes himself. There’s a gag reel and a couple of short behind-the-scenes features. It’s another pretty solid release.