Posted in: No Huddle by Gino Sassani on September 9th, 2015 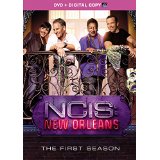 When you have the highest-rated drama on television, there is a temptation to milk it for all that you can. We’ve seen it happen with both the Law & Order and CSI franchises. The results tend to be mixed, with some capturing and even exceeding the popularity of the original. Others never quite seem to connect and are gone while their mother ship is still on the air. It’s too early to tell if NCIS: New Orleans will fall in the former or latter category. There’s certainly plenty of the tight writing and production value that the NCIS label is known for. The cast is better than average, and we have the addition of an iconic city with plenty of personality to help drive the atmosphere of the show. But how does that translate on a week-to-week basis? The jury’s still out on that one.

NCIS: New Orleans began as an episode on NCIS the previous season. These backdoor pilots are more and more common these days and allow us to get used to the characters and situations under the guidance of characters we already feel something for. That two-part episode is included in this DVD release and sets up our series:

Dwayne Pride (Bakula) is a native of New Orleans. His family has history here. His father (Keach) is in prison for various fraud activities. His daughter Laurel (Caswell) is in collage studying music, a passion she and her father share. He’s in the process of separating from his wife Linda (Turco) and is pretty much living out of the NCIS office in New Orleans. He goes way back in his defense of the city and considers protecting it as his own private responsibility.

The team is a lean one compared to the other NCIS shows. Pride’s long-time friend and right-hand man is Alabama native Christopher LaSalle, played by Lucas Black. LaSalle has the old southern charm and some redneck tendencies. The team’s medical examiner is Dr. Loretta Wade, played by The Shield’s own favorite CCH Pounder. Her assistant is the geeky conspiracy nut Sebastian Lund, played by Rob Kerkovich. He’s absolutely the comedy relief on the team and usually explains too much and makes the requisite science fiction or conspiracy references that tend to annoy his colleagues. The new member of the team is transfer Agent Meredith Brody, played by Zoe McLellan. She’s bounced around from place to place, not feeling confident enough to lay down roots. When things have gotten rough in the past, she usually runs away to a new assignment. She’s trying to become a member of this family, though, and is slowly letting her guard down.

By mid-season we’re treated to the recurring character of Patton, played by Daryl “Chill” Mitchell. It was obvious that the show wasn’t building the kind of chemistry this kind of series requires. The actors and characters were fine, but they just didn’t blend into the kind of unit you have on the other two shows. I think the show runners saw this pretty early and took a couple of steps to deal with it. The first was adding the Patton character, who became the hacking whiz and a rival for Sebastian. The first dynamic chemistry starts here between these two characters, but doesn’t go as far beyond as one might hope. There’s obviously a shorthand between LaSalle and Pride and a long history between Pride and Dr. Wade. It just doesn’t translate as smoothly as I or the show runners had hoped.

The rapport did improve as the season went along, but there’s an awkwardness here that I can’t explain. If the net chatter is any indication, I’m not the only one who feels this way. Perhaps I’ve become jaded by how good that is between the characters of the other shows. Brody really doesn’t fit in. I know that’s part of the dynamic, but it’s not getting any better. If the show has any hope of improving, I suspect it might have to start with losing her. I do suspect there will be some retooling when the new season starts.

Another way to deal with the uncomfortable fits is to rely too heavily on the original cast. The first five episodes all feature appearances by characters from the original show. Often it’s through video conferencing, but that’s a lot for a show expected to stand on its own. In the end, that’s exactly what it is going to have to do.

I love Scott Bakula and was a fan of both Quantum Leap and Star Trek: Enterprise. He adds that command authority mixed with caring father figure here that he delivered as Captain Archer. One of the big issues, however, has to do with his New Orleans accent. He traveled in and out of it so much that it was actually getting distracting. At some point they decided to kill the accent, or at least tone it way down, and it appears all but gone by the end of the season with a few exceptions that once again stand out, and not in a good way.

The set is another good detailed environment. It is set up very much like the one from the LA show. You have a bullpen area with ornate rugs under the desks and an upper level with a railing. I have to say it looks too much like the LA set. That’s were any familiar elements end. The show takes full advantage of its New Orleans setting. From the music to the local culture and architecture, the series has tied the atmosphere of New Orleans rather solidly to the stories and action. It’s the second show I’ve binge-watched in the last week set in New Orleans. The other was The Originals, and while both do a superb job of bringing in the city, NCIS: New Orleans does a more masterful job.

The cases also have a New Orleans flair to them. From the voodoo culture to the iconic Mardi Gras celebration, the stories take us into the heart of the city. The aftermath of Katrina figures into an episode as do the week-long Halloween celebrations. Here’s where it’s so important that we have a character who understands the heartbeat of the city so much. Brody serves as our stand-in, because this is all new to her. A vital character to have, just rather poorly written and portrayed. And that’s certainly not something I have ever said about any NCIS show.

Pride has a bit of a nemesis in local politician Douglas Hamilton, played brilliantly by Steven Weber. We just don’t see Weber enough these days, and he works well as a kind of foil for Pride. Too often these kinds of characters are loved by everyone, and it’s just not realistic for Pride, who absolutely has had to step on toes along the way. We get the idea that Hamilton can be a good or bad guy, but it’s always dynamic when these two characters share the screen. Hamilton’s father is played by Bakula’s old Quantum Leap partner Dean Stockwell, who has guest starred on Bakula’s Enterprise stint as well.

Pride also has a criminal nemesis he calls Baitfish (Livingston). He once used the man to get to the Broussard crime family. Now he’s turned the fleeing felon into a dangerous weapon looking for revenge on Pride and anyone close to him. It’s going to cost lives that are close to the team and will spread out over several episodes.

For LaSalle, it’s a brother named Cade (Crawford). The man has mental issues and a criminal history. Of course, he’ll end up a suspect in a murder investigation, and we get to see just how determined LaSalle can get. Brody has an ex-fiancée to deal with as parts of the characters’ history get revealed and tied to crimes the team is investigating.

Two Law & Order vets reunite for The Walking Dead episode. B.D. Wong plays another psychologist in the episode who is friends with Pride. He discovers he was exposed intentionally to toxic radiation and wants Pride to find his killer before he dies. It’s straight out of the classic film DOA (the original, not the remake). Also along for that episode and as a recurring character is Diane Neal, who played the ADA Casey Novak in the Law & Order franchise, particularly SVU. She appears headed for a more permanent role in the show’s future. Again, there is a bit of a search for chemistry, and she also helps to create much-needed character chemistry.

You get all 23 episodes and a few features in this set. There’s a look at the Halloween episode, the Mardi Gras episode, and features on the show’s inception and production design. You’ll get a set tour, character profiles, music, and a look at the writer’s room. It’s all part of the plan to try to get you to fall in love with these characters like you have with Gibbs and his crew. “I can appreciate that.”

Gino Sassani is a member of the Southeastern Film Critic's Association (SEFCA). He is a film and television critic based in Tampa, Florida. He's also the Senior Editor here at Upcomingdiscs. Gino started reviewing films in the early 1990's as a segment of his local television show Focus. He's an award-winning recording artist for Omega Records. Gino is currently working on his 8th album Merchants & Mercenaries. Gino took over Upcomingdiscs Dec 1, 2008. He works out of a home theater he calls The Reel World. Favorite films: The Godfather, The Godfather Part II, The Body Snatcher (Val Lewton film with Karloff and Lugosi, not the pod people film), Unforgiven, Gladiator, The Lion King, Jaws, Son Of Frankenstein, The Good, The Bad And The Ugly, and Monsters, Inc.
Lego Star Wars: The New Yoda Chronicles The Vampire Diaries: Season 6 (Blu-ray)