“31 Nights of Terror” A Plague So Pleasant 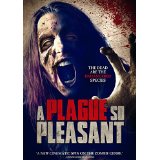 “My name is Clay Marshall, and I am one of the many survivors of the zombie apocalypse.”

Yes, you read that right. The word “many” in the above quote is not a misprint. A Plague So Pleasant seeks to explore the crushingly mundane aftermath of a worldwide plague. Unfortunately, the movie appears to be of two minds in terms of presenting its skewed view of the zombie apocalypse. The result is an intriguing, uneven film that doesn’t fully come together.

A Plague So Pleasant is largely set in the city of Terminus (hmm), where we meet a disillusioned young man named Clay Marshall (David Chandler). Through voiceover, Clay informs us that the zombie apocalypse occurred and that it claimed the lives of 2 billion people. However, he also tells us that it was over after about 12 hours, and now humans and zombies (semi-)peacefully coexist. In this world, zombies are actually an endangered species; they’re less a life-threatening menace and more of a docile nuisance.

The movie opens with a monologue by Clay’s creepy, loquacious friend Todd (Maxwell Moody). The main thrust of the story is that Todd wants to ask Clay’s sister Mia (Eva Boehnke) out on a date. Unfortunately, Mia’s boyfriend Gerry was one of the victims of the zombie apocalypse. Mia regularly visits her zombified boyfriend and remains blissfully in denial about his undead status. Clay ultimately decides to take drastic measures to help his sister move on with her life, and the results are disastrous.

I wasn’t very surprised to find that A Plague So Pleasant has two credited directors in Benjamin Roberds (who also wrote and edited the movie) and Jordan Reyes (also the film’s cinematographer). The story can’t seem to decide whether it wants to be a droll, poker-faced satire — Clay has to sit through an endless “Mandatory Undead Awareness Program” session at work that is straight out of a zombie version of Office Space — or go all in on its more surreal flights of fancy. The movie opens with an odd, indulgent monologue from Todd about how he’s a morning person. It’s a strangely off-putting way to start the film, but it is somewhat redeemed by the movie’s striking black & white cinematography, which makes thematic sense given the dreary world the characters inhabit. (The grungy black & white photography also subliminally links A Plague So Pleasant to George A. Romero’s Night of the Living Dead.)

It should be noted that Roberds, Reyes and the rest of their crew made this film for a reported $3,000 budget. Although I wish the movie had explored the “zombies-as-endangered species” angle of the story — that tidbit ends up being mostly beside the point — the filmmakers do an admirable job of stretching their dollars. The undead makeup effects are especially impressive, including a few close-up shots that hold up extremely well to scrutiny. The zombie extras also deserve kudos for their enthusiastic performances once all hell breaks loose and some color finds its way onto the screen. (And I’m not just talking blood red.)

On the other hand, I didn’t care for the drowsy, anesthetized aesthetic the filmmakers decided to employ. I get the notion that Clay and many other humans have become numb to the world, but the character’s voiceover narration mostly makes it sound like Chandler was given a heavy sedative before he recorded his lines. The 76-minute film also feels somewhat stretched to its breaking point, as many sequences (Todd’s monologue, singer-songwriter Gerry’s mournful song, the “Mandatory Undead Awareness Program”) drone on for way too long. It’s probably meant to put us in the mood of the characters in the story, but it winds up being largely irritating. (Speaking of irritating, the dissonant score sounds like Nine Inch Nails…on a chalkboard.) The only effective use of this technique, in my opinion, was the seemingly endless siren that blares for a good portion of the movie’s final act.

Out of the three main actors, I thought Boehnke was the only one who sparked. Chandler was handcuffed by his character’s sleepy demeanor, but makes for a solidly frazzled protagonist in the movie’s second half. Meanwhile, Moody — channeling a poor man’s Patrick Bateman — is neither scary nor charismatic enough to justify his extended screen time.

A Plague So Pleasant is ultimately way too leaden to live up to its brisk, chipper title. However, the film deserves credit for getting some bang (and plenty of bites) for its buck and trying to take a novel approach to zombie horror.