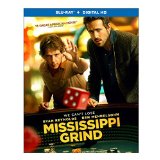 “I don’t care about winning. I just like to play, I really do.”

In Mississippi Grind, a pair of damaged gamblers hustle their way through the American South so they can buy into a high-stakes card game in New Orleans. That’s technically the “plot” of the movie, but it’s not really the point…nor is it where the film’s true charms lie. Instead, this well-made, low-key character dramedy feels like a welcome throwback to the sort of buddy/road films that have mostly been pushed out of multiplexes.

“Some guys are born to lose.”

The movie begins with a glimpse at a rather majestic double rainbow. The shot isn’t just a random cold open for the film; there are several references to rainbows in the story, which is fitting since we’re dealing with couple of born losers chasing their elusive pot of gold.

Gerry (Ben Mendelsohn) is a sad sack gambling addict in Iowa who obsessively listens to the same CD of gambling tips on his car stereo. During a low-rent poker game one night, he crosses paths with Curtis (Ryan Reynolds), an impossibly chatty, charismatic free spirit who instantly brightens Gerry’s life. Gerry begins to regard Curtis as something of a good luck charm as the men spend time together and bet on everything from card games and billiards to dog races and whether or not the next guy coming out of a public restroom will be wearing glasses. One of the many stories Curtis tells involves a major card game in New Orleans with a $25,000 buy-in. Gerry — who has pretty severe gambling debts — convinces Curtis to embark on a road trip down the Mississippi River, stopping in gambling halls and horse tracks along the way to earn their way into the high-stakes game in New Orleans.

Again, the card game might serve as the onus for Gerry and Curtis’s road trip adventure, but Mississippi Grind is much more about the journey than the destination. If the movie has one glaring flaw, it’s the occasionally on-the-nose writing; at one point, one character actually says, “the journey’s the destination.” Nevertheless, Mississippi Grind feels pleasingly and organically lived-in, which helps sell some of the story’s cliches.

“I just know it’s better to not be alone.”

Co-directors/co-writers Anna Boden and Ryan Fleck brought a similar quality to Sugar, their 2008 film about a Dominican baseball star feeling his way through the minor leagues in the U.S. Every dog track and cut-rate bar in Mississippi Grind looks and feels authentic. The filmmakers also take their time revealing the extent of their two main characters’ desperation. Gerry has an estranged family and owes buckets of money to a cheerily menacing loan shark (Alfre Woodard, quietly setting this movie on fire during her one scene), while Curtis gradually turns from amusingly compulsive to self-destructive.

It’s a subtle switch, and it works largely due to some terrific work from Reynolds, who has sneakily turned in a pair of effective performances in modest projects this year (Woman in Gold is the other) after a string of high-profile flops. (This is the part where I pretend Self/Less didn’t happen…which is pretty much what moviegoing audiences did anyway.) The role (originally slated for Jake Gyllenhaal) requires movie star charisma, which Reynolds has in spades despite the fact that he’s never fully been able to put it together on the big screen. Curtis has a seductive allure that makes it easy to understand how Gerry could get sucked in. He so thoroughly owns each room, that he doesn’t seem real. (I briefly thought Curtis might actually be a figment of Gerry’s imagination, but Mississippi Grind isn’t that kind of movie.) Naturally, Curtis and his stories turn out to be too good to be true.

Mendelsohn, a star in Australia, has earned recent acclaim stateside with his quirky, intense work in Netflix’s Bloodline, along with scene-stealing performances in indie projects like Slow West and Lost River. Here’s, Mendelsohn is the sort of familiar loser we’ve seen in movies like The Cooler and Hard Eight, but brings a believable heartbreak to Gerry’s plight. Since this is mostly a two-hander, the supporting cast is relatively thin. Sienna Miller pops up as the jaded woman who might be the love of Curtis’s life, but there’s also a chance Curtis has greatly embellished that relationship. (Just like he embellishes everything else.)

And besides, Mississippi Grind works because it’s really a (platonic) love story between a pair of gambling addicts. Both Gerry and Curtis are reflexive liars who use one another to feed their demons; in other words, they’re made for each other.

Mississippi Grind is presented in an aspect ratio of 2.40:1. The 1080p image is arrived at with an AVC MPEG-4 codec at an average of 19 mbps. As I stated before, one of movie’s strengths is its authentic, lived-in quality, which is nicely represented on this Lionsgate Blu-ray. There is pleasingly gritty, filmic grain right at the start, which immediately signifies the movie won’t be portraying the glitzier side of gambling. Even the vibrating neon signs inside the bars Gerry and Curtis visit feel appropriately dampened and subdued. That being said, there is some warmth and conventional beauty to be found here. In addition to that opening rainbow, we get some sun-soaked exterior shots, including one on a Mississippi river boat. Black levels inside those grungy bars aren’t always very inky, nor do they offer ideal shadow definition. On the other hand, the fine detail on close-ups is absolutely good enough for you to be able to spot tells on other poker players’ faces along with Gerry.

The DTS-HD Master Audio 5.1 track serves as a subtly effective complement to the action on screen. The blues-heavy soundtrack is bolstered by subs that may not shake your living room, but certainly help immerse you in the film’s atmosphere. There is terrific separation here, with all the dialogue pushed to the front, and the understated background noise (mostly crowd chatter, some ambient gambling machinery) pushed to the rear speakers. There’s honestly not much more to it than that. This is a dialogue-heavy track that does its job quite well.

Two of a Kind — On the Road with Mississippi Grind: (17:28) The filmmakers state they got the idea for making this film while working on Sugar in 2007 and visiting riverboat casinos during their down time. The cast and crew also name-check ’70s buddy/road flicks like Midnight Cowboy, The Last Detail, and Scarecrow as inspirations. We also get a glimpse at many of the real-life filming locations and Reynolds talks about how they added a crucial layer of realism. Presented in HD.

Mississippi Grind isn’t the flashiest gambling flick by a long shot, but it’s a worthwhile character study buoyed by impressive work from its two leads. (Reynolds, in particular, is worth the price of admission here…especially if you’re skeptical of his talents.)