Posted in: Disc Reviews by Jeremy Butler on January 1st, 2016 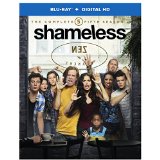 America’s most dysfunctional family is back for a fifth season. Showtime dramedy series Shameless, based on the popular UK series of the same name, continues with the same level of comedy and drama that has made it one of the network’s all-time popular shows. The Gallagher clan is always full of surprises, and this season is no different, especially when comes to the family matriarch, Fiona, who probably comes through the largest arc this season as always. Usually when a show reaches this point, it begins to show signs of tedium or signals that it is close to its end; however, that is not the case here, as the season 6 is expected to begin in January.

When we last looked in on the Gallaghers, Fiona was just released from jail and is now on probation. Mickey was worried about Ian, who was beginning to exhibit symptoms of his bipolar disorder. When Fiona wishes to hospitalize him, Mickey fights back and asserts that he will look after Ian. Frank the Plank awakens from his liver transplant to discover his marriage to Shelia. Told that the side effects of his transplant won’t be pleasant and he must refrain from drinking, Frank takes off with Carl and shares a drink with his way-underage son. The final scene was probably the most shocking, as a familiar face showed up outside the Gallagher house.

Now that we are all caught up, let’s talk about this season. Fiona is engrossed with her job, doing her best to stay on the straight and narrow, and finds herself drawn to her boss as well as Davis, a member of a local band. Before long, Fiona is off house arrest and married to Gus, a different member of the same band. (I know, the girl wastes no time right?) She quickly begins to realize sustaining a marriage takes work, especially with the reappearance of her first love, Jimmy, and her growing attraction to her boss, Sean.

Ian continues to struggle with his disorder with Mickey doing his best to be there for him. However, Mickey’s commitment to his child and baby mother create obstacles for the two’s relationship and results in Ian doing drastic things while in an imbalanced state. Before long, it becomes clear that Ian requires more than Mickey can provide.

The family genius, Lip, continues at college. Out of all the members of the clan, he appears to be the one who thrives and manages hookups with his older professor as well as running an illegal enterprise on the campus. This high doesn’t last long as Lip begins to experience troubles in both his personal and professional life. Younger siblings Carl and Debbie have a few obstacles as well. Carl, who was always one step away from juvie, gets his wish when he finally gets locked up, and Debbie explores her sexuality and has to deal with consequences.

Even neighbors Veronica and Kev aren’t immune to issues this season as they struggle with being new parents. With their circumstance there is an excellent role reversal, as Kev is the more attentive and focused parent while V (as she is known on the show) struggles more with her new role.

The season continues to maintain the balance of comedy and drama that viewers have grown accustomed to for the series. Much of the drama for this season comes from Ian’s predicament as he continues to struggle with his condition. Hats off to Monaghan, who manages to weather the highs and lows of the situation in a completely believable and relatable way. It is easy to feel for his character, and the chemistry between Ian and Mickey makes for most of the emotional dynamic of the season.

The fantastic theme of the series is family. That is essentially what the series is about at the end of the day. No matter what comes there way, in times of crisis the Gallaghers (with the exception of Frank, who is usually the cause of the problem) come to together to resolve the issue, which is high praise given the how much they generally overcome. Family first above all else, I believe is the true key to the series’ lasting success.

Season five fits in well with the ones that came before it, as if no time has passed in between them, much to the credit of the cast’s chemistry and script writing. This is one of the most unique series that I have ever come across in regard to script writing, because there are rarely major events taking place; it is mainly normal day-to-day things that you would expect to happen in life, but it is crafted in such a way that you remain engaged and anxious for the next episode.

Shameless is presented in aspect ratio of 1.78:1. The 1080p image is arrived at with an AVC MPEG-4 codec at an average of 16 mbps. I would rate the picture quality as average. The image is clear and concise, not at all grainy, but does not provide an immersive feeling. There is adequate detail provided to paint a clear picture of the ever-changing landscape; however, not enough for an immersive experience.

Shameless is a dialog-centered series, and the DTS-HD Master 5.1 track is well suited for the series. The audio remains well-balanced without the soundtrack or dialog overtaking each other. Although the audio does little in the way of immersive experience due to minimal background noise, there is little action that requires more than that. Dialog is clear throughout without the need to boost the volume to ridiculous heights.

Gentrify This Featurette (04:45): The cast and crew lead their opinions on this brief featurette about this season’s theme of gentrification.

Deleted Scenes (08:16): A group of scenes mainly from the second half of the season that didn’t make the cut. Despite not airing with their intended episodes, there are a few gem scenes, especially the scene cut from the Macy-directed episode.

Shameless Sex Love (15:48): An insight into the way love is handled in the world of Shameless from the perspective of the cast and crew. Also a very interesting distinction between love and sex in this series’ universe.

Season Five is a good time to be had and impossible to predict the direction that each character is heading in. Trust me, I tried. Still a refreshing experience after five seasons with the sixth set to begin on January 10. My advice, use this season to get you over the hump if you are already jonesing for the new season.

Jeremy Butler is a film school graduate of the International Academy of Design and Technology. He is been writing for Upcomingdiscs since 2012; however, movies have played a big part of his life for much longer. Favorite genres include horror, science fiction/fantasy, and comedy. Favorite movies are V for Vendetta, Boondocks Saints, Kiss Kiss Bang Bang, and The Godfather.
12 Days Of Christmas Giveaways – Day 7 Bucket Of Blood and The Bat On Blu-ray From Film Detective The Hateful Eight