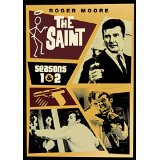 “Most women like a man with a bad reputation. Mind you, I’m not really bad. It’s just I’m not troubled by my wicked thoughts. In fact I rather enjoy them. It’s all perfectly natural. Man may have evolved from the trees, but his eyes still swing from limb to limb.”

Years before he became the iconic suave British secret agent with the license to kill, Roger Moore might just have put himself in the running through his six-year run on British television’s The Saint. The show was part of the British Invasion of spy shows that came close on the heels of the first James Bond film Dr. No. Moore played Simon Templar, known throughout the globe as The Saint. While Templar wasn’t really a spy, he acted like one most of the time, and the series managed to cover most of the conventions of the genre. There was always a pretty girl or two for Templar to either romance or rescue…often both. Like Bond, Templar was a globetrotter. Episodes took place all over the world. One episode might be in New York City, another in London, while the next two weeks took us from Rome to Paris by way of Monte Carlo.

But Simon Templar wasn’t a spy. He was a world-renowned thief who had decided to give up his life of crime and use his wealth to help those in need. He found his “clients” a variety of ways. Many were friends who called him for help. Others he saw in the news who had been taken by a con or were the victims of a frame or other unfortunate circumstance. Templar never charged for the services. He rather saw himself as a white knight and thus earned the reputation of The Saint. Still, the police officers he encountered were never completely convinced he had changed his stripes, and he was usually a prime suspect, or at least followed, whenever he encountered the police. He didn’t mind; in fact, he saw it as a bit of a cat-and-mouse game and often encouraged these treatments.

Each episode would begin with Templar looking straight into the camera and delivering a monologue about his surroundings. He might talk about the people or the place he happened to be. Often the monologue was really some wisecrack remark or odd philosophy statement. The monologue would inevitably be interrupted by someone who would mention him by name. Cut to Templar delivering a boyish grin and a halo appearing over his head. The halo would fade into the show’s trademark of a stick figure with said halo and the opening credits.

The series’ first season was shot and aired in England in October of 1962 but didn’t air in The United States until much later in May of 1967. It enjoyed a rather staggered broadcast history and didn’t really find its true audience until years later in syndication. The series would see an attempted revival show and a feature film with Val Kilmer as Simon Templar. None of these ever quite captured the charm and wit of the original series. This was Roger Moore at his best. Watching these episodes caused me to reflect just how much better a James Bond he might have made had he gotten the role at this point in his life and career. Of course, Sean Connery was doing a pretty good job of it himself at that time. Moore certainly demonstrates why he was often in the Bond conversation and why he became the heir to Connery eventually. The series even sported an episode where he is mistaken for Bond. Curiously, that episode also featured David Hedison, who was masquerading as an FBI agent. Of course, Moore would get to be Bond in several films, and Hedison would play his FBI friend Felix in Moore’s Live and Let Die and later for Timothy Dalton’s Bond in Licence To Kill.

Of course, the character was already an old and established one long before 1962. It started in a series of novels by Leslie Charteris in 1928. The character has been in radio broadcasts and early film serials. Something about Simon Templar continues to entertain audiences for almost 100 years. But no one portrayed him with more style than Roger Moore. Now you can see the first two seasons on this hefty 10-disc release from Timeless Entertainment. Unfortunately, there aren’t any extras except for a handful of audio commentary tracks. It’s a wonderful show that’s become somewhat of a period piece that has returned to form these days. Simon Templar is always good for “fun, for laughs, for excitement“.

Gino Sassani is a member of the Southeastern Film Critic's Association (SEFCA). He is a film and television critic based in Tampa, Florida. He's also the Senior Editor here at Upcomingdiscs. Gino started reviewing films in the early 1990's as a segment of his local television show Focus. He's an award-winning recording artist for Omega Records. Gino is currently working on his 8th album Merchants & Mercenaries. Gino took over Upcomingdiscs Dec 1, 2008. He works out of a home theater he calls The Reel World. Favorite films: The Godfather, The Godfather Part II, The Body Snatcher (Val Lewton film with Karloff and Lugosi, not the pod people film), Unforgiven, Gladiator, The Lion King, Jaws, Son Of Frankenstein, The Good, The Bad And The Ugly, and Monsters, Inc.
Rise of the Krays Zoolander 2