Posted in: Disc Reviews by Archive Authors on April 13th, 2016 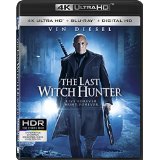 “Witches live among us. Their magic passed from an ancient race, diluted, half-forgotten, but dangerously powerful. After centuries of conflict, a truce was forged. Witches would be allowed to live and govern themselves if they followed one strict rule: that magic never be used against humans. But a truce is a fragile thing…”

Vin Diesel has made the Fast and Furious franchise into a massive global behemoth, but Diesel is not a global behemoth on his own. He has had successes and failures. He is someone who seems to be an unlikely star. He tried to make Riddick (Pitch Black, The Chronicles of Riddick, Riddick) into a multi-film franchise and accomplished it through sheer force of will, but his stardom largely rests on Fast and Furious. Diesel bristles at being typecast, so he has always tried to find new vehicles that will demonstrate his range. XXX was a big success, but Diesel did not appear in the sequel. XXX: The Return Of Xander Cage is on the schedule for 2017. He walked away from Fast and Furious for a few installments because he was so intent on diversity, but eventually relented and came back. The Last Witch Hunter is his latest attempt to start a new franchise. The film was attacked by some critics when it was released, but it is a pretty decent attempt to create a new legend out of a cauldron of Dungeons and Dragons ideas. That was the inspiration, and a group of script writers did a decent job, and the director Breck Eisner (son of Michael) also does a good job. The cast includes Sir Michael Caine, Elijah Wood, and Rose Leslie (wildling Ygritte from Game of Thrones). It also includes excellent actors such as Isaach De Bankole as a male witch who runs a restaurant that sells pastries that includes ingredients such as hallucinogenic bugs. All the elements are in place to make a great movie experience. The problem is that there is a weak link. It’s Diesel.

Diesel is trying to force himself into projects that are an ill fit for him. In this movie he makes repeated attempts to smile throughout the battles with various witches, but every time he does it in this movie it seems awkward. There is a hint of romance with Leslie, but it disappears in smoke. Diesel says he grew up a passionate fan of Dungeons and Dragons, but that would make him a nerd. I think Diesel is a nerd, but that is not his image. His image is a scowling, grumbling bag of meat. Diesel wants to project intelligence, but it sounds odd coming out of that package. The simple fact is that he is not a great actor. He does a few things very well, but, as is demonstrated in this film, he can fumble simple things like jokes and smiles. Diesel gave a great performance back in 2006 in the film Find Me Guilty by the late great director, Sidney Lumet. What that tends to suggest is that a great director might be able to use Diesel to much better effect. That was also demonstrated in Steven Spielberg’s film Saving Private Ryan. I’m saying that if the film The Last Witch Hunter was not controlled by Diesel as a producer but was under the control of a great and visionary director, some of these problems probably would have been corrected. One of the reasons that has not happened is that might be too great a clash of egos. One of the best things Diesel might do eventually is to try to let go of his ego. That’s not likely to happen when all he’s interested in doing is creating film franchises.

The Last Witch Hunter is presented in its original aspect ratio of 2.40:1. The 2160p image is arrived at with an HEVC codec at an average 25-30 mbps. The ultra-high-definition (4K) image presentation is certainly quite stylized. The film makes heavy use of color correction as well as tons of computer images. Think of Underworld on steroids. There’s a definite cold blue tint to the color palette. The disc reproduces that to perfection. The image is razor-sharp with nice transition between computer world and reality. That’s a pretty important aspect, because the CGI is not always the best quality. But it blends well enough to work quite effectively. Black levels are impressive with very deep inky blacks with fine shadow definition. What I think stands out most here in 4K is fire. There is a sudden brilliance and deep vivid color to flames in this version that only existed to a point in the original film. Another standout is the camera flares. You would have thought JJ Abrams was a part of the production team. I have to say it didn’t stand out as much on Blu-ray. Here they are far more in your face. The superior contrast pushes them more to the forefront of the image presentation.

The DTS-X 7.1 is impressive. The sub response is powerful and will rock your room. The underwhelming aspects of the Blu-ray are corrected here. There is far more life to this mix without it being substantially different at all. I think it’s the depth and more crystal-clear separation that does the trick here. Just the added dynamic allows you to pick up nuances in the mix that were not so apparent previously.

No extras on the 4K disc. A Blu-ray copy is exactly the same as the original Blu-ray release.

Diesel has said he wants sequels to The Last Witch Hunter, and I agree with him. We all assume that if it isn’t a huge hit that enthusiasm to make sequels will have died, but that doesn’t take into account Diesel’s determination. And besides, maybe he is learning some humility and is open to correcting the problems his ego might have caused. Maybe The Last Witch Hunter II will be a better movie.