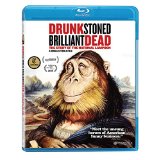 “Due to the explicit sexual nature of the following National Lampoon Radio Hour, it’s featured as adult entertainment and not recommended for children’s ears without parental supervision.”

Even if you had no idea it originated as a magazine, the name “National Lampoon” instantly conjures images of raunchy, subversive, anti-establishment humor. That’s how strongly the iconic comedy brand managed to embed itself into pop culture. (In addition to the magazine, there were stage and radio shows along with at least two classic movies.) This dynamic, uproarious, and aptly-titled documentary does a very good job of illustrating how that happened.

Although I reckon most people these days know the name National Lampoon because it appears in front of beloved comedies like Animal House and Vacation, Drunk Stoned Brilliant Dead wisely emphasizes the brand’s origins as a groundbreaking magazine. (Full disclosure: I have a degree in Magazine Journalism, so it’s very possible this might just be me nerding out.) Naturally, the film covers the other multimedia ventures that helped make household names out of the likes of John Belushi, Chevy Chase, Bill Murray and more, but it all started with a pair of cheeky Harvard graduates.

Doug Kenney and Henry Beard, who’d previously written for the Harvard Lampoon, started the magazine with a big assist from publisher Matty Simmons. Kenney (a born performer who communicated in Thackeray prose) and Beard (the equally hyper-intelligent, more reserved part of the duo) are credited with giving Lampoon its smart, savagely satirical voice from the beginning. Their magazine went “National” in 1970 after a parody issue of Mademoiselle magazine landed them gigs spoofing everything from Playboy to Tolkien. Simmons is presented as the more business-minded member of that key troika, and the one who eventually pushed the Lampoon brand into other media.

But, again, Drunk Stoned… is in no hurry to get there. Director Douglas Tirola — who co-wrote the film with Mark Monroe — has assembled an impressive collection of Lampoon contributors who helped change the face of American comedy. The documentary makes a compelling case that National Lampoon was a pioneer in anti-establishment humor; it doesn’t take much to connect those dots to the anti-establishment artistic spirit that took hold in the 1970s.

In addition to Beard and Simmons, the standout contributors in this film include art director Michael Gross (who unlocked a major part of the Lampoon’s humor by making a lot of the magazine’s pieces look almost identical to what they were spoofing), P.J. O’Rourke (who co-created the 1964 High School Yearbook parody with Kenney), and Tony Hendra (the British satirist who did a spot on John Lennon spoof — “Magical Misery Tour” — on “Radio Dinner,” the Lampoon’s first album). The movie is stronger when it sticks to people who were on the Lampoon’s front lines, rather than when it randomly throws in a sound bite from Billy Bob Thornton.

“It was incredibly dark, extremely political…and it was funny.”

Then again, for me the greatest pleasures in this film stem from rediscovering (or discovering) the provocative pieces that offended a large number of people put Lampoon on the map. Those pieces have titles like “Telling a Kid His Parents Are Dead”, a spread that imagined Hitler had somehow survived World War II and was living on a tropical island (starring a Hitler lookalike), and the magazine cover that famously put a dog’s life in the hands of potential readers. Of course, Kevin Bacon — who co-starred in Animal House — readily admits that he rifled through each issue of Lampoon hoping to see boobs. The film makes the point that Lampoon was an equal opportunity offender that didn’t have a particular political bent; they were just as likely to make anti-Semitic jokes as they were to do anti-Nazi gags. At one point, the magazine’s fanbase is scornfully referred to as “well-to-do” nobodies.

The second half of the film covers Lampoon’s expansion into other media, which helped launched the careers of Belushi, Chase, Murray, Gilda Radner, Christopher Guest, and more. (There’s also more than a hint of bitterness over the 1975 premiere of Saturday Night Live, which raided a lot of the talent Lampoon helped discover.) Even though the movie includes input from people like Mike Reiss — who joined the Lampoon in the early 1980s before going on to serve as showrunner for The Simpsons —Drunk Stoned Brilliant Dead gives short shrift to the magazine’s latter years. (From watching the film, you’d never guess National Lampoon was around until 1998.) I realize those weren’t exactly the golden era, but it also feels a bit disingenuous to act like those years didn’t happen. (Especially since the rest of the film is so comprehensive.) It also seems as if the words “Mad Magazine” were carefully expunged from the record.

Those are relatively minor quibbles, however, considering that Drunk Stoned Brilliant Dead gleefully lives up to its title. The people who are featured in the film speak reverently (and candidly) about the key contributors (Belushi, Kenney, Michael O’Donoghue) who are no longer with us. In fact, rather than concluding with the end of National Lampoon, the documentary wraps up with Kenney’s ambiguous death. It’s not hard to infer that the documentary considers the demise of Kenney and National Lampoon to be one in the same.

Drunk Stoned Brilliant Dead: The Story of National Lampoon is presented in an aspect ratio of 1.78:1. The 1080p image is arrived at with an AVC MPEG-4 codec at an average of 36 mbps. This is certainly a livelier presentation than you ordinarily get from a documentary. The customary talking head interviews are augmented by subtly animated segments that add life to vintage National Lampoon pieces. Those segments feature both vibrant splashes of color and impressive contrast when the graphic on screen is in black and white. Otherwise, this is a pretty typical documentary presentation — sharp looking present-day interviews mixed in with appropriately grainy archival photos/footage. (That footage includes funny stuff from National Lampoon: Lemmings and studio sessions from the The National Lampoon Radio Hour.)

The DTS-HD Master Audio 5.1 track is (not surprisingly) driven by dialogue, which is presented clearly throughout the film. However, the entire sound field only truly comes to life when the movie busts out a classic tune, including Chuck Berry’s “School Days” and King Floyd’s “Groove Me.” More impressively, the movie prominently (and presciently) features a pair of David Bowie tracks — “Jean Genie” and “Changes.” (I imagine those songs were locked into the film prior to Bowie’s death in January.)

John Goodman Reads Doug Kenney: (1:18) The actor does a dramatic reading of an excerpt from Kenney’s “First Blow Job” piece.

Thoughts on Animal House: (10:17) Directors Ivan Reitman and John Landis (the latter directed Animal House), along with cast members Tim Matheson, Kevin Bacon, Stephen Furst, Karen Allen, and more recall the making of the comedy classic, despite minimal support from the studio. (Landis didn’t have access to dailies and wasn’t even given an office.)

Drugs in the Office: (2:04) A few writers and artists have varying opinions on the amount of drugs in the National Lampoon office. (Thoughts range from “never saw any drugs” to “$2,000 worth of coke.”

Jaws 3, People 0: (1:56) Simmons had an idea for a comedic follow-up to the underwhelming Jaws 2, and money was even spent on a fake shark before the plug on the project was suddenly pulled. It’s strongly suggested Steven Spielberg had a hand in killing Jaws 3, People 0, which is a shame because it actually sounded pretty funny. (Orson Welles would’ve appeared as author Peter Benchley at the start of the film.)

Working in NYC: (1:09) A few Lampoon artists reminisce about the creative (and grungy) mecca that was New York City in the early ’70s.

Thoughts on SNL: (2:11) Lampoon contributors state (probably quite fairly) that Saturday Night Live wouldn’t have existed without National Lampoon. Although there are obviously some sour grapes there, the same contributors acknowledge that no one could’ve predicted how huge SNL would become.

Reading John Hughes — Beverly D’Angelo, Kevin Bacon, Stephen Furst, Anthony Michael Hall, and Chevy Chase: (7:12) The actors read excerpts from three Lampoon pieces written by Hughes: “How to Tell What Girls are Like Under Their Clothes”, “My Vagina”, and “The Hughes Engagement Guide.”

Artists of National Lampoon: (3:39) Art directors Michael Gross and Peter Kleinman get their due in the theatrical cut, so this featurette shines a light on some of the artists who did the grunt work for Lampoon.

Chevy Chase “Seeds” Story: (2:16) The actor cheerfully tells a funny story about trying to help Bill and Brian Doyle Murray score weed on the set of Caddyshack. They end up buying “dirt weed” (basically a bag of seeds) from Rodney Dangerfield. (Yes…they smoked it anyway.)

Drunk Stoned Brilliant Dead does a marvelous job of showing why Lampoon mattered. Early in the film, John Landis suggests that National Lampoon struck a chord because it was created by (and largely written for) young people with a sense of adventure. (“Babies” who didn’t know any better.) Even though it’s essentially about a defunct magazine from 45 years ago, this documentary captures that youthful verve.

I definitely recommend you check this out if you’re interested in seeing the making of a comedy institution. (Assuming you’re not easily offended, of course.)