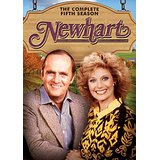 Bob Newhart is one of the last in a dying breed of comedians, at least on television. He had a reserved, almost deadpan delivery that drew your attention not because of raunchy material or manic display of hijinx. He was obviously comfortable with being the brunt of all of the jokes. His half embarrassed and half sly-dog grin become a staple in our living rooms for four decades. Newhart was his second situation comedy following a respectable run as a stammering psychologist with a wacky set of patients and friends. The Bob Newhart Show ran from 1972 to 1978. Just four years later Bob was back on our television screens with Newhart, and it was as if he hadn’t missed a beat. Newhart would better those six years by running from 1982 until 1990. Bob Newhart may not have a ton of range as a comic actor, but the television personalities he created in both The Bob Newhart Show and Newhart were lovable enough to bring great success to both of the shows. One could safely admit that he was really playing the same character in both, and the final episode of Newhart pretty much acknowledged that fact with one of the more clever series finales in television history. Bob Newhart will always be remembered as a television icon.

Dick Loudon (Newhart) once worked as a successful advertising executive. He gave up the lucrative job to follow his dream of becoming a writer which led to a nice run of “how to” books. Now he’s ready to try his hand at something else. He and wife Joanna (Frann) buy an historical Vermont inn and try their luck as innkeepers. Their second maid was Stephanie Vanderkellan (Duffy), the spoiled daughter of a super-rich New England family. Dick also does a local television show called Vermont Today, which is produced by Stephanie’s boyfriend, the equally superficial Michael Harris (Scolari). The two of them take “cute” to a pretty much nauseous level. The inn is kept in shape by their inherited handyman George Utley (Poston). George reflects the town’s slow and often naive lifestyle. He has a hard time identifying with anything but being a handyman. He’s kindhearted to a fault and pretty much becomes a part of the Loudon family.

Much of the comedy comes from the collection of recurring characters, the most famous of these being the hillbilly brothers Larry, Daryl & Daryl. Larry is the only brother who ever speaks. There’s a running gag in the series that he introduces himself and his brothers before starting any conversation. They became wonderful foils for Dick, who was too nice a guy to point out their many shortcomings. They were always dirty. Often carrying a “critter” in a burlap bag, they regaled the stunned speechless innkeeper with their backwoods lifestyle and exploits. They became favorites on the show and eventually opened up a cafe next to the hotel where few dared to eat. By the fifth season they would at least make a token appearance in every episode. While I often find them to be one of the funnier aspects of the show, I did discover that it wears a little thinly when binge-watching the series, several episodes at a time.

Other locals placed there to make Dick’s life a little harder include Officer Shifflet (Susman) who might have had less of a crew than South Park‘s Officer Barbary. He was slightly less competent than Andy Griffith’s Barney Fife. There was city council member Chester Wannamaker (Lanteau), who found a way to turn anything Dick said against him.

The show rarely relied on guest stars. Most of the comedy was mined from the characters on the show and the various situations they would find themselves in. Most of it was Dick’s inability to completely grasp the logic of the people around him. This season would feature one rather nice guest appearance. The season’s final episode has Michael’s television station running a Gilligan’s Island marathon over the Memorial Day Weekend. When Stephanie is called away to host a baby shower back home, Michael hangs out with George’s Beaver Lodge buddies. They end loving him because he was running the Gilligan’s Island marathon and think he somehow knows the cast. Of course, these Beaver characters include one Russell Johnson, who indeed played the Professor on the classic series.

Memorable episodes also include an episode where the brothers name their pet pig after Stephanie. Dick rather enjoys the joke until it’s discovered that their oinker was actually a he instead of a she, requiring a name change that Dick doesn’t find quite so funny. Another episode finds Dick frustrated with his life and spending a vacation at a dude ranch where he discovers the Old West isn’t quite what he expected. It’s a great look at modern political correctness run amuck. George joins Dick in New York for one of his publisher’s parties. Dick is worried that his handyman won’t fit in, but it’s George and not Dick who becomes the life of the activities. The brothers want non-lawyer Dick to represent them in court when they are framed for stealing a neighbor’s cow. Of course, Dick is reluctant at first, but turns into a cliché television lawyer who almost blows the case. One of the better episodes come near the end when Dick and Joanna have a nighttime fight and Dick looks for a place to sleep while trying to avoid giving up the fight’s details.

This was the show at its peak. It ran for three more years and continued to dominate in the ratings to the very end. Sadly, actress Mary Frann would pass away a few years later of cancer, and Tom Poston was finally lost to us in 2007. Peter Scolari would end up having a nice run on Gotham as Commissioner Loeb. William Sanderson, who played Larry, had a nice run on HBO’s vampire series True Blood as the sheriff.

There’s no question that the series feels a bit dated, more than I expected. Still, Newhart’s delivery is enough of an entertaining distraction that there are plenty of laughs to be found here. You get all 24 episodes on three discs with no extra. The image is pretty rough, but it’s likely the best that you’ll see. It’s a nice way to visit with Newhart for a while without spending an arm and a leg for a night at the Stratford Inn. If you can’t get enough from Newhart, “and how about that show with the shrink who stuttered?

Gino Sassani is a member of the Southeastern Film Critic's Association (SEFCA). He is a film and television critic based in Tampa, Florida. He's also the Senior Editor here at Upcomingdiscs. Gino started reviewing films in the early 1990's as a segment of his local television show Focus. He's an award-winning recording artist for Omega Records. Gino is currently working on his 8th album Merchants & Mercenaries. Gino took over Upcomingdiscs Dec 1, 2008. He works out of a home theater he calls The Reel World. Favorite films: The Godfather, The Godfather Part II, The Body Snatcher (Val Lewton film with Karloff and Lugosi, not the pod people film), Unforgiven, Gladiator, The Lion King, Jaws, Son Of Frankenstein, The Good, The Bad And The Ugly, and Monsters, Inc.
Independence Day: 20th Anniversary Edition (Blu-ray) Manson’s Lost Girls